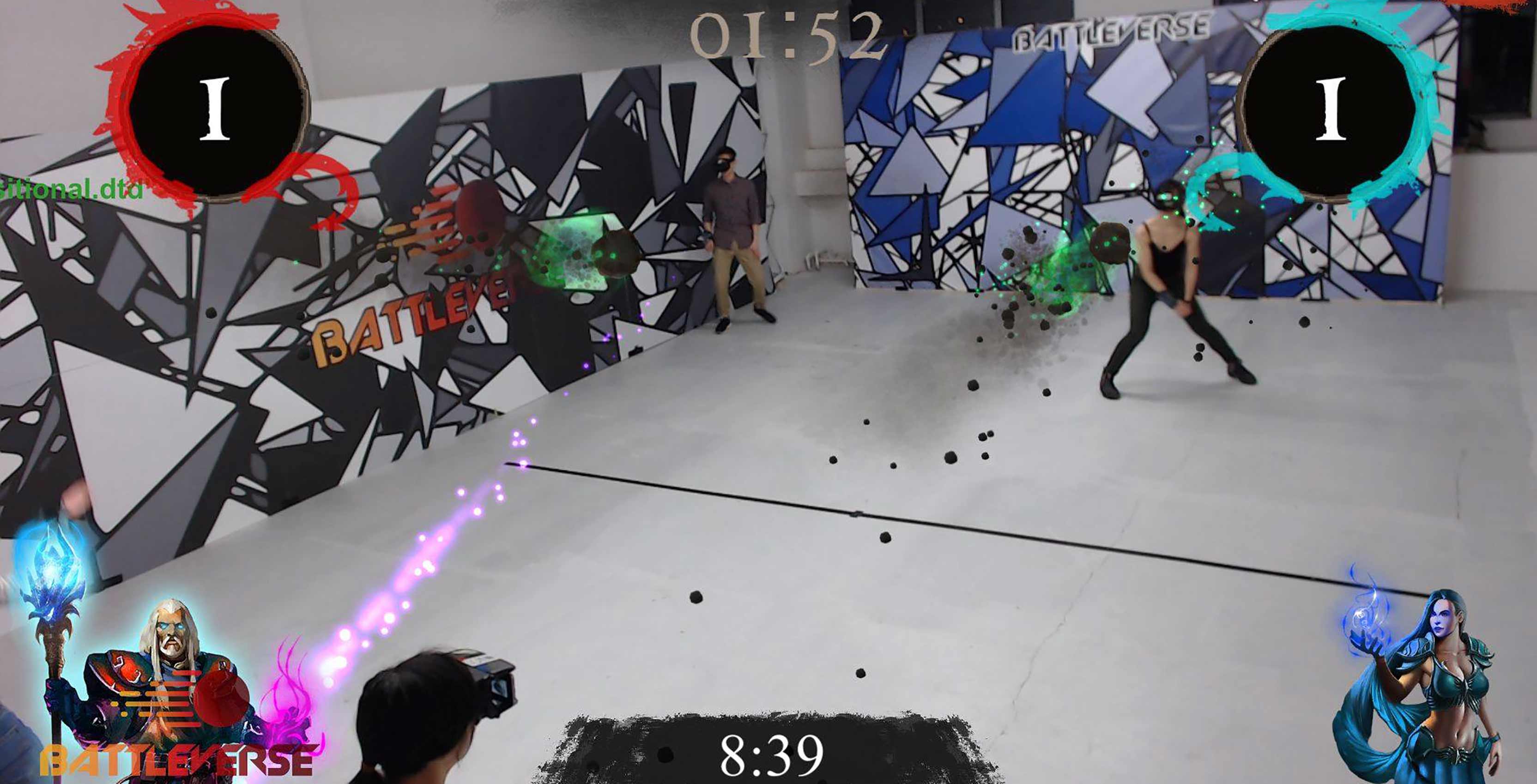 One of the disadvantages of most virtual reality headsets is being encumbered by a large, expensive rig of hardware. While less immersive, augmented reality can be very effective at keeping bulky tech to a minimum by bringing the digital world into the real world.

At last week’s VRTO conference in Toronto, I went hands-on with the Battleverse experience and came out quite entertained. The premise is simple: by using an Android smartphone and wireless AntVR headset, players will be able to engage in magic-based duels through augmented reality.

With the phone strapped to your hand, you’ll be able to extend your arm to fire digital spells at your opponent, which will then be seen flying through the air in the real world in your headset’s visor. The headsets and phones keep track of when attacks have landed and players will lose health accordingly.

However, because this is all going on in the physical space around you, agile players may even be able to dodge certain attacks, making it feel much more active than your standard VR game. It‘s a pretty cool feeling to be able to shoot colourful magic effects out of your hand while evading incoming fire. You’re encouraged not to blindly blast away, though, as your spells are tied to a magic metre visible in the headset. Once depleted, you’ll need to lower your arm to your hip and wait until it recharges, during which time dodging is particularly crucial.

This is where the WoW comparison feels particularly appropriate, adding a slight MMORPG-feel to Battle Mages. Teams are encouraged to work together by choosing a combination of classes that complement each other. Special abilities are triggered by tapping the smartphone, with a cooldown period taking effect afterwards.

Altogether, Battle Mages is made up of four game modes:

It’s important to note that my demo was set in a somewhat small area in Ryerson University’s Rogers Communications Centre building, which limited what VRTO attendees could try out to 2v2 Domination matches. That’s no fault of the actual game, though, and Battleverse’s actual Scarborough location is able to support up to eight player matches. While I haven’t yet experienced matches of that size, it’s easy to imagine how the mixture of offensive and defensive abilities in larger groups can lead to even more dynamic experiences.

All in all, I found Battle Mages to be a very clever use of augmented reality. By freeing up a lot of what can make VR restrictive (namely, an abundance of hardware), Battleverse has found a way to create an experience that makes the most of both the real and digital worlds.

If you’re interested in checking it out for yourself, Battleverse is located on 1510 Birchmount Rd in Scarborough, Ontario. Pricing begins at $29.95 CAD per player for 30 minute sessions.