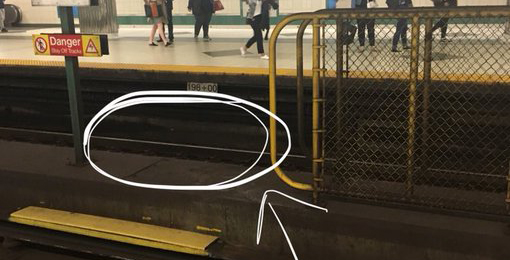 While Toronto’s system is an undeniably delayed, overcrowded mess, the authorities’ customer service Twitter account is often a ray of hope in the dingy darkness of the subway tunnel.

@TTChelps often replies to rider’s complaints, regardless of how profanity filled they are, offering suggestions, advice and just generally acknowledging that yes, sometimes public transit really does suck.

In what will surely go down as the feel-good story of the summer, according to a recent story published by BlogTO, a tweet sent to @TTChelps even recently resulted in a woman getting her AirPods back after they accidentally fell out on the subway tracks.

They are located near the television close to the Hayden street exit staircase at Bloor and Younge station southbound tracks. I’ve added a photo of the whereabouts. It is on the side of the tracks that is most closest to the platform. Thank you again! ?? pic.twitter.com/La3SZ51WIx

“I lost my new apple earbuds today at Yonge and Dundas station,” said Areti Tzanetakis in an email to BlogTO. “TTC was amazing at receiving them within the same day I dropped them onto the tracks…. Please give some love to TTC.”

Within a half our of the original Tweet, the TTC replied stating that it was beginning to work towards locating the lost AirPods.

Yes!! Shoutout KM and RA! Shoutout the gentlemen who grabbed them from the tracks and the nice lady who helped us (they were soo accommodating it made our day!!) here’s @itera_05 and her reunited AirPods! pic.twitter.com/hzbST0bfeJ

Approximately 15 minutes later, the TTC asked if they could come and pick up the AirPods following peak service.

Then, by 9pm, Tzanetakis got her AirPods back, proving transit miracles do happen.