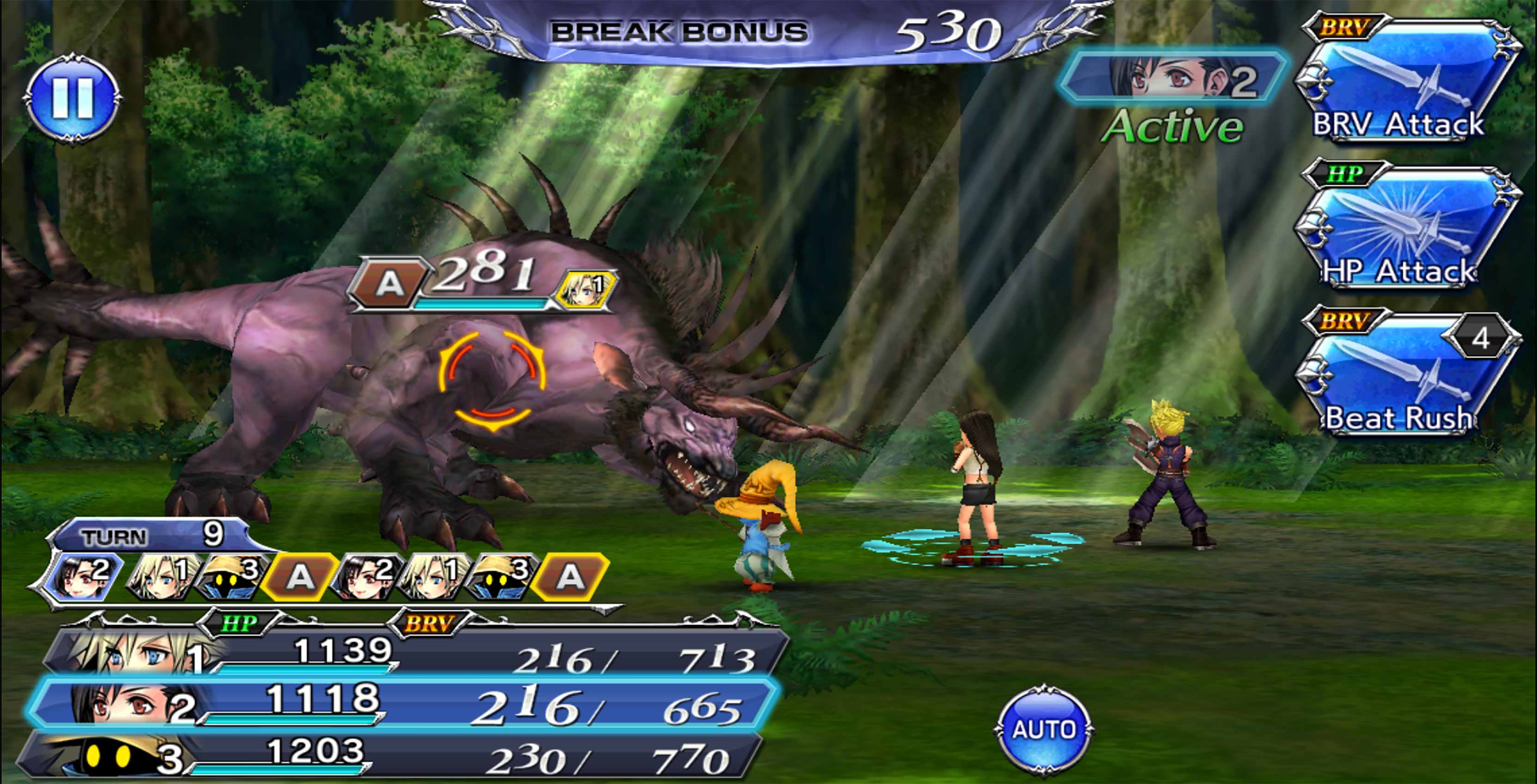 I’ve always wanted a turn-based RPG that lets you create and customize a party made up of characters from all of the Final Fantasy games.

In the free-to-play mobile game, the world has been torn apart in a battle between two deities, the benevolent Materia and the hate-filled Spiritus. To help turn the tide of the war, each god calls forth champions from other worlds — champions you may recognize as fan-favourite heroes and villains from various Final Fantasy games.

It’s a hackneyed set-up, to be sure, particularly given that it’s basically the same plot as the first two Dissidia games on the PSP, only with Materia and Spiritus replacing Cosmos and Chaos, respectively. Narratively, though, it does tie in to the recently released Dissidia Final Fantasy NT on the PlayStation 4, adding some incentive to play both. (Stay tuned for my review of the console game next week.) 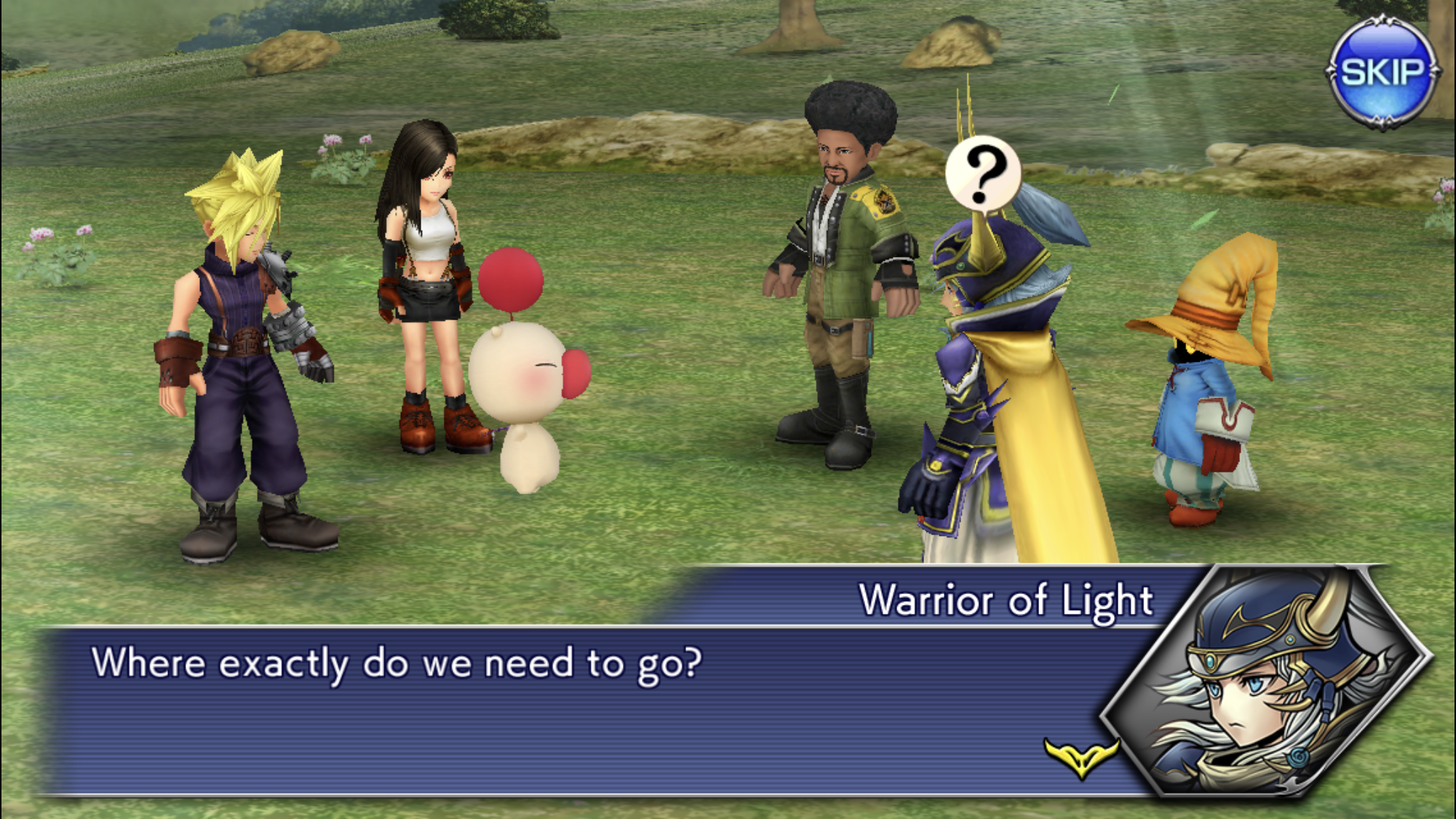 As is the case with many of the games these characters are from, Opera Omnia focuses on turn-based combat, this time using a party of three Final Fantasy characters of your choice. However, in ditching the traditional HP/MP system, Opera Omnia uses the Dissidia games’ hallmark Bravery mechanic instead. 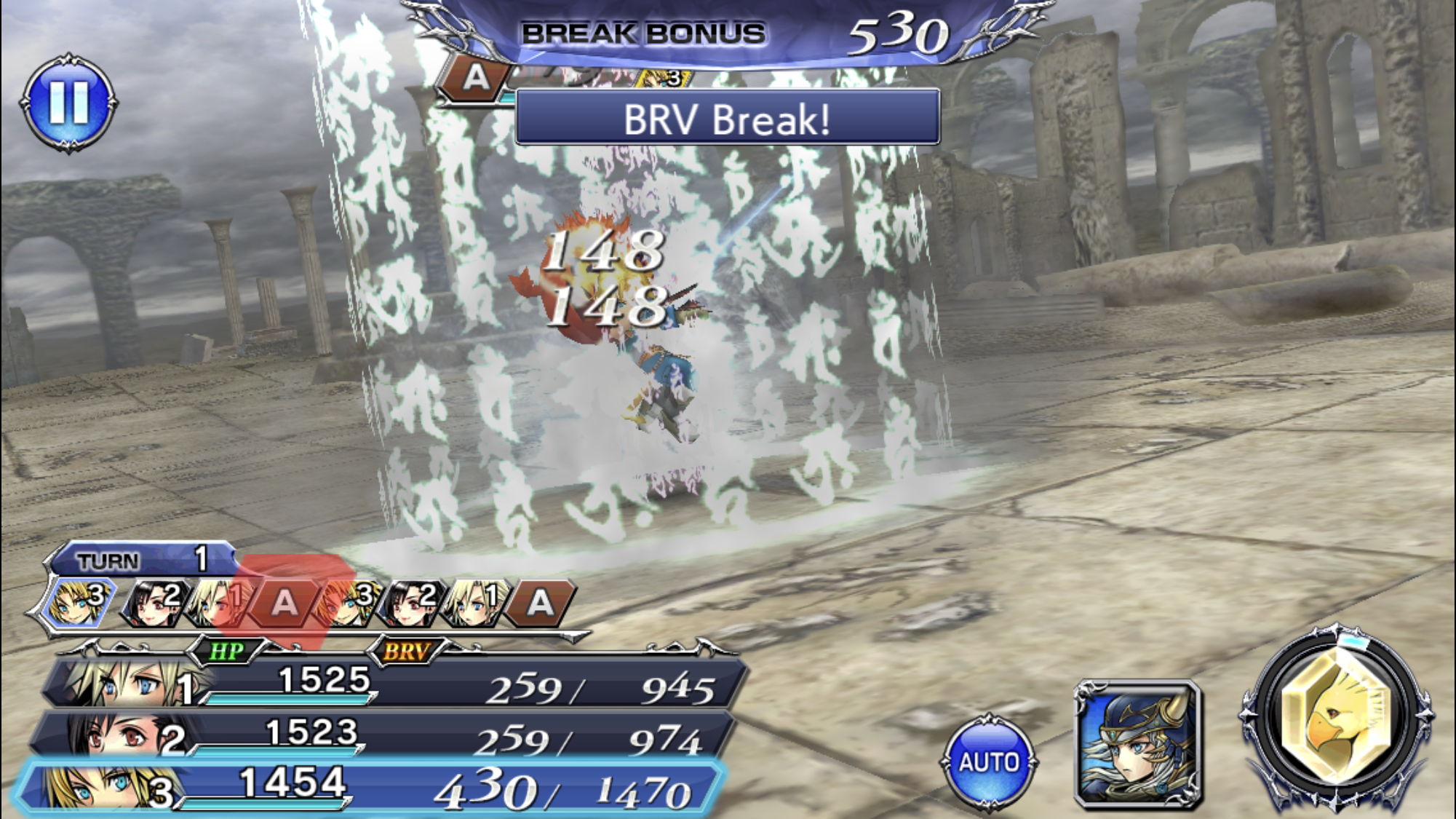 Characters have two different kinds of attacks — Bravery and HP. The party and enemies all have a Bravery count, which can be reduced by performing Bravery attacks. The higher your Bravery is, the more damage you can deal with an HP attack. The catch, though, is that performing an HP attack will drop your bravery count to zero.

This can be dangerous, as dropping a Bravery pool below zero will “Break” a combatant, greatly increasing the attacker’s Bravery count while leaving his foe in a stunned state. Both players and enemies can take advantage of this system, so it’s important to keep track of whose turn is next and plan your moves accordingly. 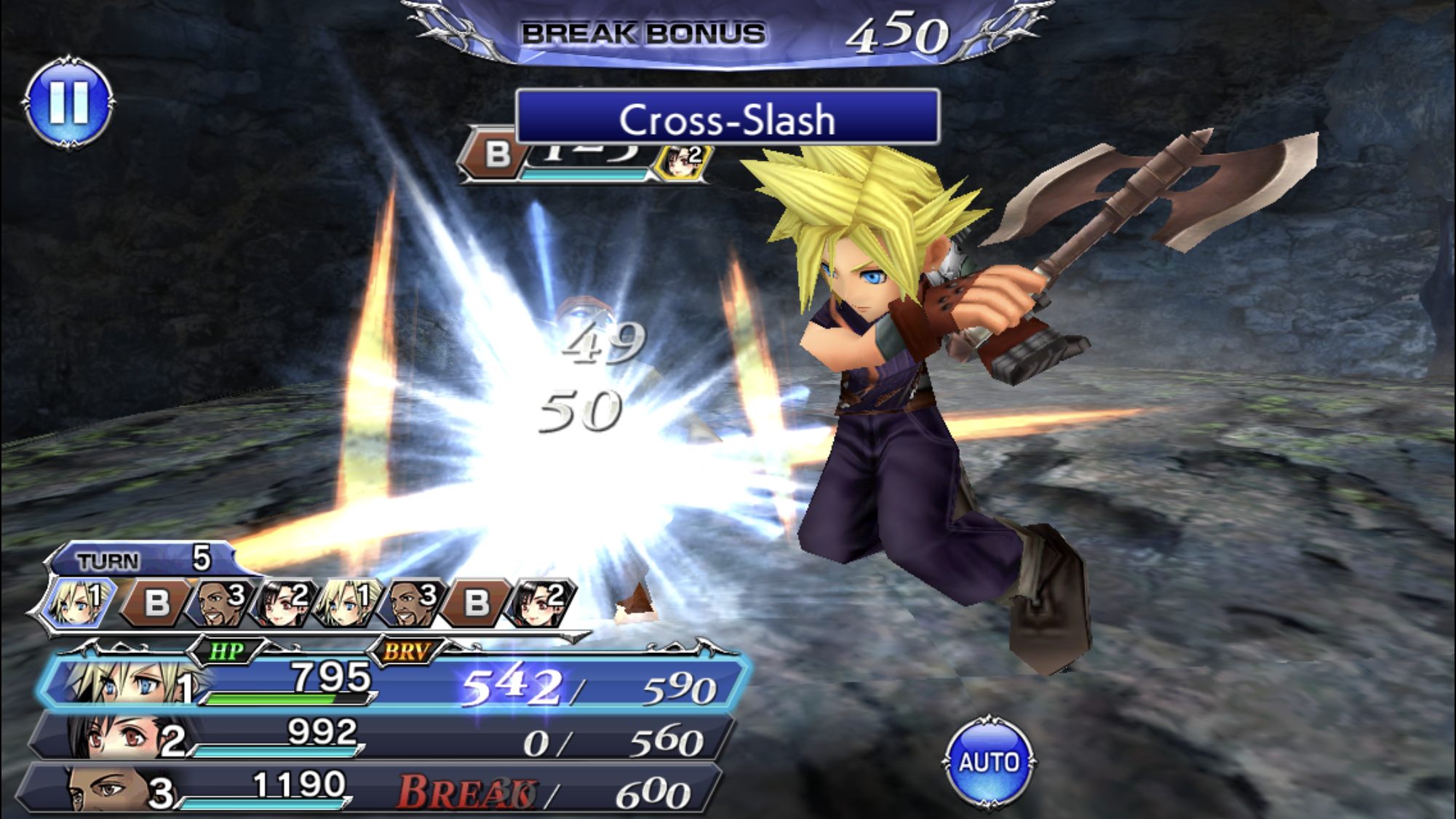 To encourage a team dynamic, having multiple characters attack the same enemy can trigger a Knock Back, allowing the party to take turns stylishly pummelling an airborne foe to deal extra damage. Throughout all of this, characters can also use special moves pulled right out of their games, such as Cloud’s Cross-Slash Limit Break, Tifa’s Beat Rush Bravery attack or Zidane’s Stellar Circle 5 Trance ability.

To further add to the great fan service, Opera Omnia will occasionally use some of the fantastic music of various mainline Final Fantasy games during key moments of the game. Hearing Final Fantasy VII‘s stellar battle theme play during Cloud’s introductory fight had me grinning and humming along right away. 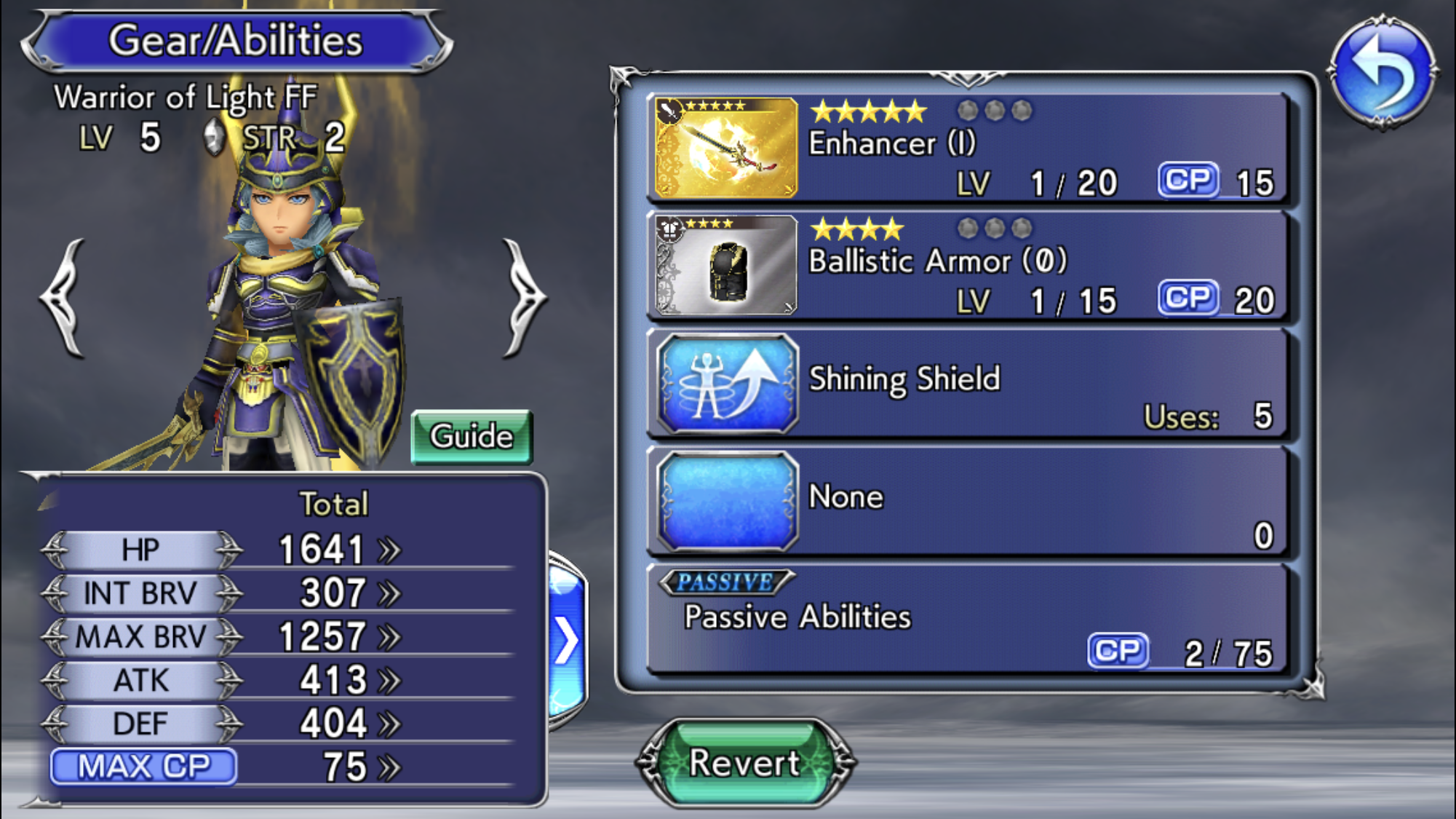 It’s also worth noting that so far, Opera Omnia has also been rather lax in its push for microtransactions. The game doles out new equipment, abilities and gear-enhancing items rather consistently, especially through daily login bonuses and mission completion (such as getting a character to level 10) and timed events. As a result, I haven’t ever felt required to use real money to buy in-game currency, with in-app purchases instead serving as a nice optional method of gaining resources more quickly.

While Opera Omnia‘s story may be trite and filled with clichéd dialogue, I still find myself eager to keep on playing to see which new characters I’ll meet next, as well as to further build my party with new equipment and abilities. For a massive Final Fantasy fan like me, Opera Omnia is a well-made love letter to series — one that I plan to take with me on the go for quite a long time.