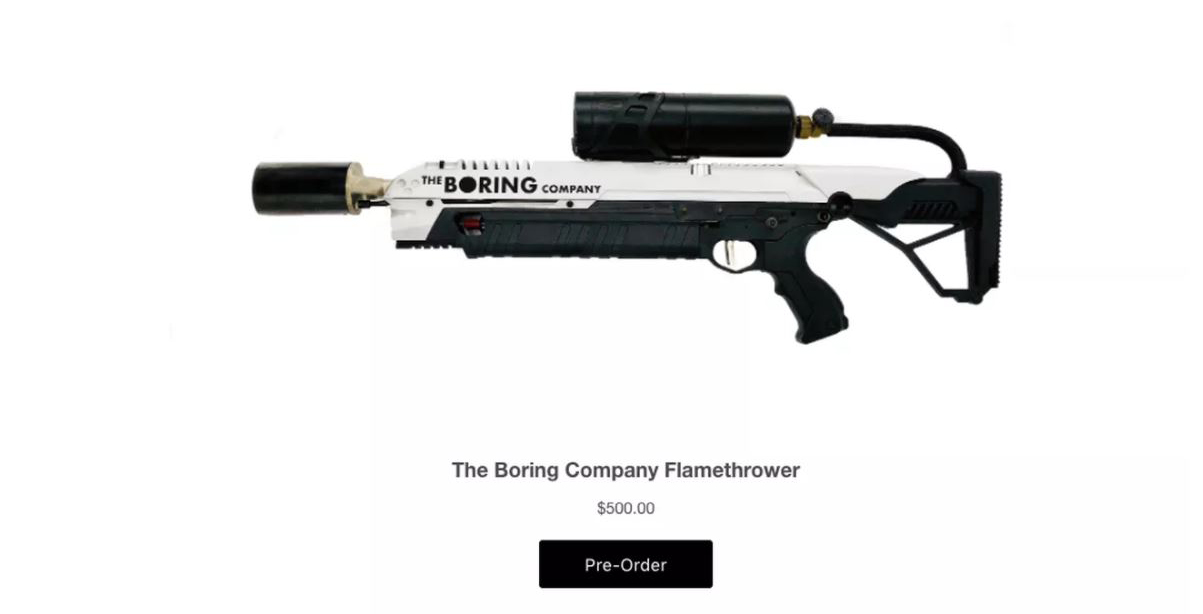 Elon Musk’s Boring Company has now started to accept pre-orders for its new flamethrower — yes, you read that correctly.

This is not the first we’ve heard of the company’s mythical flamethrower either. Musk promised the company would sell the weapon, saying, “After [we sell] 50k [Boring Company] hats, we will start selling The Boring Company flamethrower.” To the surprise of many, after selling 50,000 hats, Musk tweeted that the flamethrower is on its way.

Redditors from SpaceX, Boring Company and other Musk-related subreddits, noticed that the URL ‘boringcompany.com/flamethrower/‘ started to redirect to a page with a password box. One user was able to correctly guess the password “flame.” The page then brought the user to a shop page that featured a $600 flamethrower pre-order.

The page, which has since been updated, allows anyone — even Canadians — to pre-order the flamethrower for $500 USD ($617 CAD). The site is also selling a $30 ($37 CAD) Boring Company-branded fire extinguisher, just in case you were worried about burning down your home in the process of using the company’s flamethrower.

It was leaked a few days ago but they changed the password pic.twitter.com/wcMXZ0ARFk

As per its legality, it appears the firearms control legislation and policy doesn’t mention anything about flamethrowers.

The company has already sold more than 7,000 flamethrowers pre-orders since they went on sale.

Update 01/29/17: Elon Musk has posted an Instagram video where he runs at the camera with The Boring Company’s Flamethrower.

Don’t do this. Also, I want to be clear that a flamethrower is a super terrible idea. Definitely don’t buy one. Unless you like fun.

Source: The Boring Company, Via: The Verge