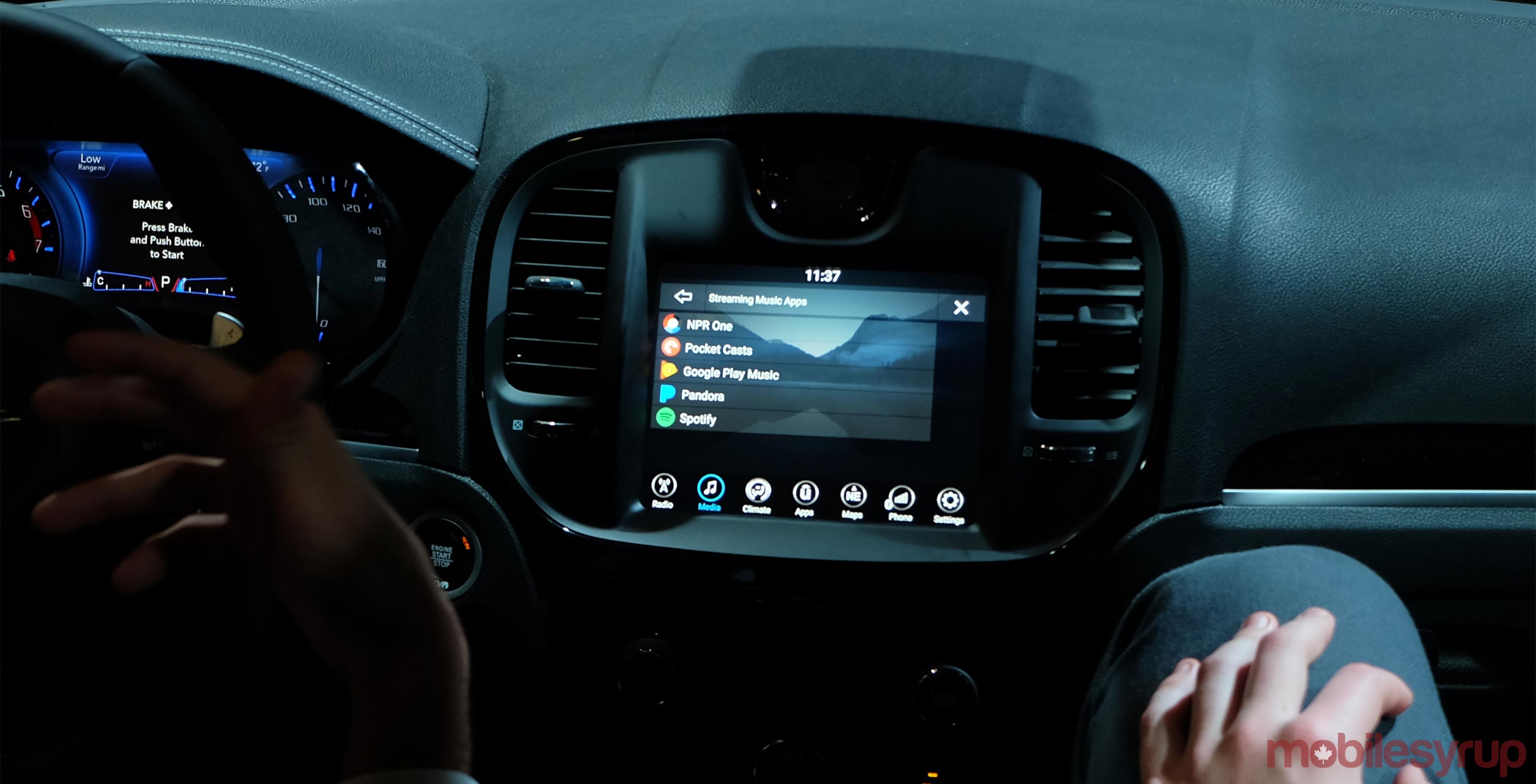 Chrysler unveiled a prototype infotainment system based on Android that is entirely different from Android Auto, looking more traditional, yet leveraging more of the operating system’s latest features.

Demoed in a 2017 Chrysler 300, it utilizes an 8.4-inch capacitive touchscreen running software that is powered by Android, though not a complete Android system. Unlike Android Auto, which is a projection platform running off a smartphone or tablet — as well as a standalone app — this is built-in to the vehicle. 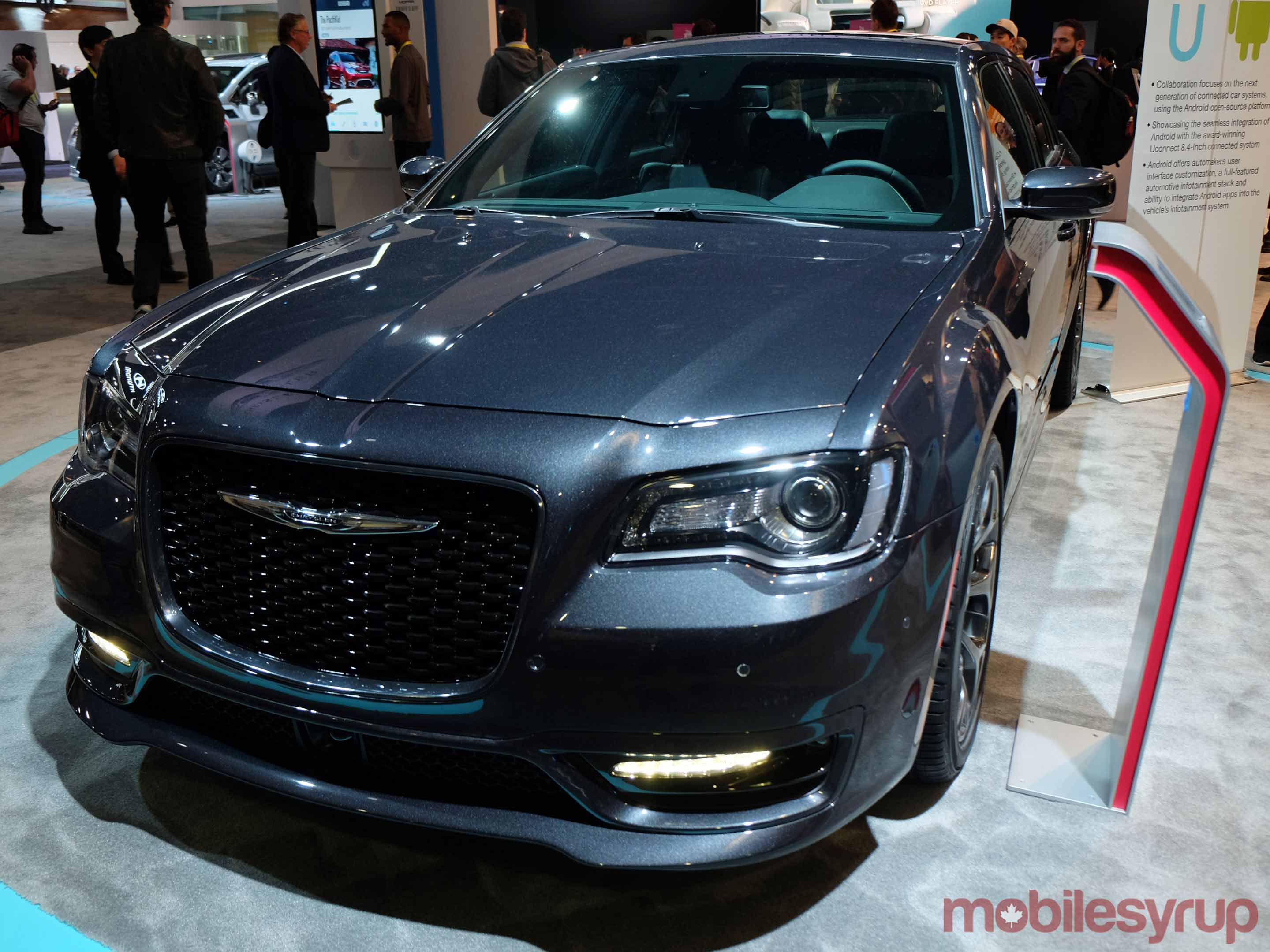 It will likely require a Google account to sign in, with two-factor authentication via a fingerprint sensor or facial recognition. Chrysler hasn’t decided which of the two it will go with, or if there’s a third option that might be better. From there, the system can apply whatever customization the driver has set on the infotainment side, be it apps, navigation destinations, favourites and even climate control.

Also unlike Android Auto, the system will work off an in-car data connection, though Chrysler can’t say who the carrier partner might be in such a scenario, nor how much data would be made available to keep it going. Google Play probably won’t be integrated because app support and integration will depend on what is approved by regulators. If I were to hazard a guess, the focus will be on apps for audio, navigation, phone calls and messaging. Google Maps was integrated in the demo, but not Waze. Regular text messaging was embedded, but not Allo or Hangouts. 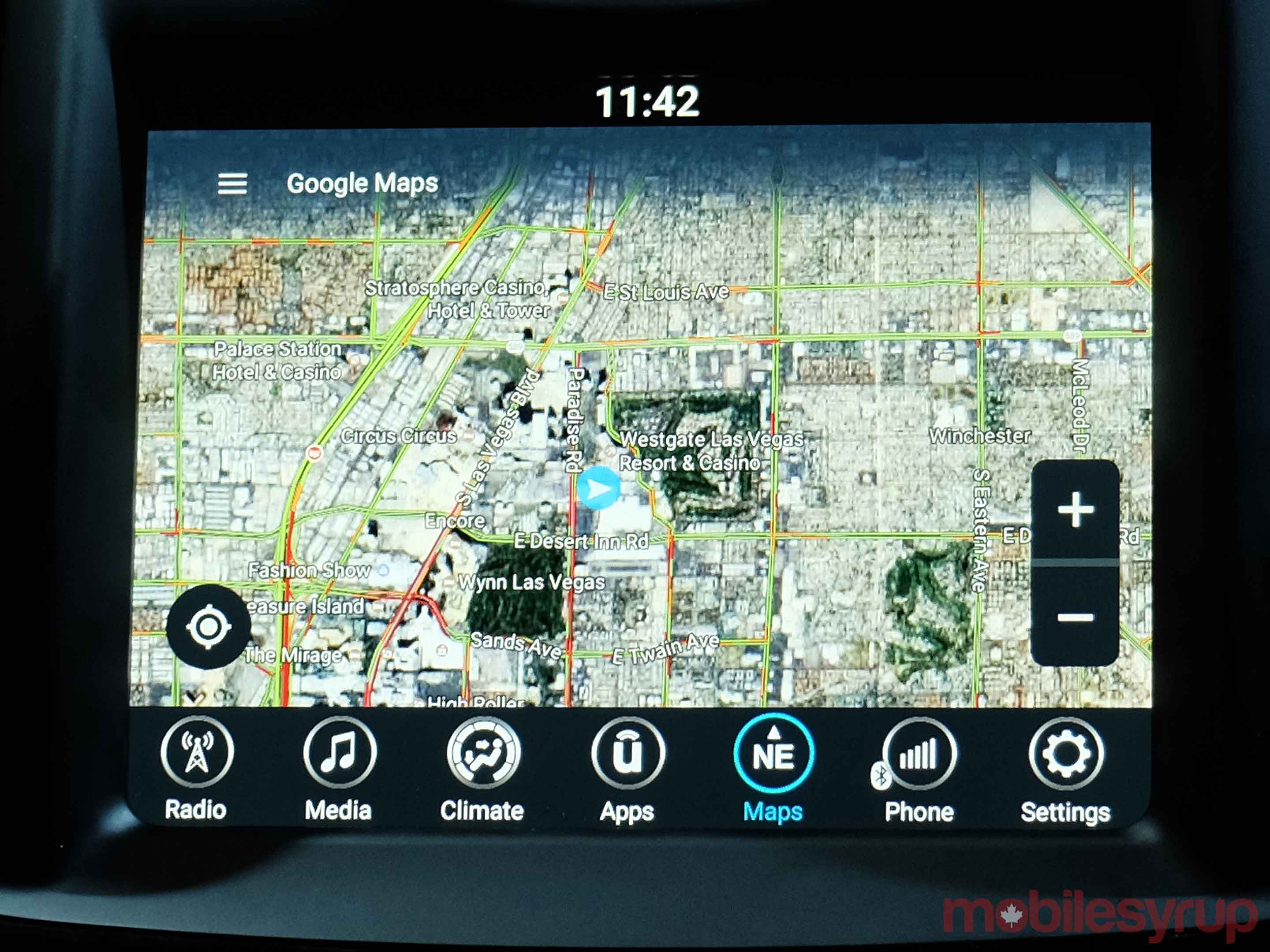 I asked about internal storage in the car for offline content. For example, storing a Google Map offline to access at any time through the car to save on data, or downloading songs via a Spotify or Google Play Music account to play tracks without having to stream them.

There is No word on whether that will be in the road map for this system, but it seems like an effective way to offset some of the data anxiety that would inevitably afflict such a setup. Google Assistant is also baked in and runs exactly like it does on the Pixel and Google Home. The demo I saw worked 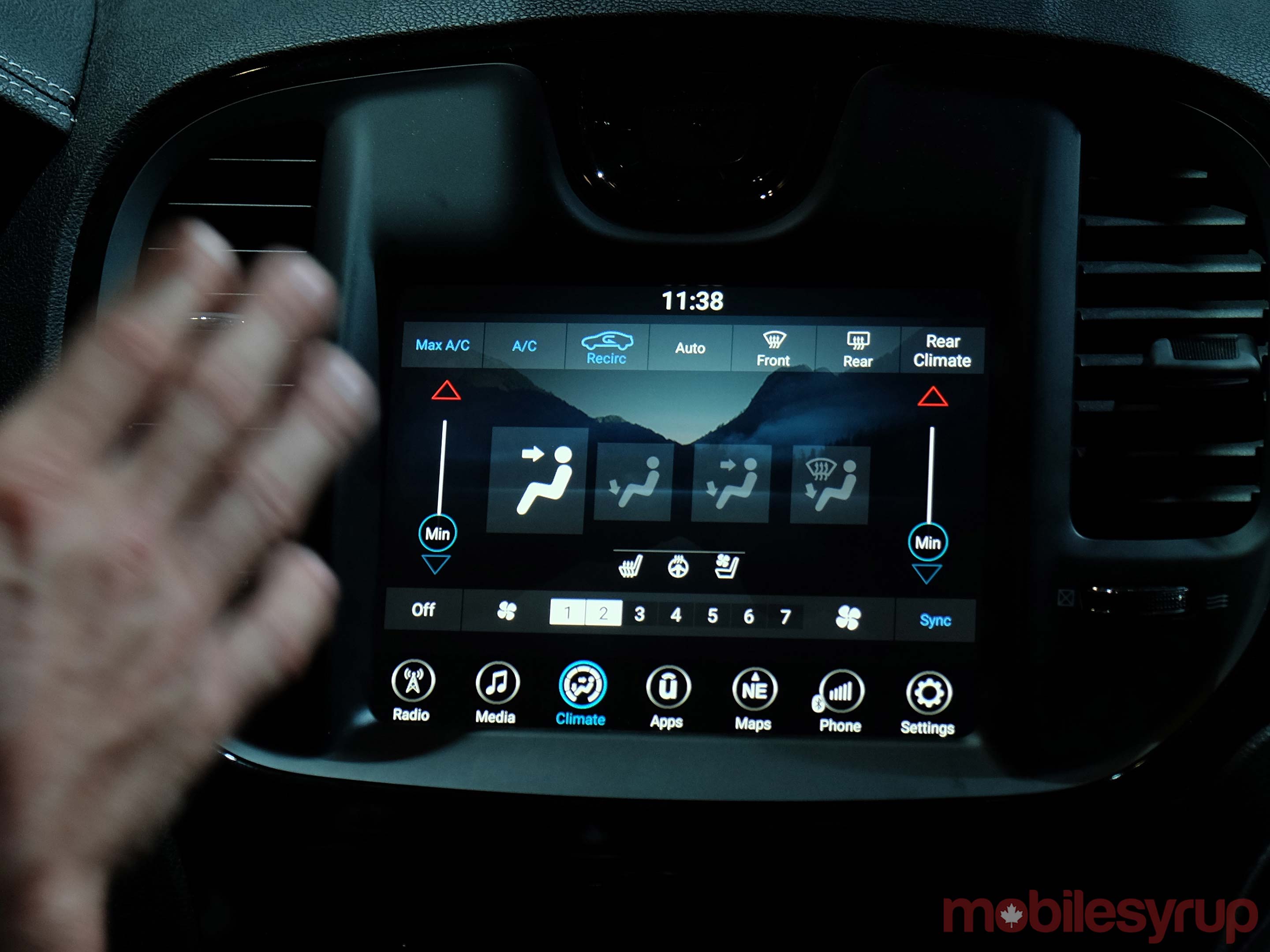 The app grid layout is entirely different than the card-based one Android Auto uses, except the bottom menu row is more in line with what Google has done already. Being a capacitive screen, users can pinch-to-zoom on a map like they normally would.
Tapping into a car’s own features is pretty neat, and the plan is to tie it all in, meaning a driver could control climate or view a backup camera directly from system, instead of having to navigate out, like Android Auto does.

How compatible an iPhone would be in such a system is unclear. Being “Android-powered” suggests Chrysler wants to keep it open enough so as not to alienate the vast market that uses iOS, but there was no integration shown, other than that Apple’s Android apps, like Apple Music, should work perfectly fine when added. 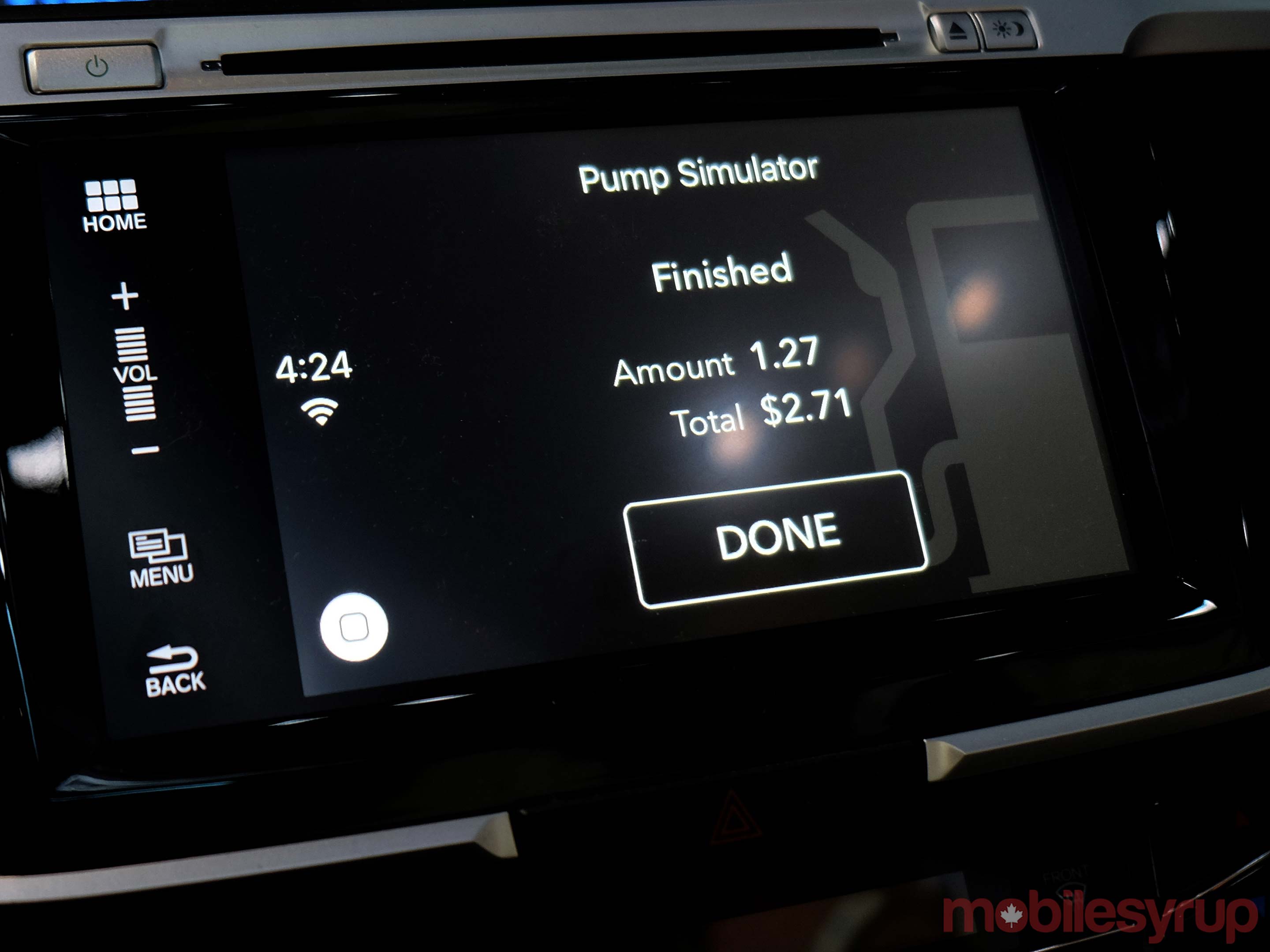 Geographical restrictions, an industry-wide problem with infotainment, are also up in the air. Would certain apps or features be available in the U.S. and not in Canada? It’s too early to say.

Then there’s the update cycle. Google would apparently be hands-on in keeping the software current, but questions over longevity would still loom. How current can it be five years after the car hits the road? Would a projection platform like Android, which can run on the latest mobile hardware, be a better way to bring that kind of connectivity into the vehicle?
Being a concept, it’s hard to say how all of this plays out, and how pursuing this approach might impact what Google has already been doing with Android Auto. The demo looked good, but the flexibility of a system that can work in almost any vehicle means this system will have to deliver something extraordinary.

Then there’s the whole question of privacy when signed in to an account that is essentially embedded in the car, including the biometrics that may be involved. It will be interesting to see where Google and Chrysler look to take this.