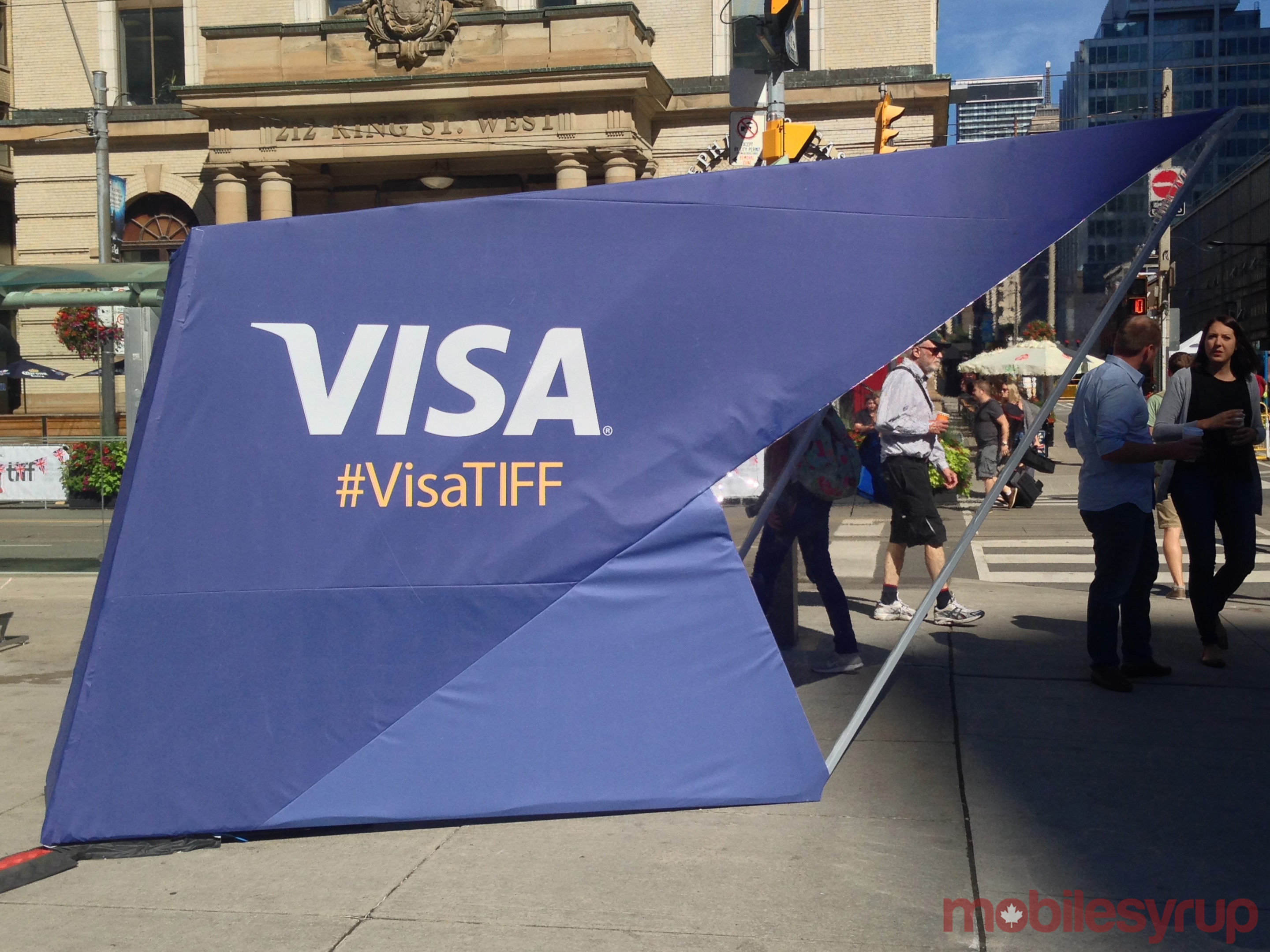 The Toronto International Film Festival is a point of pride for the whole city. However, the promotional booths surrounding the screening venues have taken on a specific theme this year.

Among the legions of eager film buffs, were the booths of several tech firms eagerly promoting their latest innovations. Just one block away from Bell’s virtual reality booths, Visa Canada is trying to give the public a sneak peek into the future of commerce.

In this day in age, there are countless ways to pay. Going beyond cash and plastic cards, payments have expanded to online platforms, smartphones and even wearable tech.The first of these payments developments, which saw the sun for the first time on Friday, is called the Visa Connected Screen. 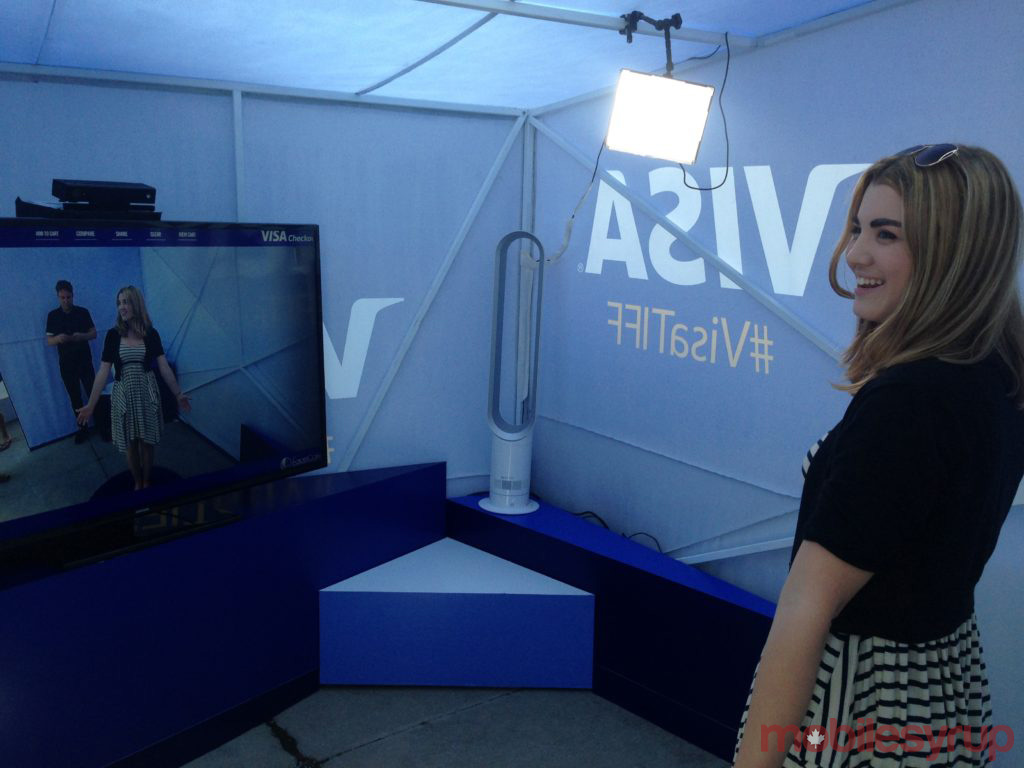 While the first screen of its kind is currently in Toronto, placed on the corner of King and Simcoe, any organization to adopt it in the future can give users the options to make digital donations to charities and institutions they care about.

“It allows me to donate where I wouldn’t have otherwise if I didn’t have change,” said Colfer, the head of digital technology at Visa Canada.

In fact, that’s exactly what Tiff patrons have the option to do as long as the screen sits there. Using any Visa payWave enabled card or phone, those who wish to make either a $2 or $5 donation to the TIFF Pocket Fund can do so without taking out their wallets or fumbling with cash. Furthermore, there are no fees associated with using the service, nor do users need to worry about security.

According to Colfer, customers need not fear. The same payWave technology used in any Visa tap card is identical to the one utilized in the Visa Connected Screen. “It’s the same protocol, use, case, construct that you’re used to with plastic. It’s just a different form factor.” 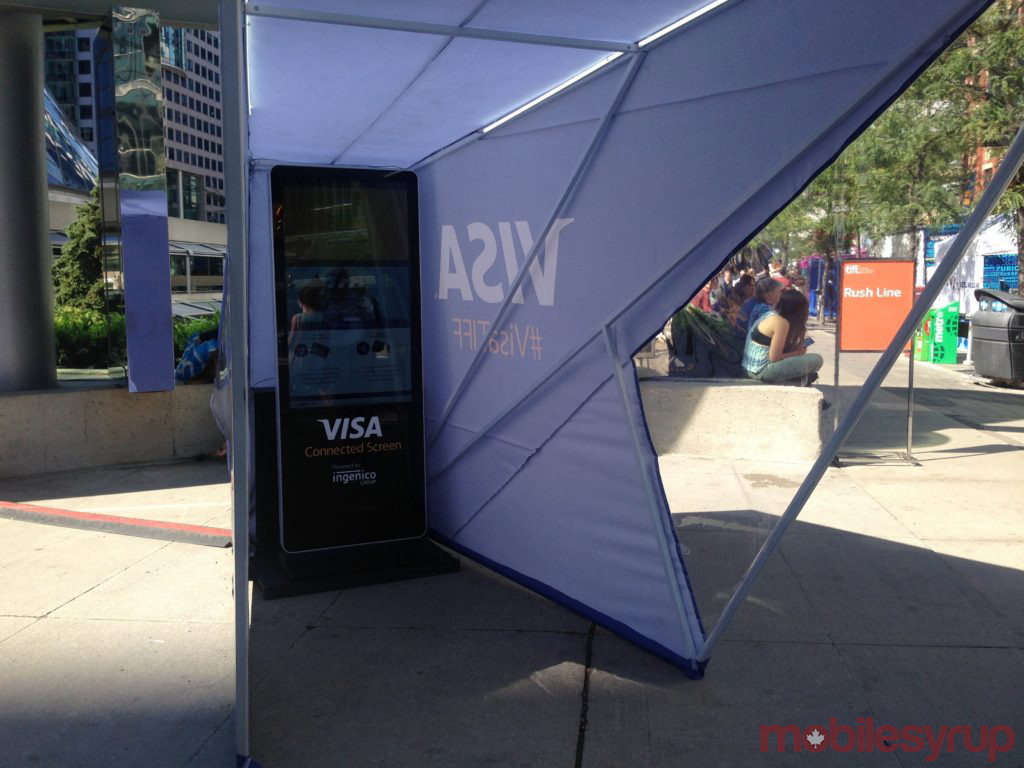 Smartphone apps are only the beginning of digital payments however. The next step, says Colfer, is completing transactions through wearable tech. In addition to demo-ing Visa Canada’s connected screen, the company also showed off their proof-of-concept Visa Payment Ring, which also operates on the payWave platform.

“This is less about mobile phones and more about the mobility of the internet,” said Colfer while explaining the viability of wearable tech as payment mechanisms.

He goes on to explain that while the mobile phone is the next avenue for payments and financial transactions, it’s not the final one. Payments can follow wherever the evolution of the internet leads them — movements which will be undeniably driven by the what the consumer prefers. 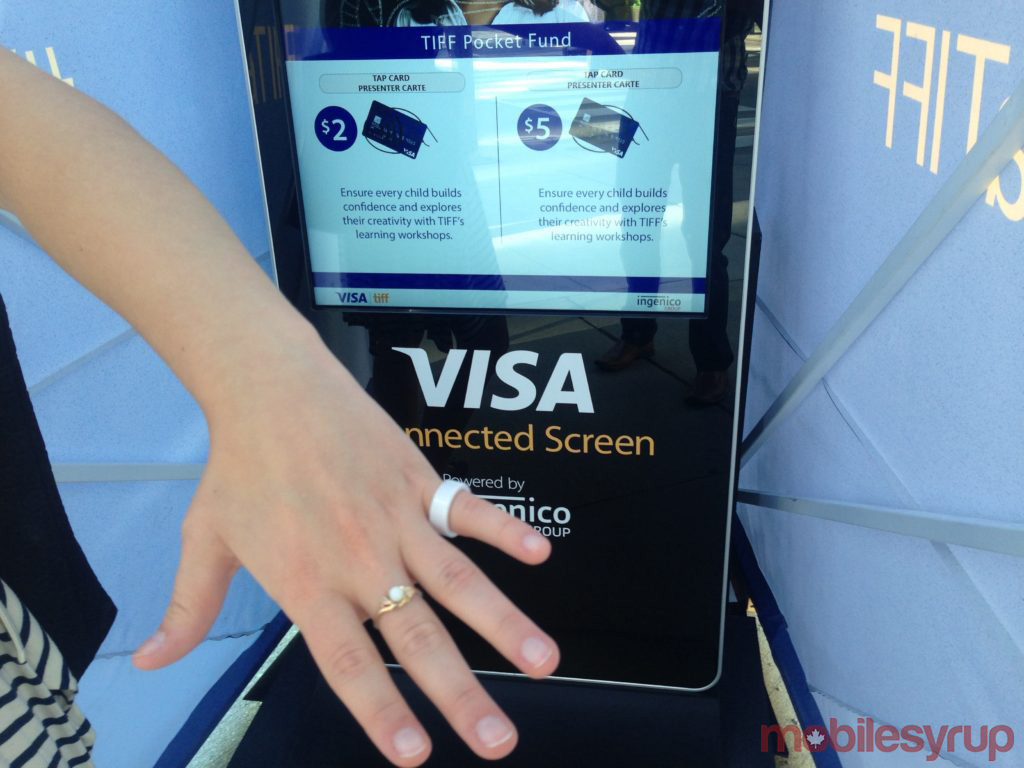 “Because we’re using these intelligent devices, the commerce experience is going to rapidly change as well,” he concludes.

Colfer demonstrated the Visa payments ring with the Connected Screen, proving that the process was much more deliberate than it may appear. In order to activate the ring, wearers (or at least I) need to close my hand into a loose fist and touch the screen with the pinky finger currently wearing the ring.

Only then was the transaction approved. Anyone worried about the security of such a device can rest assured that the safety is at least equivalent to that of tap-and-pay technology. The payments ring is not commercially available as of yet, but it’s really no different than using completing a transaction with your phone or smartwatch. Once again, there are no fees associated with using the ring. 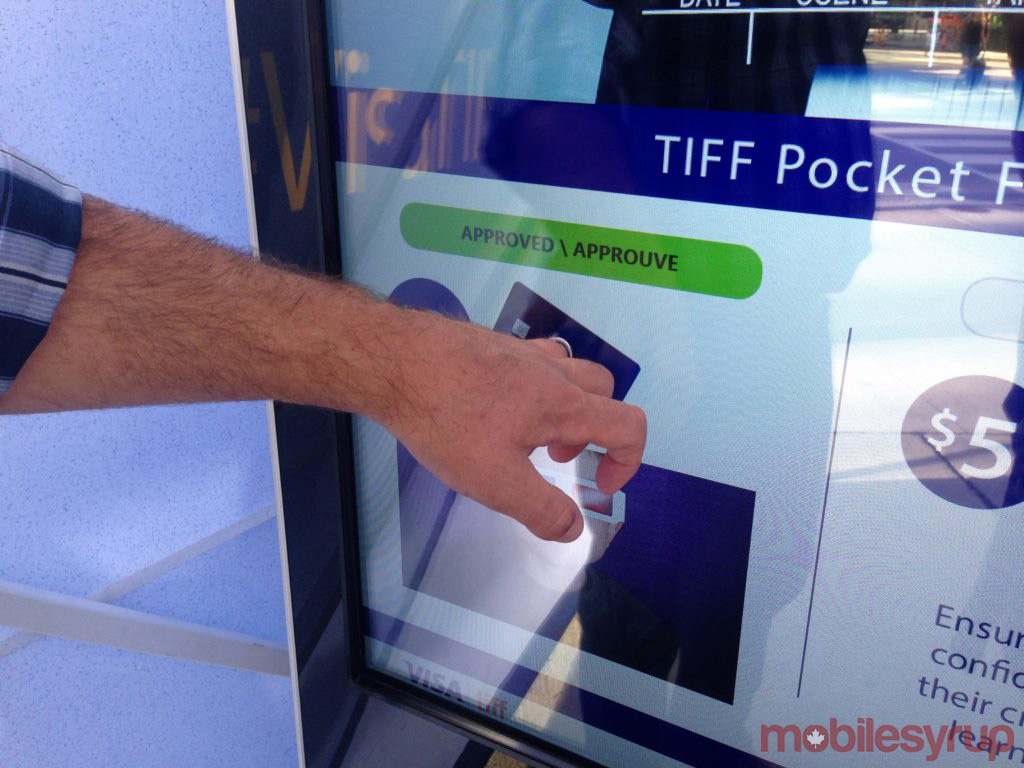 The most entertaining portion of the demonstration was no doubt the virtual wardrobe for use by Tiff passers by throughout the day. Touted as the future of e-commerce, the virtual wardrobe allowed me to try on several outfits through an augmented reality enabled program. Think, Pokemon GO for fashionistas.

The virtual wardrobe came with several options, including a cowboy, an astronaut, and the infamous Marie Antoinette. While all in good fun, this street-corner setup poses great possibilities for what lies in the near future of the retail industry. 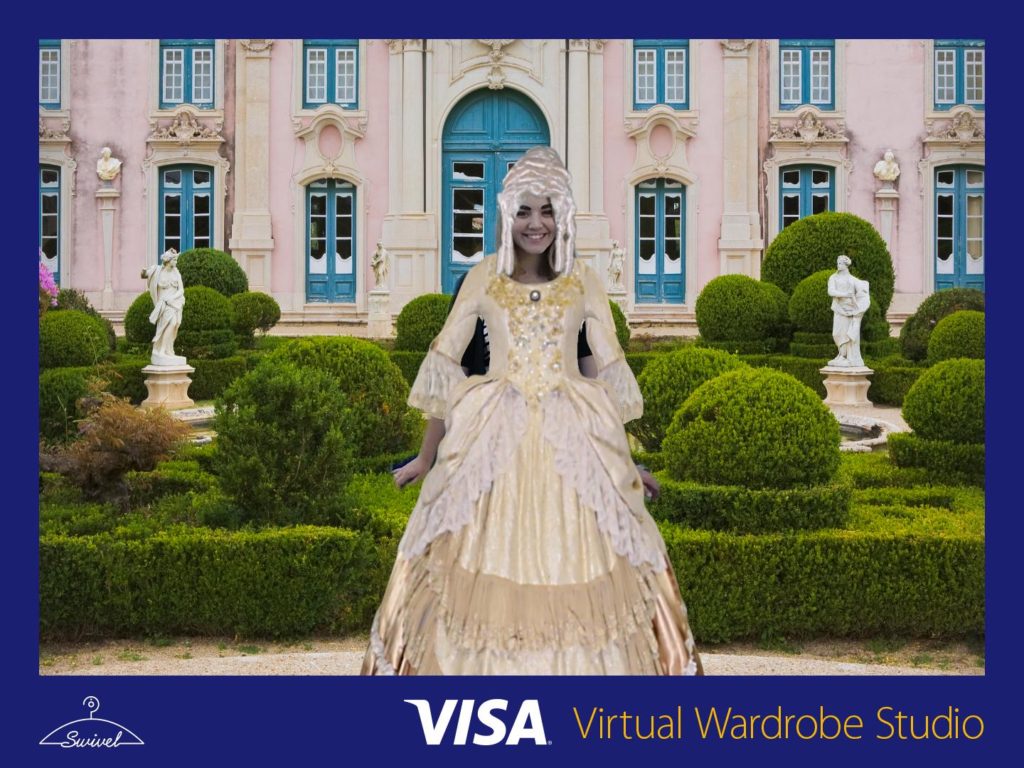 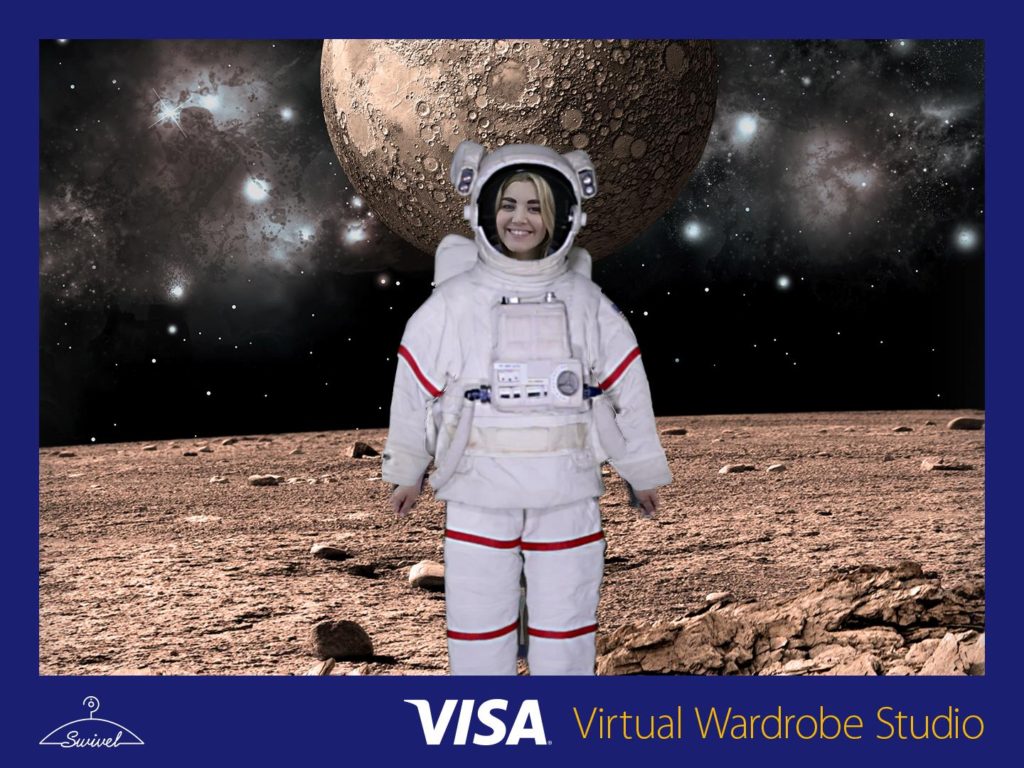 “Retail is changing lightening fast. The notion of walking into a physical location and buying a physical product is fading fast,” added Colfer.

This could potentially become invaluable is either in-store where it would replace change rooms, or at home where a web cam would need AR capabilities to transport the user to a virtual change room. While the images proved slightly grainy, it presents an intriguing opportunity. 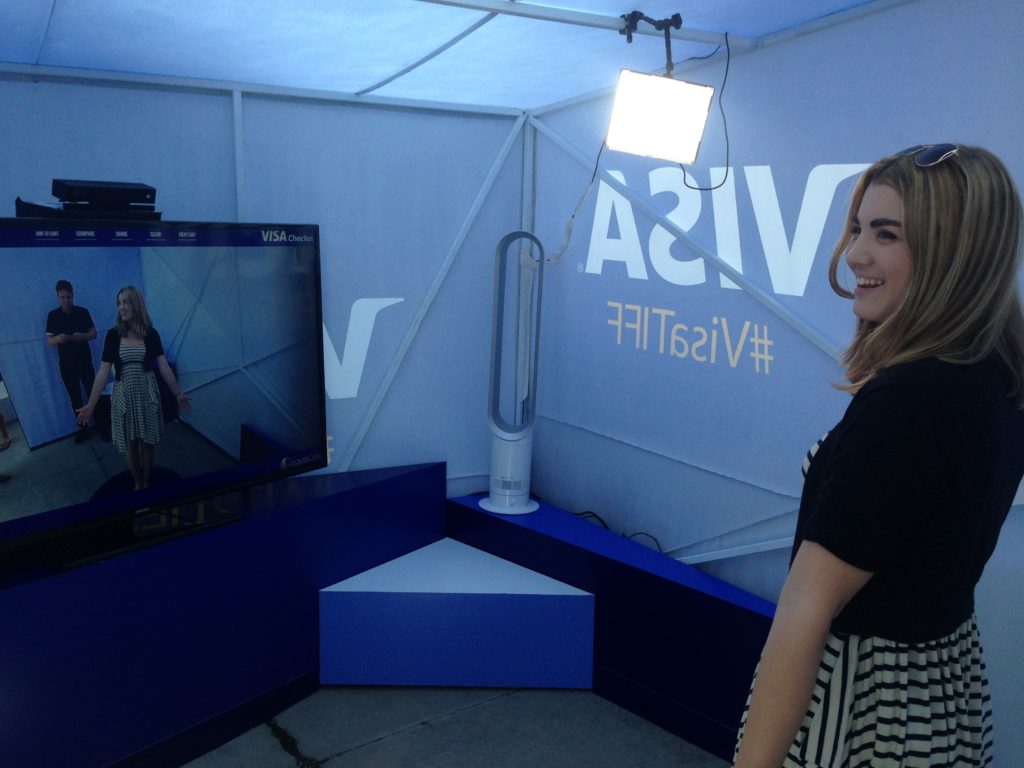 Colfer insists however that this development, like all innovation, will be driven by the consumer.

While Visa Canada’s presence at Tiff is largely intended to garner a public reaction to some of these technologies, Colfer believes that in order to succeed, payments companies need to be everywhere that the consumers are.

“Failure is just as important as success in this game.”