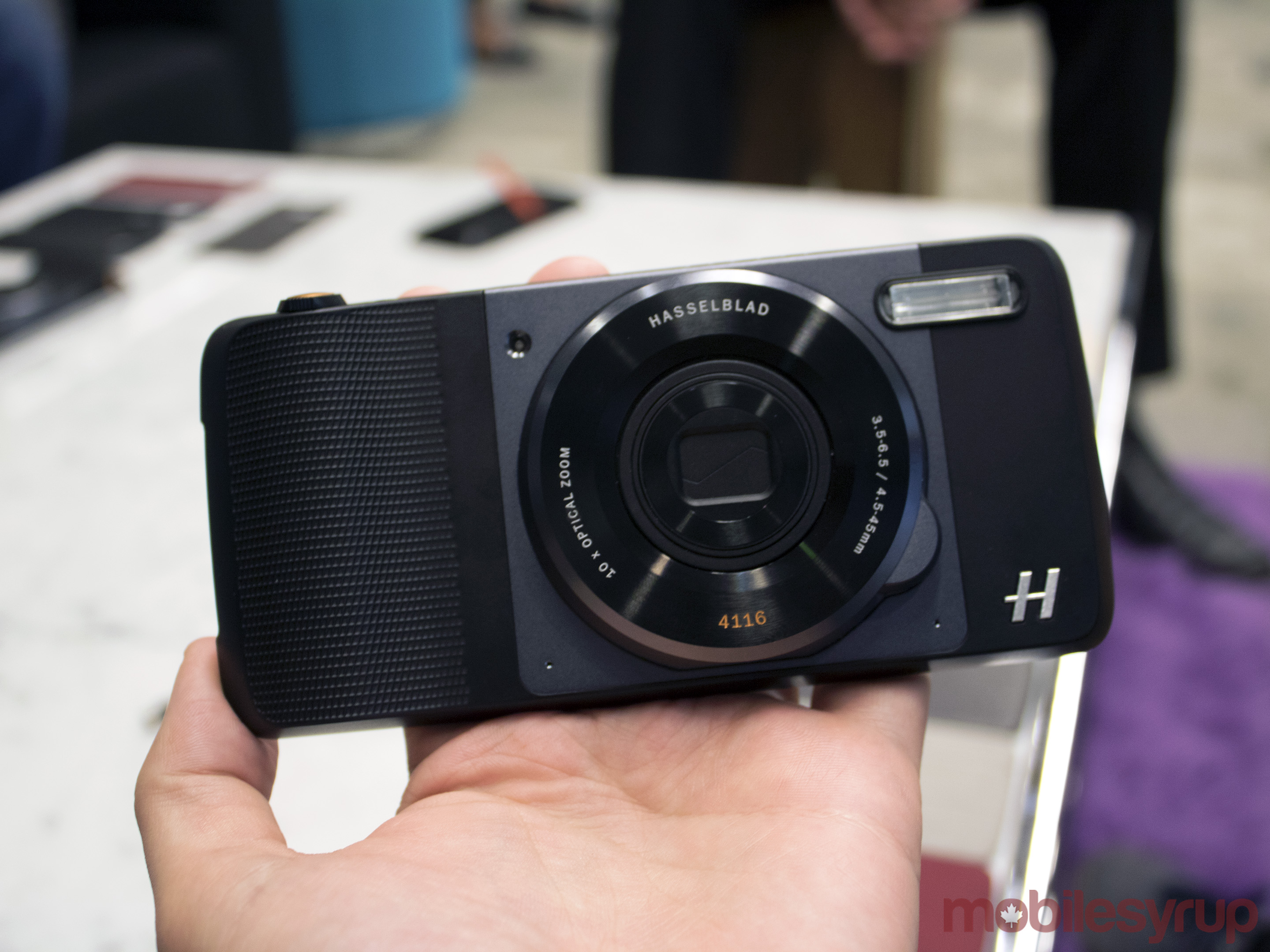 The True Zoom essentially turns the Moto Z and Moto Z Play into a mirrorless camera. The mod comes with its own 1/2.3-inch CMOS sensor with a maximum ISO of 3200 and 10x zoom lens. We didn’t have too much time with the accessory at our hands-on briefing, but what I saw was extremely promising. Build quality was solid, and low light performance was exceptional. To help with the fact that addon can shoot RAW images, it comes with a two year Google Photos subscription. 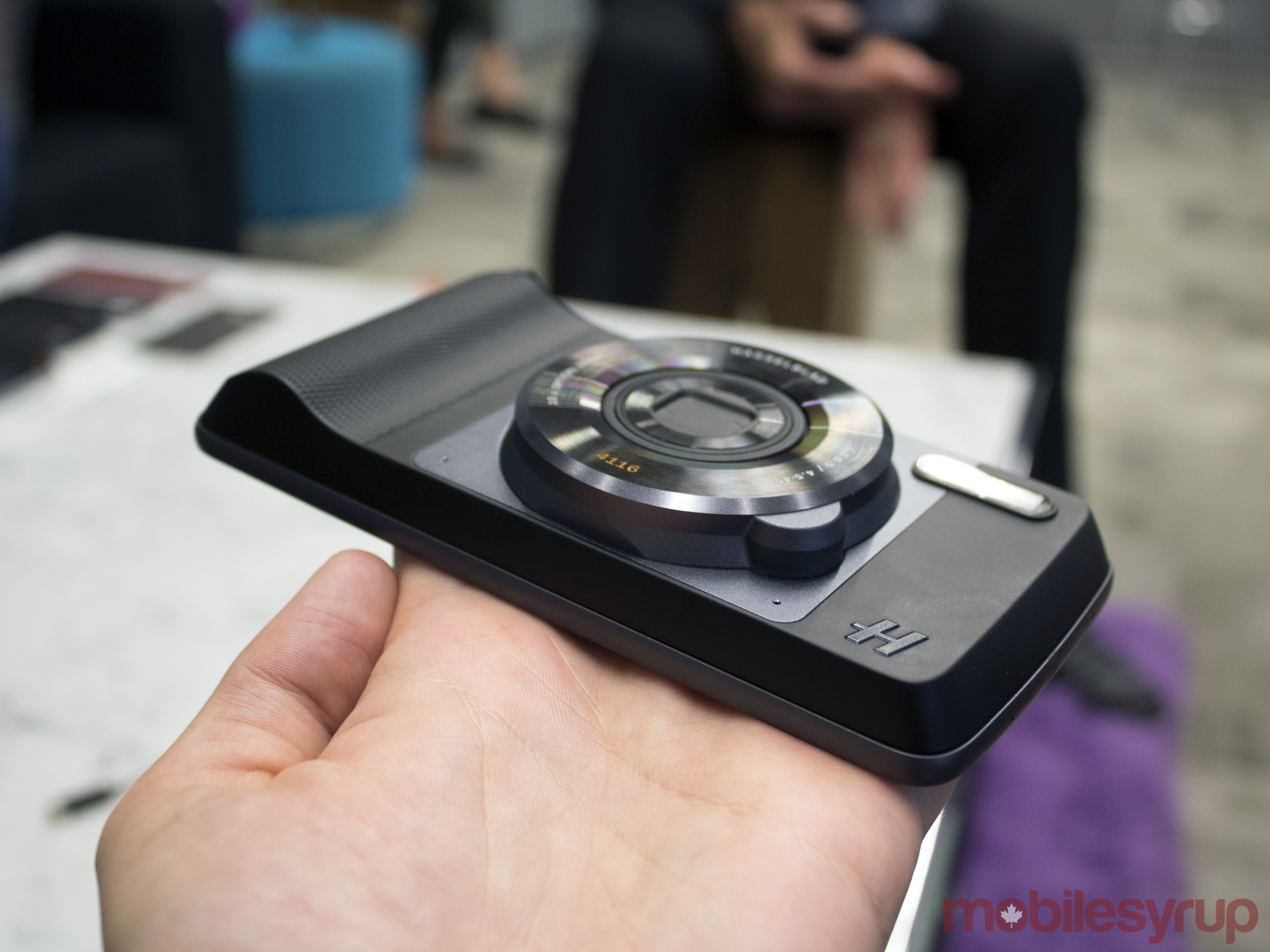 The company said it wasn’t ready to share information on Canadian pricing and availability for the True Zoom. It did, however, tell us when the other Moto Mods will come to Canada.

All the currently announced functional mods, the in-house term Motorola uses to describe the Moto Mods that add some type of functionality to the Moto Z, will launch alongside the Moto Z and Moto Z Play when they arrive in Canada. The JBL SoundBoost Mod will cost $100, while the Incipio Power Pack will retail for $90 and last but not least the Insta-Share projector is set to set Canadian consumers back a cool $400. 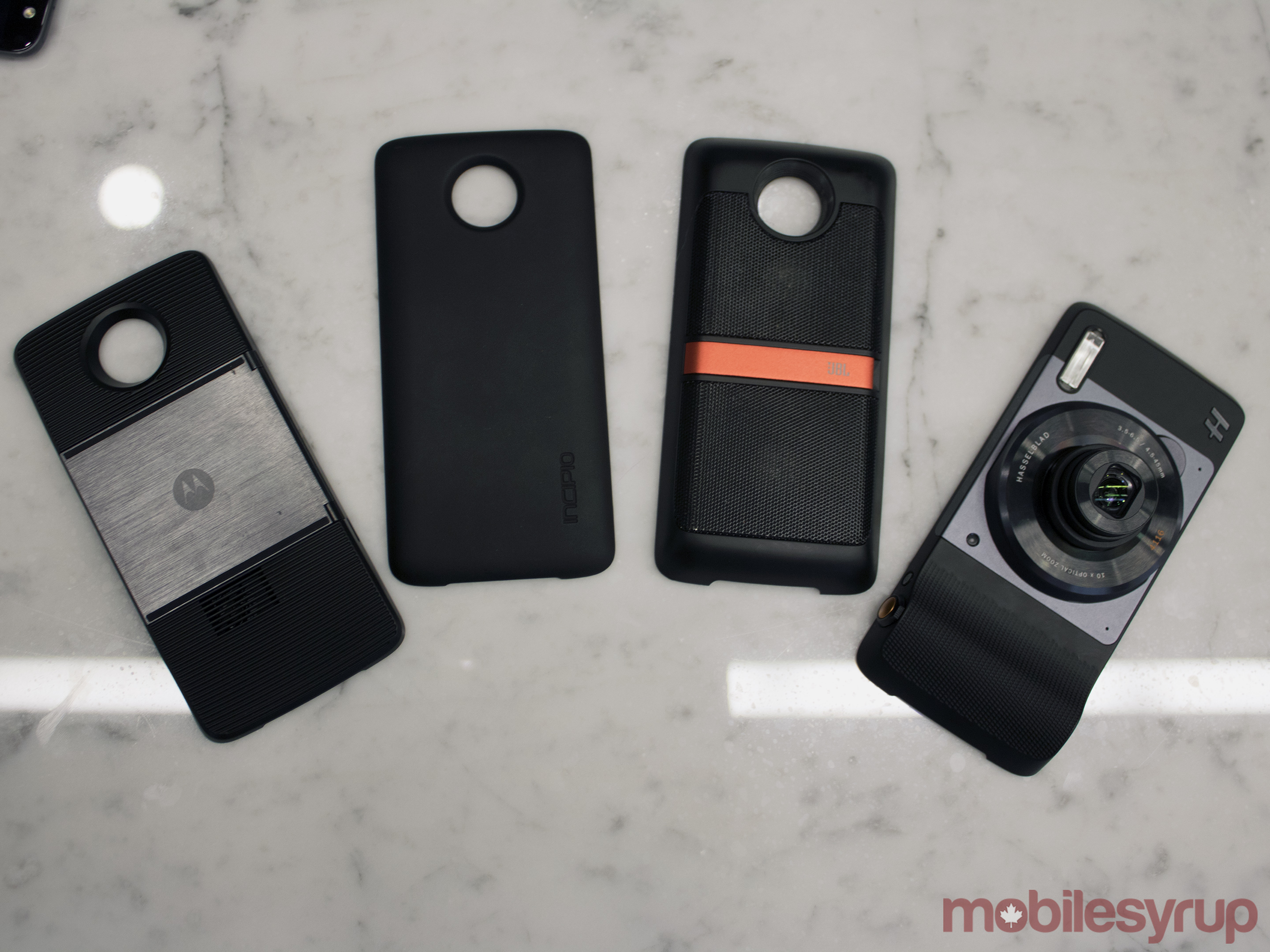 When it comes to the Style Shells, the mods that simply change the look and feel of the device, Canadians consumers won’t have as many choices as their American counterparts.

All Moto Z phones sold in Canada will come with the charcoal ash Style Shell included in the box — there’s no included Style Shell with the Moto Z Play. The three other Style Shells set to come north of the border are the crimson ballistic nylon, silver oak and black leather ones. They will retail separately for $29.99 At launch, Canadian consumers will not be able to buy the washed oak and herringbone nylon Style Shells. 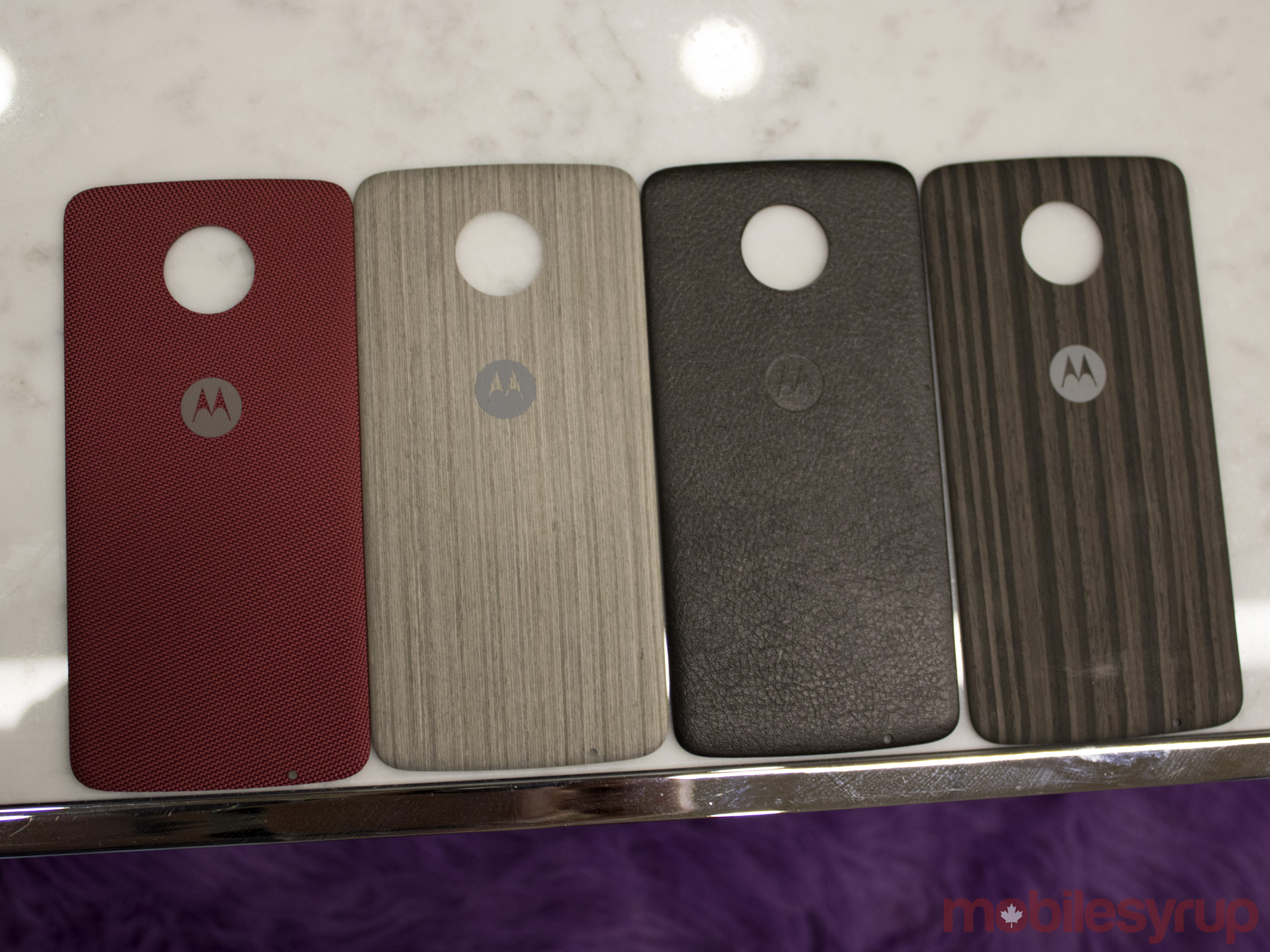 Playing around with all the Moto Mods, it became clear Motorola’s engineers put a lot of care and thought into how a modular should function. When you snap one of the functional mods to the back of the phone for the first time, the Moto Z and Moto Z Play will automatically launch a brief tutorial, explaining what the mod does.

Other neat touches abound throughout. Pull down the notifications shade when the Incipio Power Pack is attached, and you’ll see two different battery life indicators — one for the phone itself and the other for the power pack. The phone is also programmed to first draw power from the power pack and then from its own onboard battery. Similarly, it will prioritize charging its own battery first when plugged into a charger.

We’ll have more on the Moto Z and Moto Z Play, as well as all the Moto Mods, prior to their official launch in Canada. 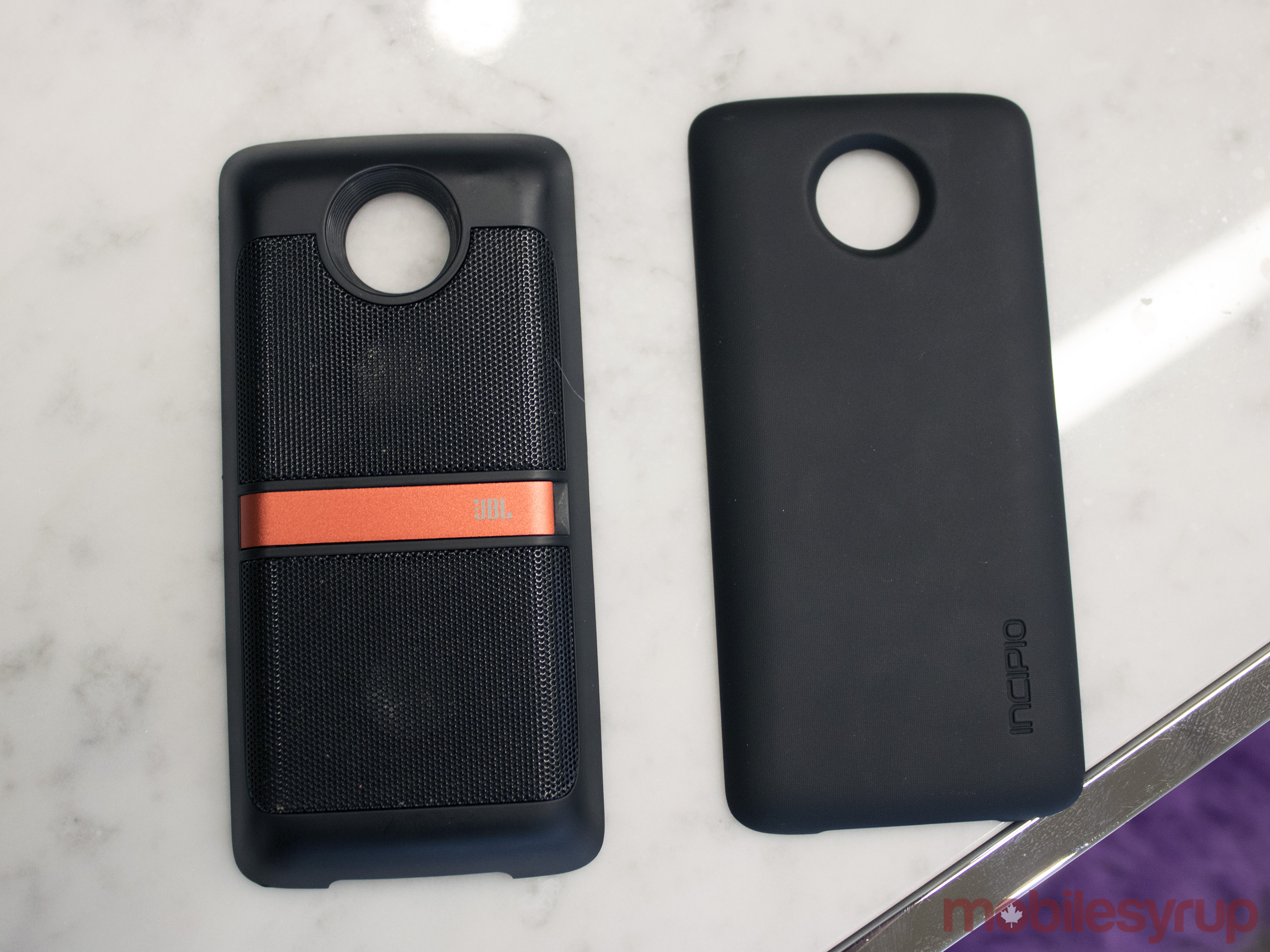 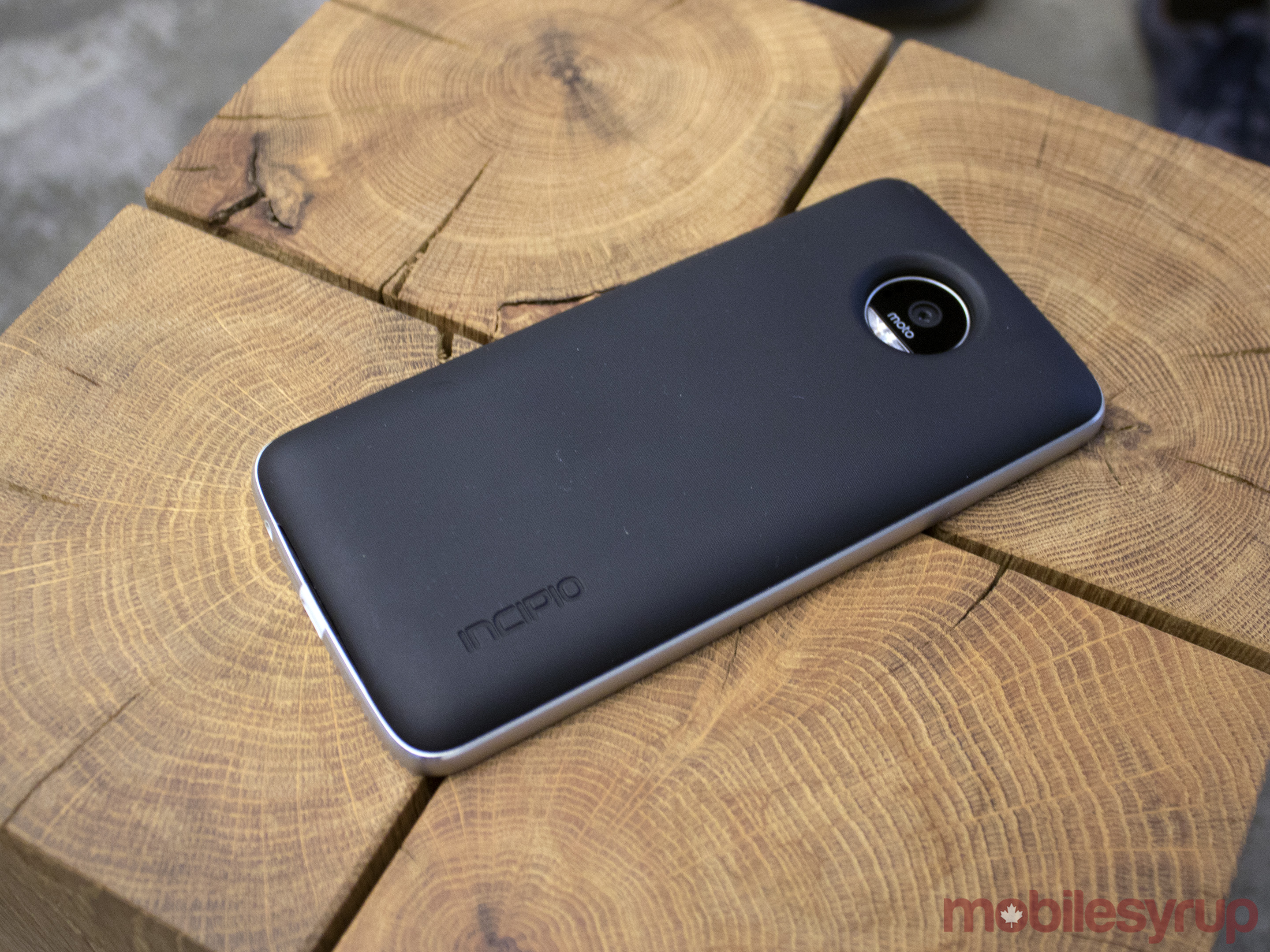