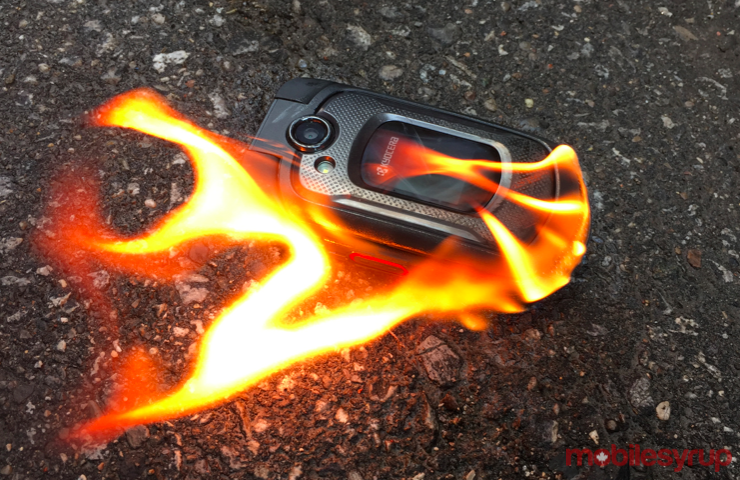 For some strange reason, the flip phone made a slight comeback this year. This type of device was most popular in the 1990’s when cell phones were just becoming the norm and smaller form factors were king.

These days, it’s large and in charge when it comes to smartphones.

However, there are some Canadians who are still attracted to the flip devices and just need a phone for basic talk and text. The rugged Kyocera DuraXE – a flip phone that screams 1990’s but packs in ample amount of durability – recently hit Canadian store shelves.

The DuraXE is available at Telus and Bell and features is an LTE-enabled PTT (Push-to-talk) device with a 1.1GHz quad-core processor and 1GB RAM. In addition, the DuraXE has a 2.6-inch 320×240 pixel display, 5 megapixel camera, 8GB internal memory and can hold up to 32GB with a microSD card, 1500mAh battery, and is certified dustproof and waterproof.

While we can report that there were no issues using the device for basic talk, text and data usage, the real tests are related to its durability claims. The company notes that it has the ability to “withstand tough environments” and is “waterproof, dustproof and even rated military standard 810G for protection against shock and vibration.”

Matt Moniz and I decided to give this a whirl and put it through a tough selection of durability tests, such as a drop test, throw test, hockey stick test, run over the DuraXE with a car test, and the best of the best, a fire test.