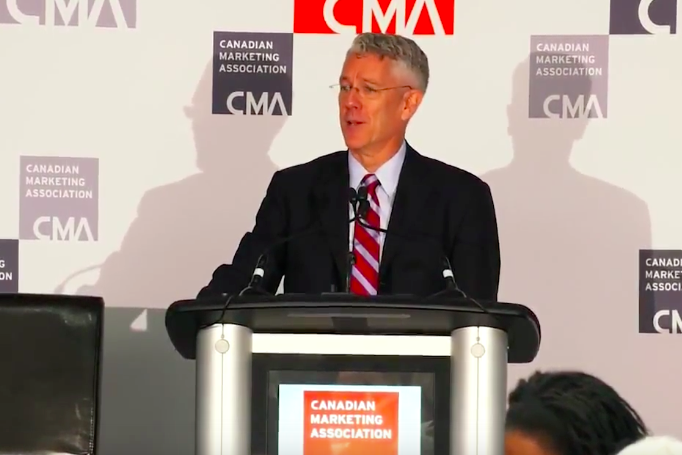 Jean-Pierre Blais, chairman of the CRTC, recently delivered a speech to the Canadian Marketing Association entitled “Protecting Canadians from Unwanted Communications.” The goal of the keynote was to give an overview of the CRTC’s role and responsibilities and how marketers can avoid breaking its rules.

Blais took his position at the CRTC in June 2012. His five-year term is set to expire on June 18, 2017. During an interview with MobileSyrup, I asked Blais about the future of telecommunications in Canada and how he sees the wireless landscape evolving.

For the curious, Blais uses a BlackBerry Q10 and has an iPad. “It’s the keyboard,” he said. “It’s what I need. I really like the keyboard. We have no choice to move to another device as it’s a Canada shared services issue.”

Q: With smartphones becoming so personal, how do you see Canadians using smartphones today and in the future?

Jean-Pierre Blais: The trends I see in the foreseeable future are that more and more of these devices people will rely on both in their public and private life, with their families and business, so I don’t see that going away. It’s just too convenient. Once you’ve had it it’s hard to go back. We’ve all experienced when we travelled in places where there isn’t as much connectivity and how frustrated we are that we can’t access the information we need. I’m not seeing that going away.

People are going to get smarter on how they use things. At first, you get mesmerised by the sexiness of certain applications and it takes time before you realize that there might be a darker side to this and that you’ve given up part of your privacy, or ‘that’s why I’m getting all those ads.’ That’s a learning curve and people will figure out to understand security more deeply. I see groups working on media awareness helping educate.

It’s a constant evolution and it’s important for an advanced economy like ours to realize how important these things are not just for entertainment. It’s also their medical applications, business, etc. There is no limit to what we can do with this technology to get us more advanced.

Q: Do you think Canada can lead the world in technology?

Jean-Pierre Blais: It’s not like a race at the Olympics. In a sense, it is because it’s a constant race and we are in an ecosystem that is constantly evolving.

Q: What about wireless competition in Canada. There are now four major players across the country. How do you think Canada is positioned?

Jean-Pierre Blais: You have to look at it on a regional basis because I think if you look at it just from a Toronto-centric perspective, because a lot of the media is here, the story is actually imperfect. I think on the regional basis there is way more competition, specifically in Ontario and Quebec. I actually think there is way more competition outside this area than people realize.

I’m not sure it’s a magic number. You can have two carriers compete and you can have four players or five players compete and match on pricing. The market share to gain is not like the early days… today you are talking about market share margins of 1 or 2 percent and how do you compete in that environment? Devices aren’t there, although there may be great breakthroughs but don’t see one on the horizon.

So it’s apps and the software part that becomes more competitive and tiny little margins. In addition, other things that carriers give to a potential customer as some sort of exclusive or sweetener that makes it appealing. In some cases that rubs against some of our rules about anti-competitive behaviour or even net neutrality.

Q: What has been your highlight since you’ve been in leadership?

Jean-Pierre Blais: I’m not even in the stage of looking back. It’s very busy and time flies. Nearly four years in June. I actually continually be impressed by how engaged Canadians want to be in subject matter. I was impressed when we had 13,000 participate in Let’s Talk TV.

In the basic telephone, we already have over 30,000 people that have participated in the online survey. That’s really quite amazing. So that always surprises me but then it doesn’t because, as I said earlier, it’s now so much part of our lives. It’s no longer the realm of Technocrats and you hear about it daily.

I try to avoid the phrase ‘ordinary Canadians’ as they are quite extraordinary.