Holograms are here: Head-on with HoloLens 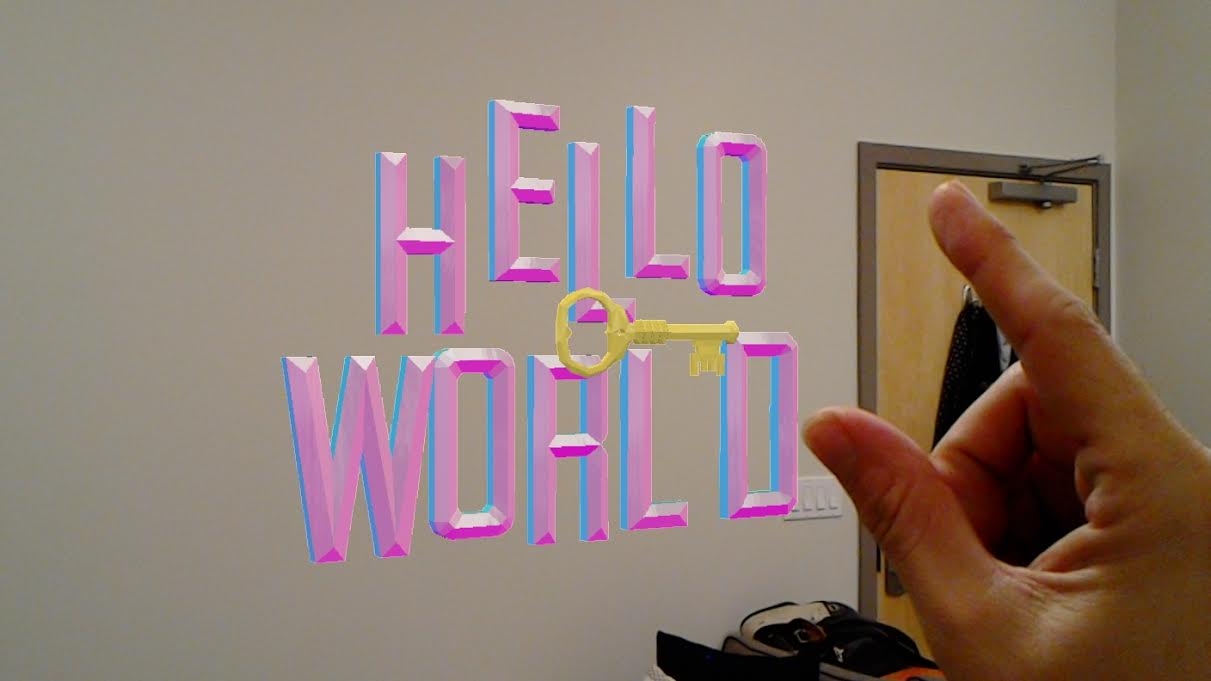 Two years ago, I lifted the lid off a box and placed a piece of the future on my face. After I powered up my Google Glass and the display lit up my right eye, my life was never the same. Not only did this box change my career, it also opened my eyes to the potential of a brand new world, one beyond computer screens, mobile devices and tablets, one where the digital world and the physical world collides. Last night I opened a new box, and what sat inside blew me away.

In this box was HoloLens, a mixed reality headset created by Microsoft which promises to “bring high-definition holograms to life in your world.” And that it does. 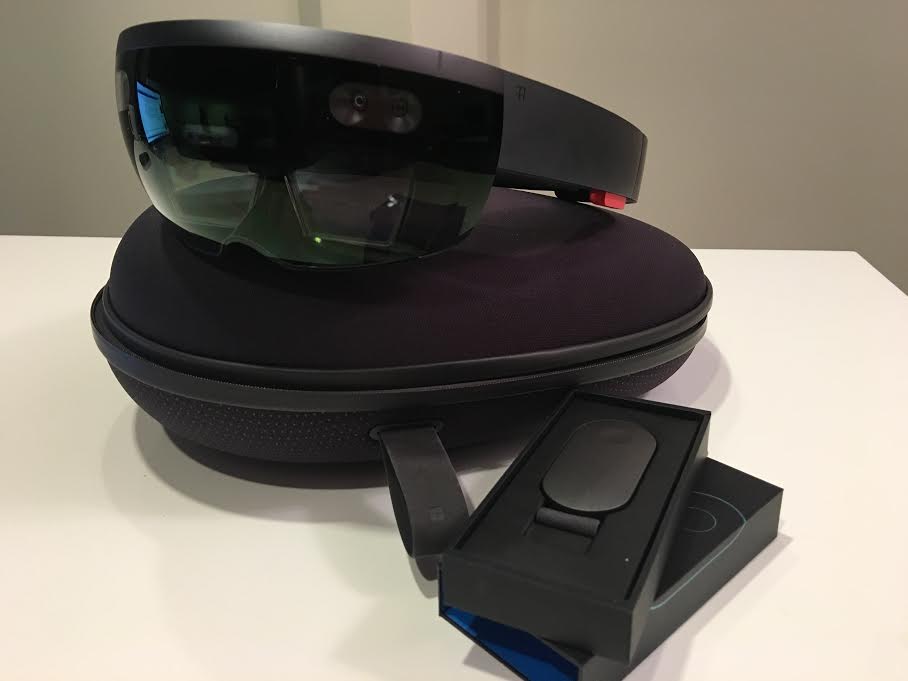 The first thing that struck me about HoloLens is how consumer-ready the device looks and feels especially considering this version is designed developers. From the box, to the carrying case and the visor itself, it is clear that Microsoft thought as much about design as they did functionality. The device feels substantial in your hands yet surprisingly light on your face. This has a lot to do with the dual headband design which reduces the weight of the device on your nose (and leaves you with a nice red ring around your forehead, not to mention some wicked helmet hair). As a glasses wearer, the overall experience of wearing the headset felt a little bit awkward, although it was made better by removing the nose piece as suggested by Microsoft.

Once on and powered up you are walked through a pretty enjoyable onboarding experience led by Microsoft’s voice assistant, Cortana. These first steps include calibrating your screen and your fingers and walking you through some of the unique user interactions.

One of the main interactions is called “Gaze” which lets you move your cursor by turning your whole head to look at something you want to select. Once the cursor is in place, to select something you have two options – voice and gesture. Voice leverages Cortana and is quite responsive. In fact, I ended up preferring to gaze at something and saying “Select” rather than the alternative which is an “Air tap”. Air tap is one of the major hand gestures used with HoloLens and is performed by taking your index finger and pinching it to your thumb and then raising it back up again. The second major hand gesture is called “Bloom” which brings up the HoloLens menu and is performed by holding your hand up with your fingertips touching and then quickly spreading them apart like a “blooming” flower. 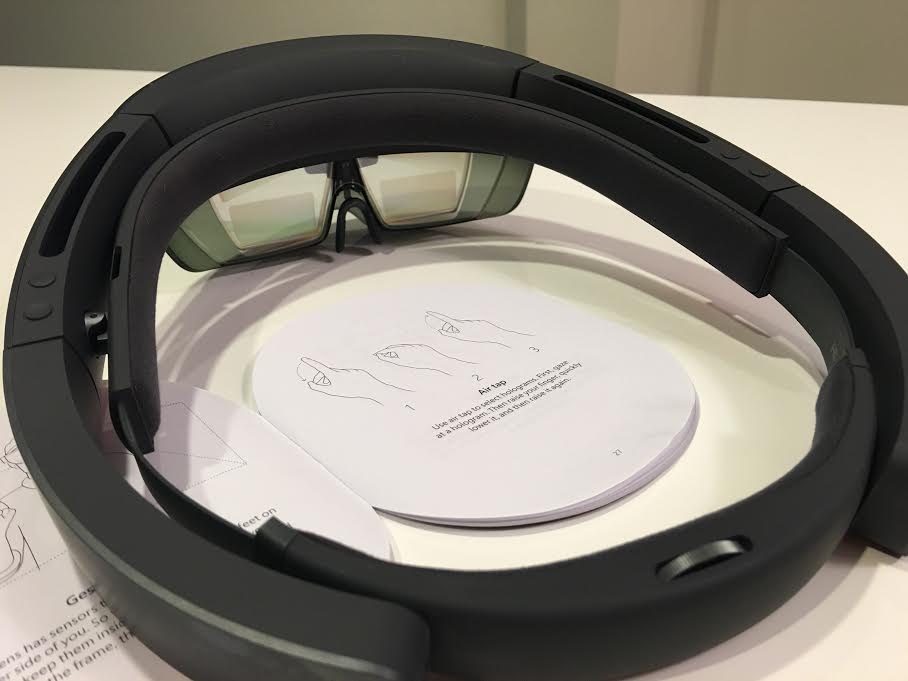 For HoloLens to recognize your hand gestures you need to be sure that you are doing them in range of its sensors or what Microsoft calls the “Gesture Frame,” which is a couple of feet on either side of you. When I first began to air tap, I found myself putting my hand way out in front of me to perform actions. But after getting the hang of it, and starting to feel the strain on my upper back and arm, I settled on raising my hand just enough so that it fit within the gesture frame which was much more comfortable. Microsoft does include a Clicker accessory in the box if you want to avoid air tapping and most hand gestures altogether.

The HoloLens display is sharp and bright and I had no problem reading and making out images. This quality does come at the mercy of a smaller field of view (FOV) which I thought was going to be a lot worse than what it really was. The smaller FOV does take the experience from seeing the entire augmented world around you to more like looking through a window. But what’s beyond that window is so powerful that it’s an ok trade off (for now).

Who’s going to clean up these holograms

I spent most of my first interactions with HoloLens placing holograms around my house. I bloomed (yes I just used this as a verb) up the menu and air tapped the Hologram app which popped open a holographic window. After placing the window in the air in my living room and tapping on the screen I was presented with a series of ready-to-go holograms both animated and still. I scrolled through the pages of space, animals, people, symbols and letters and finally decided on a tiger and a kitten which I placed on the couch next to my “real life” cat. 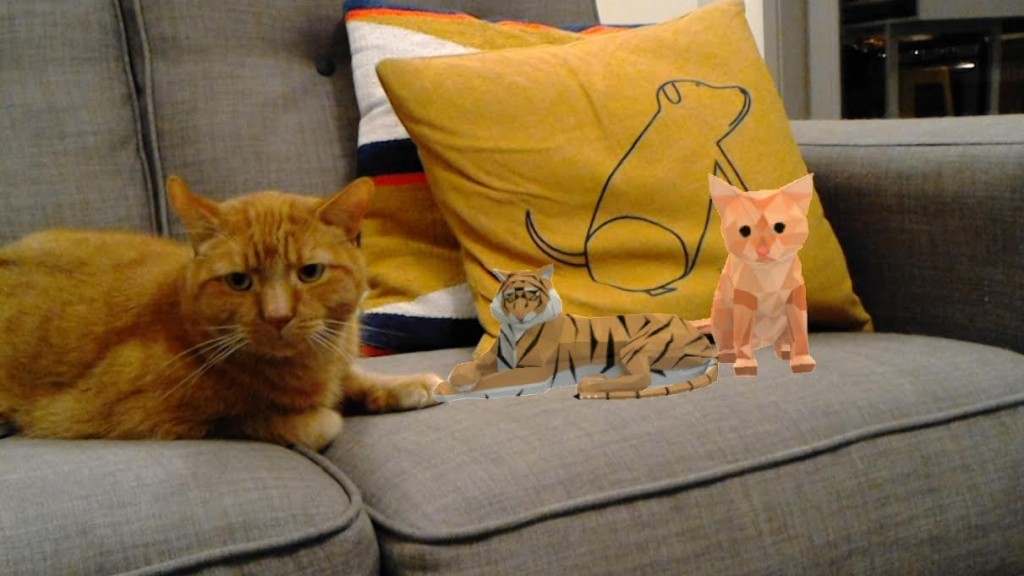 From there, I decorated my house with unicorns, birds, space shuttles and planets. HoloLens makes it extremely easy to adjust the size and rotation of each hologram. And the camera app is a fun way to take a photo or video of the mixed reality you’ve created and share it to Facebook and Twitter.

But what is truly magical is that each hologram stays in its place once you set them down – just like real life objects. This means that the octopus you put in your sink, for example, will be there when you return to get a glass of water in your kitchen. And when you go to bed and put your HoloLens on the next day, all of your holograms will be just where you left them. 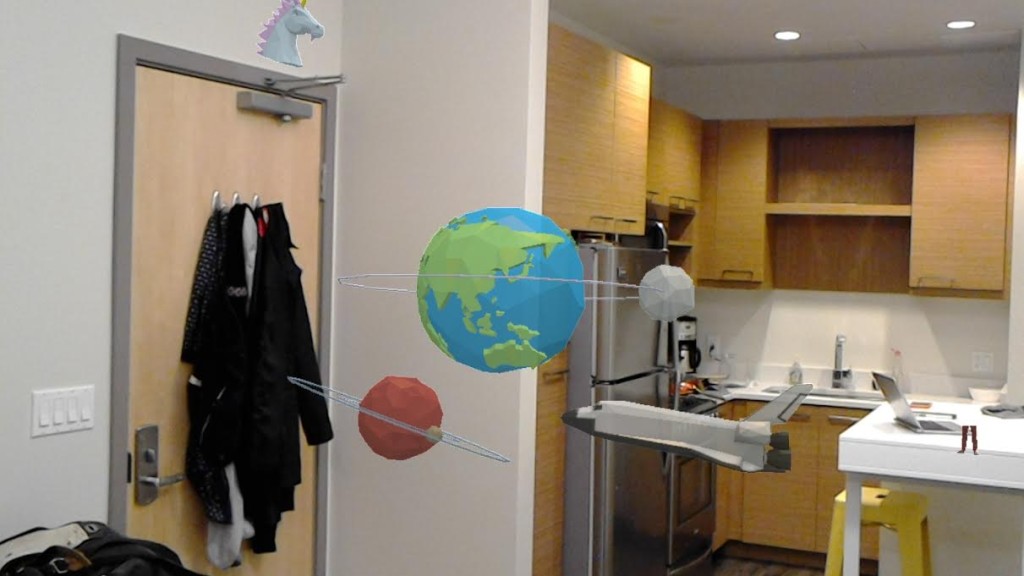 But as amazing as it was that my holograms were now a part of my augmented home, they did pose a dilemma: who was going to clean all of them up? The other part of my time with HoloLens was selecting holograms in my house I no longer wanted or needed and removing them. Doing this with hand gestures was brutal. But I stumbled upon the ability to gaze at a hologram and say “remove” which was a lot quicker and much more fun in a Harry Potter spell-like kind of way.

My overall hologram experience did cause me to dream up a near future where new jobs like hologram housekeepers, who clean up holographic trash, and holographic interior designers, who help place your holograms just right in your home, exist. Or a time when moms scold their kids for not “picking up their holograms” and panic creeps in when you realize that you didn’t back up your augmented house and your system crashes, leaving you with nothing but a bare real life home.

More than just rainbows and kittens

Although I feel a headset dedicated to creating holograms and taking pictures would kill it in the market today if it was cheap enough (*cough* Snapchat), HoloLens is much more than this. Microsoft’s app store currently features six apps specifically made for HoloLens, which show off its communication, creation and entertainment capabilities. 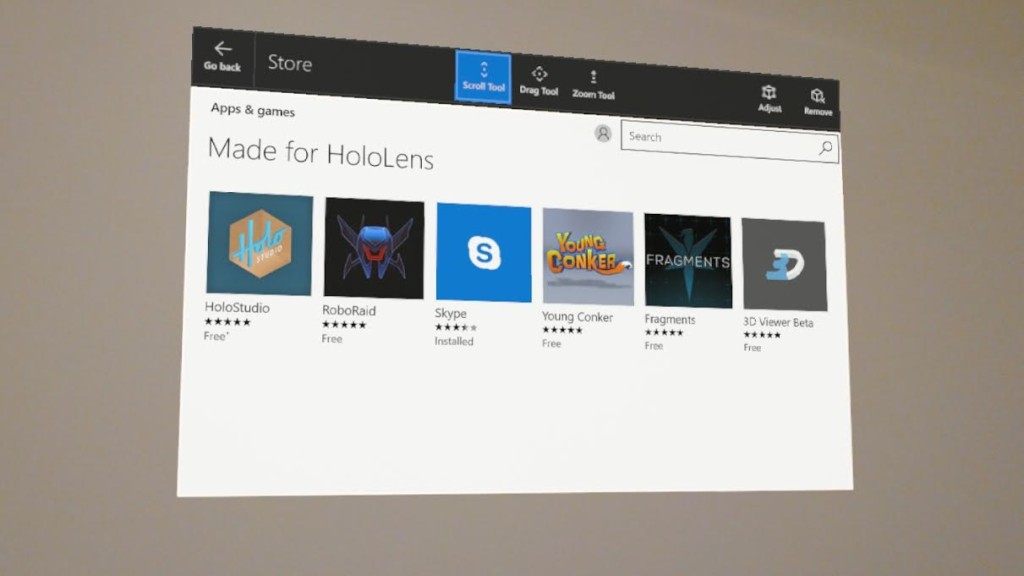 The first app in the list is HoloStudio, which lets you create 3D holograms in 3D using gestures and voice and holographic tools (very meta). The app is really easy to use and requires you to have absolutely no experience in 3D modelling to create your own holograms.

Skype is another app available for free download. I found Skype a really enjoyable experience right from the boot-up of the app when the Skype logo hovered in mid-air in front of me. The audio experience on HoloLens is also great. I liken it to hearing something in a coliseum where the sound seems amplified to make it easier to hear. The ability to bring your video caller with you as you walk around the room is a great feature of the Skype-HoloLens experience. But as the video caller can only see what you see, rather than see yourself, it makes the app more useful as a collaborative tool rather than a communicative one.

Most of the other apps available are games of which I only tried RoboRaid, which has been featured on the Microsoft stage before. This game scans the room that you are in to simulate robots breaking through your walls which you need to shoot at. Shooting is facilitated by gazing at the robots and then air tapping. Tip: remember that you are the only one seeing the robots and to the outside world you look like a crazy person madly trying to catch a bunch of flies between your fingers (case in point).

As much as blooming, air tapping and holograms demonstrate the forward thinking side of HoloLens, there are many user experiences which seem awkwardly copied over from the past.

The most obvious is the use of the window.  The majority of apps on HoloLens, including the hologram app, use a holographic window you interact with. This is essentially a pop-up screen you would typically see on your computer and it comes complete with holographic back buttons, tabs, and scroll bars. Air tapping to resize a window or gazing at the scroll bar to move up and down through options just doesn’t seem right after 3D modelling a hologram in 3D. 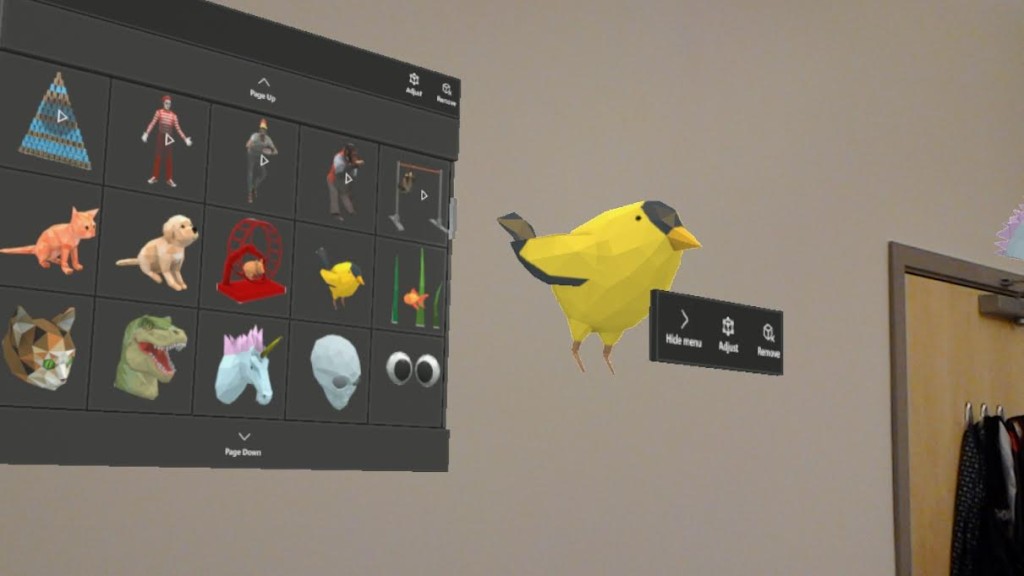 The other familiar computing friend on HoloLens is the keyboard. And let me tell you, nothing is more of a buzz kill on HoloLens than to have to enter your password on a holographic keyboard. To do this you stare at each key and then air tap or say “select” (NOTE: I didn’t end up using the clicker but assume this is a somewhat better way to do this).

I do, however, understand the value in leveraging existing digital interactions in a new platform like HoloLens. Keeping some of the experiences the same makes it much easier and quicker for users to just jump right in and use the device, as I found myself. I just hope that we don’t get lazy and keep them there.

As much fun as I had with the device, it really isn’t meant for me. This round of shipments is really aimed at the developer community. Content is 100 percent necessary for a platform like HoloLens to succeed and Microsoft gets that it is going to take time to grow, educate and nurture the ecosystem that will deliver this. Arguably, at $3000 a pop they haven’t made it entirely accessible to all developers.

That being said, I was really surprised at how well HoloLens worked right out of the box and at how many experiences were available and ready to go for the non-technical user. In this way, HoloLens reminds me more of my experience with the first version of Google Glass than it did Oculus’ DK1 in that although the target is developers there is immediate value for early adopters that can afford it. If this is Microsoft’s first stab at ushering in a holographic future, they are definitely on the right track and that bodes well for all of us.