Presto card readers will be installed at all Toronto transit stations, streetcars and buses by the end of 2016 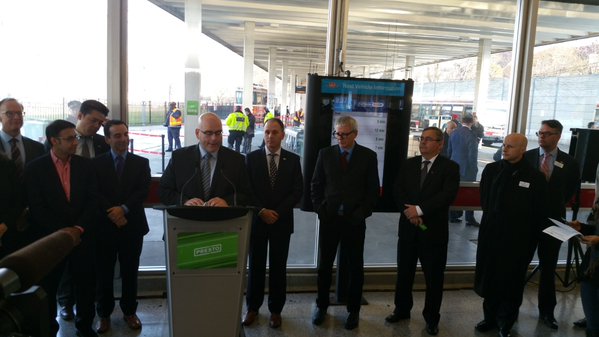 All 250 legacy Toronto Transit Commission (TTC) streetcars will be Presto-enabled by the end of 2015, Ontario Transportation Minister Steven Del Duca announced this morning at the city’s Bathurst Station.

With funding from all three levels of government, the commission now anticipates its entire system, including subway stations, streetcars and buses, will be Presto-ready by the end of 2016.

Currently, some 100 streetcars have Presto card readers, including the 11 new Bombardier-made streetcars that Torontonians greeted with delight when they began rolling out late last year. According to the provincial government, between 10 and 15 streetcars are outfitted with the necessary tech each day, though the number of card readers installed on each streetcar varies — some currently only have one reader, while others have as many as three.

Despite the promising announcement, the TTC’s transition to Presto is not expected to be easy.

At present it’s not possible to purchase a Presto card from a TTC collector. The cards are sold at GO Train stations throughout the province and on the Metrolinx’s website — the crown corporation, which oversees transportation planning in the Greater Toronto Area and Hamilton, is responsible for their sale and administration.

Moreover, with TTC buses not expected to have the requisite equipment until the end of next year, those transferring to a bus from a streetcar or subway station will need to get a transfer.

Lastly, the TTC hopes to phase monthly and weekly Metropasses out by the end of 2016. In addition, it is considering phasing out the discounts it offers to seniors and high school students. It is also strongly considering the institution of on- and off-peak fare pricing.

On the bright side, all this means that sometime in the future — hopefully the not too distant one — Toronto transit riders will be able to use their smartphones to pay for their subway fare.

The technology is certainly there: earlier in the month, Suretap successfully tested out a system to allow riders on the Montreal transit system to pay for a fare with their smartphone. The TTC also announced recently that it plans to allow people to pay for their fare with Apple Pay by the end of 2017.