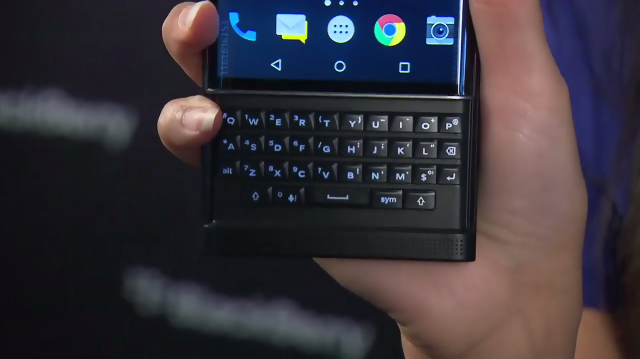 At the Code Mobile conference in California today, guest speaker John Chen, BlackBerry’s president and CEO, told the crowd that the company would be out of the handset business in a year if it can’t make a profit from it. He said that the company needs to sell approximately five million devices per year to turn a profit.

The company, which sold 800,000 handsets last quarter, has been teasing its exit from the smartphone business for some time, with Chen himself admitting that it is a very difficult market in which to thrive, but until now hadn’t given any timelines.

A lot rests on the success of the Android-powered Priv, which is expected to be released sometime in November. The phone, which Chen haphazardly revealed during its recent earnings call, runs what appears to be a pure version of Android 5.1.1 Lollipop with some of BlackBerry’s own security enhancements. It also has a keyboard that sits underneath the screen, accessed by sliding up the front of the unit.

The Priv is BlackBerry’s big gamble, with the company hoping that it can find the success in both the consumer and enterprise markets that has eluded it since the release of BlackBerry 10 in early 2013.

Chen told the crowd that his company still sells BlackBerry devices because “there’s value added and a market that is underserved.” It’s unclear whether the company will release new BlackBerry 10-powered devices in the coming months, or if it will let the Priv sit on its own.

Chen believes that BlackBerry’s future is firmly tied to the sale of software and services, but that his company’s phones represent the ideal combination of hardware and software.

“BlackBerry is a new company. We have new life,” said Chen recently. The Priv certainly looks like a nice product, but we’ll know in a year if the gambit worked.

Finally, Chen gave a hint on the Priv pricing, noting it will have a “high-end price,” but “we’ll make the phone financially affordable to get, whether that’s by installments or something else.”