We spend a lot of time of looking at our smartphone displays. So much so that I sometimes curse the fact that companies like Samsung and Sharp have proven to be so adept at constantly supplying smartphone manufacturers with increasingly better displays to put into their devices. After all, how can I be blamed if my eyes feel strained all the time when these companies keep making displays that are so nice to look at?

Joking aside, it’s certainly true that the ubiquity of computer, television and smartphone screens haven’t done many favours for our eyes; there are whole segments of the population that suffer from insomnia due to the computer use, for instance. However, it’s also true that display technologies, whether they come in the form of LEDs, OLEDs or something else, are just that: technologies. How they affect human health depends on how we humans decide to use them.

Take the AMOLED technology that Samsung has used to great effect with its Galaxy line. A Canadian company called OTI Lumionics is using the same technology at the base of S6’s organic light emitting diode displays and turning it into a futuristic light source that has the potential to turn the lighting industry on its head.

The company recently released the Aerelight A1 lamp, its first consumer and a showcase for the OLED lighting technology it is developing. On that latter front, the Aerelight does a fantastic job, but it is a great product? Read on to find out.

Besides the futuristic light source, the Aerelight features a seamless aluminum design that is touch-sensitive throughout its frame, and a base that is able to wirelessly charge a smartphone via Qi and PMA standards.

As someone who loves the tactility of physical buttons, I found the design of the Aerelight to be a mixed bag. Certainly, its sleek design would not have been as seamless with a set of switches, but I found its touch interface poorer than expected. There were many times where I accidentally turned my review unit off by brushing my hand against it while trying to reach for something else on my desk.

In part, this happened because turning the Aerelight on and off and adjusting the brightness of its panel is done with the same single interaction: you turn the unit on and cycle to your preferred brightness by repeatedly tapping its metal frame. This means that if you’re on the A1’s maximum brightness and you accidentally touch it, you’re left without light and forced to tap it four more times to get back where you were. It’s a design that favours form over function in the worst way possible. 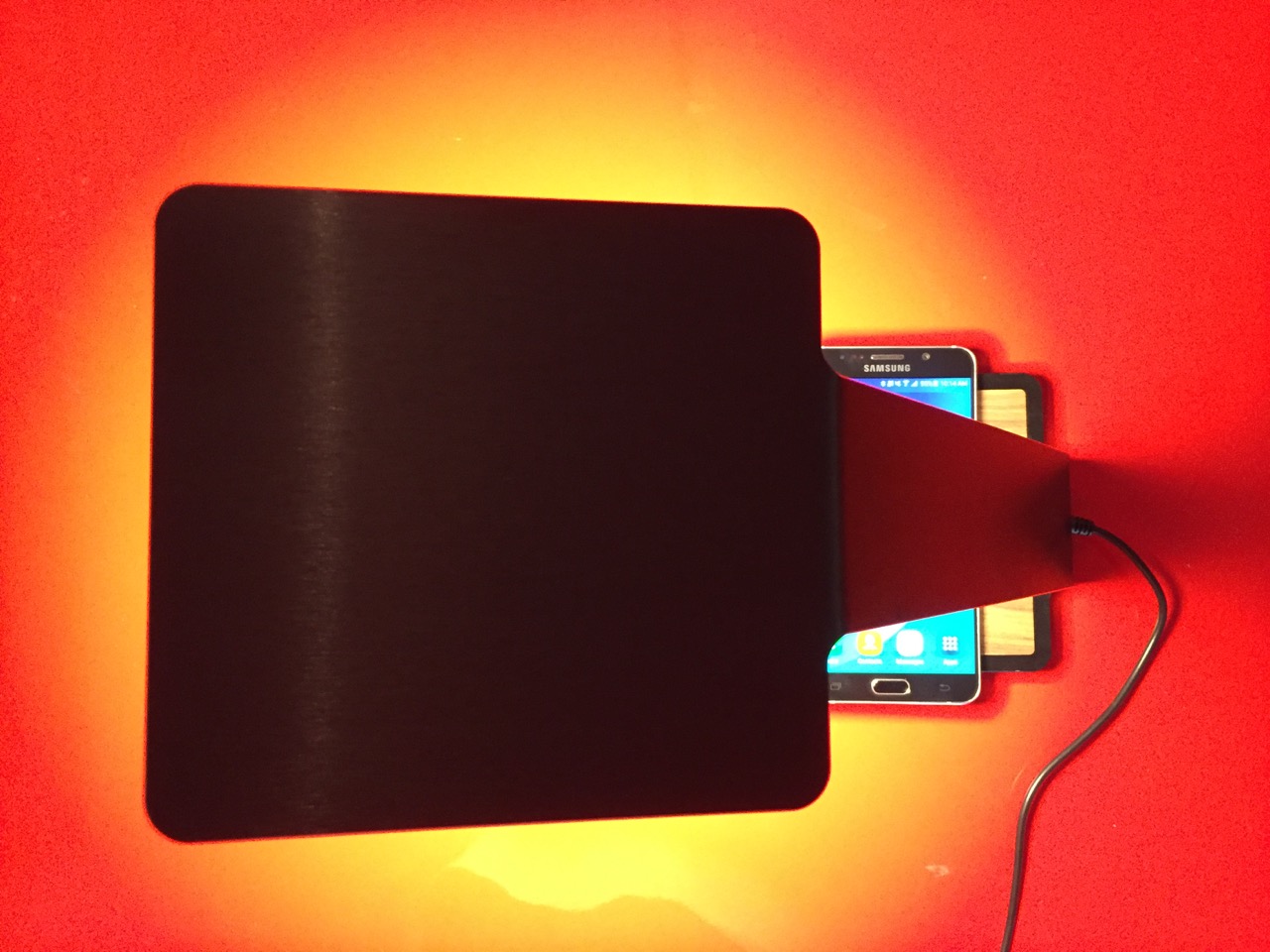 I also found the frame registered my taps less than 100 percent of the time. According to Albert Lam, the product manager OTI Lumionics assigned to oversee the launch of the Aerelight, the company put a lot of time and effort in to the software that manages the lamp’s touch mechanic so that it wouldn’t, for instance, register rogue swiping from the paw of a curious cat. While I’m happy to report that the Aerelight was mostly immune to the machinations of my particular feline overlord, it seems the company still has some work to do when it comes to software. As I mentioned earlier, there were times where I had to tap the Aerelight multiple times to get it to register that I wanted more light. Neither of these issues were enough to ruin my experience with the lamp, but they’re something I hope the company addresses with future models.

What does work well is the Aerelight’s capability to charge a smartphone wirelessly. Place a smartphone that supports the aforementioned Qi and PMA standards on the Aerelight’s wooden base and it’s well on its way to being topped up. With the Aerelight most likely set to live on someone’s office desk or beside table, it’s a thoughtful inclusion that makes a lot sense for this type of product. 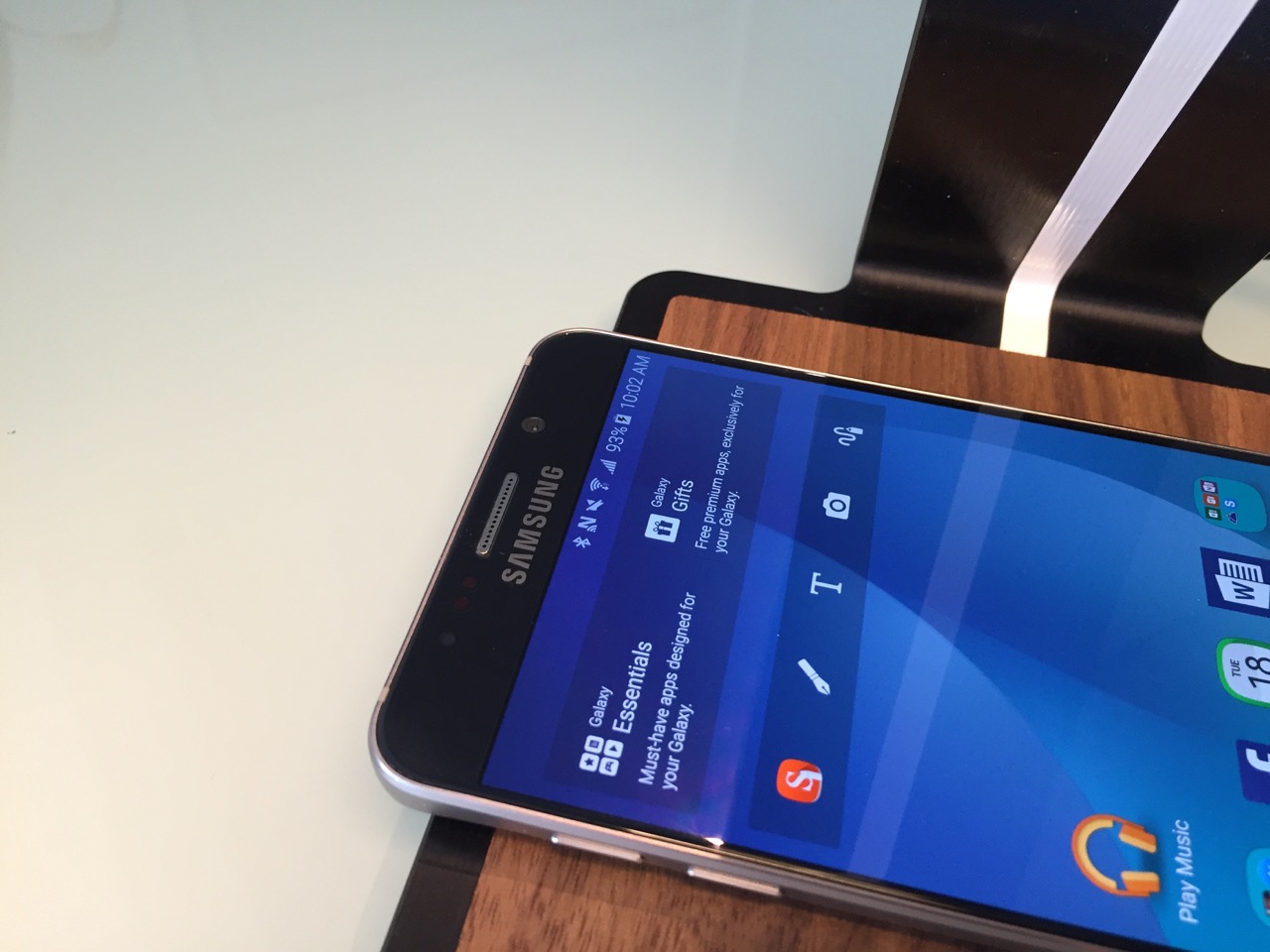 That said, if you’re buying this lamp, you’re doing so it because of the OLED panel that’s affixed to its metal frame. On that front, the A1 is one of the best lamps I’ve had on my desk. It gently diffuses a warm yellow light that is easy on the eyes (without any hint of a harsh blue light) and one that makes working late in to the night or reading a book before bed an absolute pleasure. Moreover, because the source of the light is a panel, the light it gives off is more evenly distributed than what one gets with a traditional bulb. With three different brightness stages, it’s also possible to get the exact amount of light you need in a particular situation. The dimmest setting, for instance, is perfect if you need a bit of light before the sun has risen in the morning. By contrast, I never felt like I needed more light with the lamp set to its maximum setting; that’s not something I can say with past lamps I’ve owned.

OLEDs also present a number of significant advantages when compared to previous lightning technologies like LED and CFL. For anyone looking at the Aerelight’s $300 price tag in dismay, the main advantage is that the lamp basically represents a one-time investment. With regular use and care, its panel will never need to be replaced; over its life the Aerelight’s panel will dim, but never come to the point where it’s inoperable.

Moreover, in contrast to any other lightbulbs you may have owned, OLEDs produce very little residual heat. In fact, you can touch the panel without any fear of burning your hand. They’re also far more energy efficient than their predecessors: the panel uses 80 percent less energy than a traditional 60W bulb (at its maximum brightness setting it only uses 9W), and, unlike a CFL, there are no dangerous gasses trapped in an OLED panel.

Having used the Aerelight now for more than two weeks, I can unequivocally say that OLEDs represent the future of lightning. Whether that means it’s worthing buying right now is another question. Despite the issues I mentioned at the start of the review, I found it difficult to go back to the IKEA lamp I was using before the Aerelight. Good lighting, like so many things, is often only appreciated in its absence. More personally, as someone that finds the obsolescence that’s built into so many of today’s gadgets deeply troublesome, there’s something remarkable about a piece and technology released in 2015 that, for all intents and purposes, is built to last.

The $300 tag is definitely hefty when looked at its own, but it’s not like the Aerelight is the first and only lamp released at that price point. Visit the two furniture stores located below MobileSyrup’s office, and you’ll find a variety of lamps at that price range, but none of them have an OLED panel affixed to their frame. Viewed through that lens, I think the Aerelight is a much more reasonable proposition. If you’re already in the market for a more upscale light source, then the Aerelight, with its far more technologically advanced OLED panel (and wireless charging capability) is definitely worth considering.

The Aerelight is available for $299 CAD from the company’s web store.