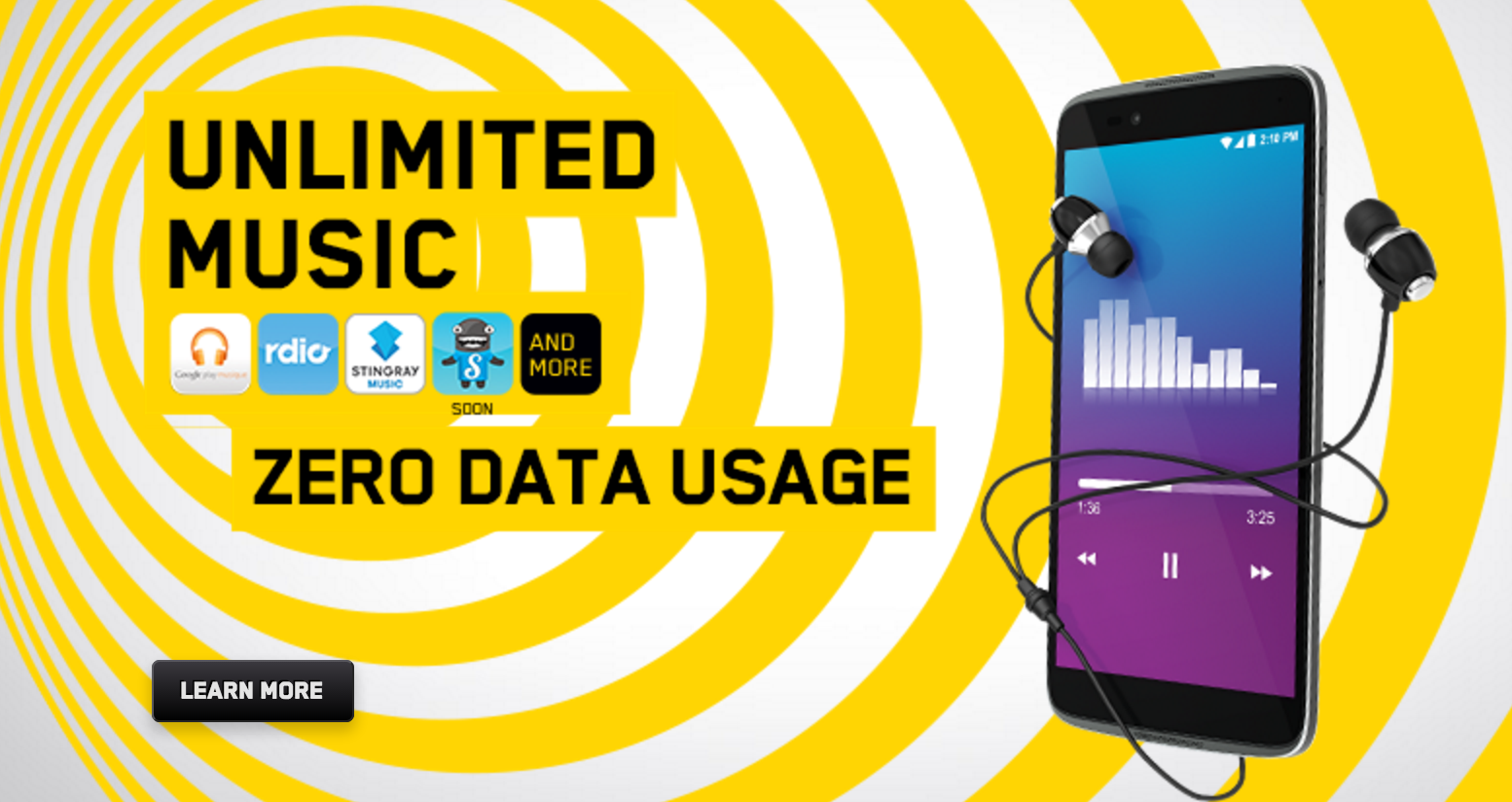 Streaming music has the power to change the world — or at least the telecom` industry.

Videotron has launched a new initiative today that is great for its mobile customers, but puts itself squarely in the sights of Canada’s regulator.

Called Unlimited Music, it exempts the wireless traffic for a number of popular music streaming services, including Spotify, Rdio, Google Play Music, Deezer and Canadian-owned Stingray Music, which recently went through a mobile-focused overhaul after rebranding from Galaxie.

Similar to T-Mobile’s Music Freedom, customers who subscribe to the above services can listen all they want without the bandwidth used counted towards their monthly plan. Videotron offers three Premium plans, in which Unlimited Music is bundled, with data allotments ranging from 2GB to 6GB.

While consumers may love the fact that the streaming music they subscribe to no longer affects their precious monthly data bundle, the initiative may be a challenge for the CRTC to regulate. Earlier this year, the regulator forced Bell and Videotron to stop zero-rating their own streaming television services, a term that describes the exclusion of certain types of traffic from being billed.

Unlimited Music is certainly practicing zero-rating, but the CRTC’s issue with Bell’s Mobile TV and Videotron’s illico services was that the telcos were advantaging their own apps over the competition. Unlimited Music merely exempts a class of apps, streaming music, from being acknowledged as data.

That may still be a problem for the CRTC, though, as only a tiny number of the myriad streaming music services available to Canadians are exempted. Apple Music, for example, is not on the list, nor the popular TuneIn Radio. And what of podcasts and audiobooks? Videotron counters this claim by promising new services will continually be added — Songza and “many others” are coming soon, it says — but in the meantime users must acknowledge and seek proof that their favourite music apps are in the list. 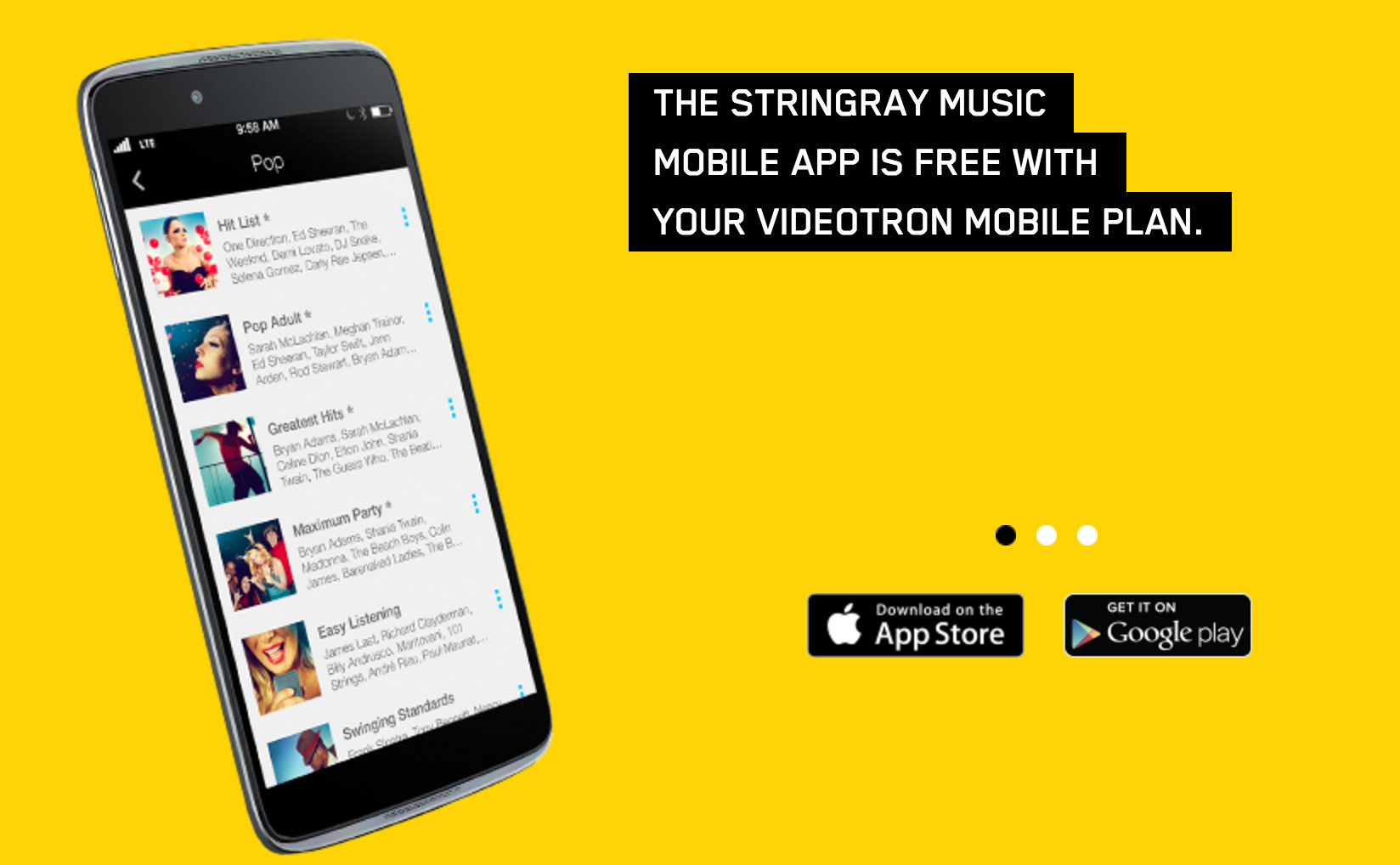 Videotron also has entered into a deal with Stingray Music that gives the carrier’s mobile customers “a bunch of exclusive channels,” according to the company.

It’s unclear whether Videotron has a cut-off point for music streaming. Say you decide to leave Spotify streaming for days on end; at some point, Videotron would likely choose to throttle or cut off your internet service. Or, on the flip side, would Videotron throttle your music streaming if you go over your regular 2/4/6GB monthly allotment?

According to an industry expert I spoke to, T-Mobile’s policy is to exempt Music Freedom users from throttling when their customers go over their monthly bandwidth limit, which in Canada may be seen as a “double benefit”, contravening the net neutrality laws that prevent undue preference for certain services. Since Videotron neither owns these service nor the content they distribute, it’s unclear where this would sit in the CRTC’s definition of net neutrality.

Earlier this year, Fido unveiled its new Pulse Plans, which offer customers two years of free Spotify service when signing a two-year contract. But Rogers, Fido’s parent company, is merely subsidizing the cost of the service, not forgiving the bandwidth it uses.

Unlimited Music is a compelling offering for Videotron customers, one that is likely to be imitated by other carriers in the months to come. But it’s unclear whether it will be challenged by those same carriers, or whether Videotron will move quickly to add the big-name services like Apple Music is does not yet offer. 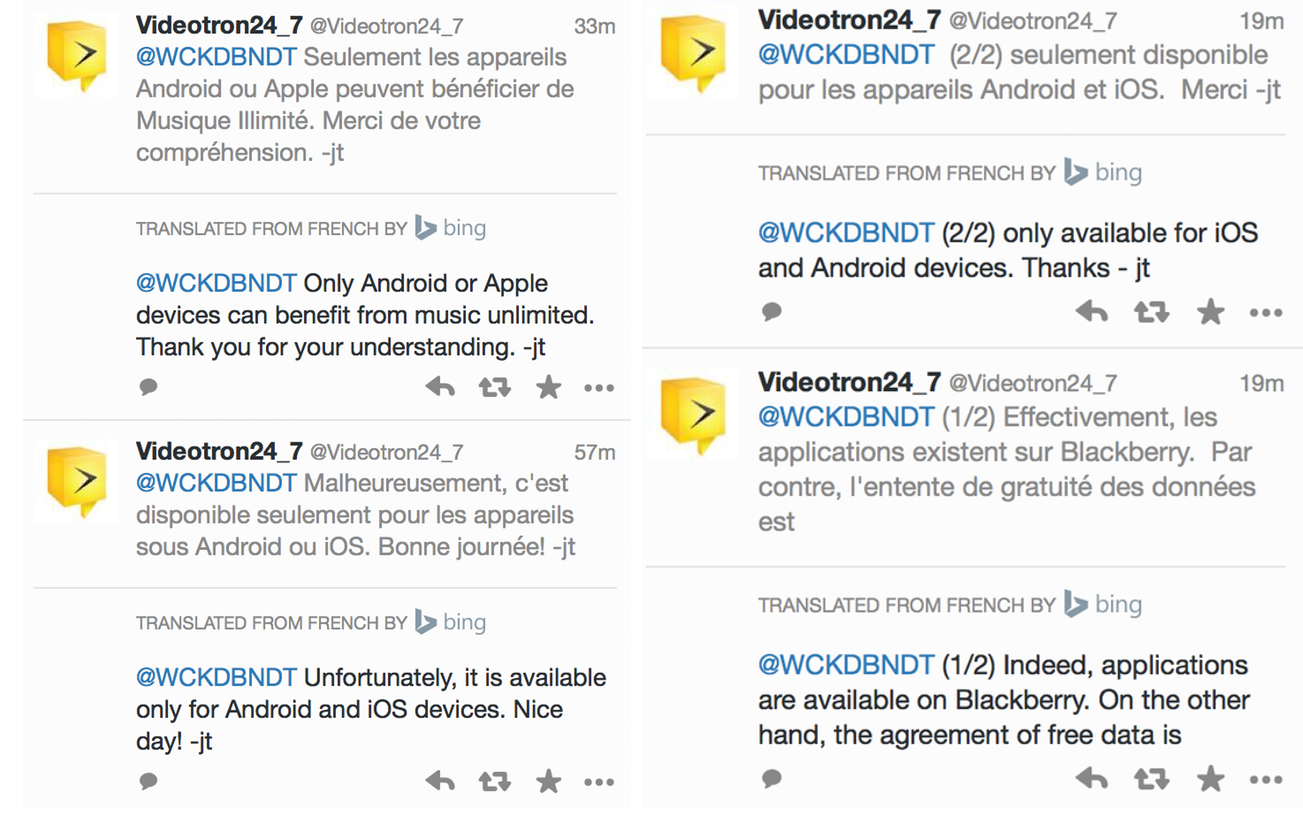 Update: Videotron has provided a bit more detail about the Unlimited Music initiative. Users will need to have an LTE-enabled SIM card in their phone, so older 3G-only devices are not eligible.

And in a move that will upset a bunch of BlackBerry and Windows Phone users, the service is limited to iOS and Android. According to a Videotron representative on Twitter, even BlackBerry 10 devices running legitimate Android versions of apps like Spotify and Rdio will not be exempt from the traffic regulations.

Thanks to Twitter user Wicked Bandit for the tip.

Vidéotron launches its Boxing Day deals on phones and plans