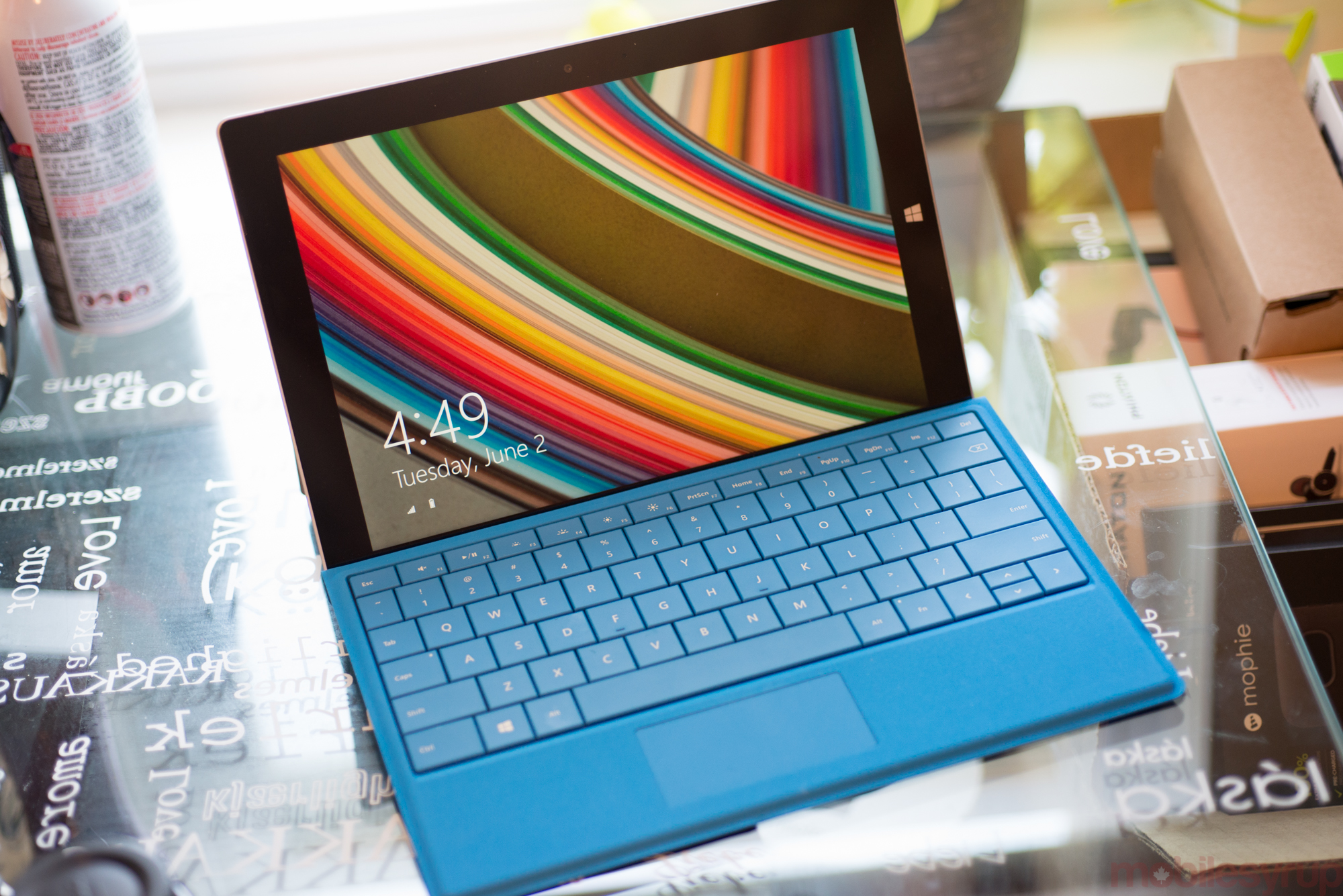 Let’s start by saying that the Surface 3 is neither tablet nor laptop. And right now – that is, until July 29th – it is probably neither. As much as Windows 8.1 puts the emphasis on making the Surface, and all twos-in-one, relatively usable as both portable and lap-hugger, it won’t be until Windows 10 that the true meandering beauty of hardware/software marriage will be achieved.

Until then, though, we can look at the Surface 3 on its own merits, in its current state. And as far as tablets go, this one is pretty darn good. 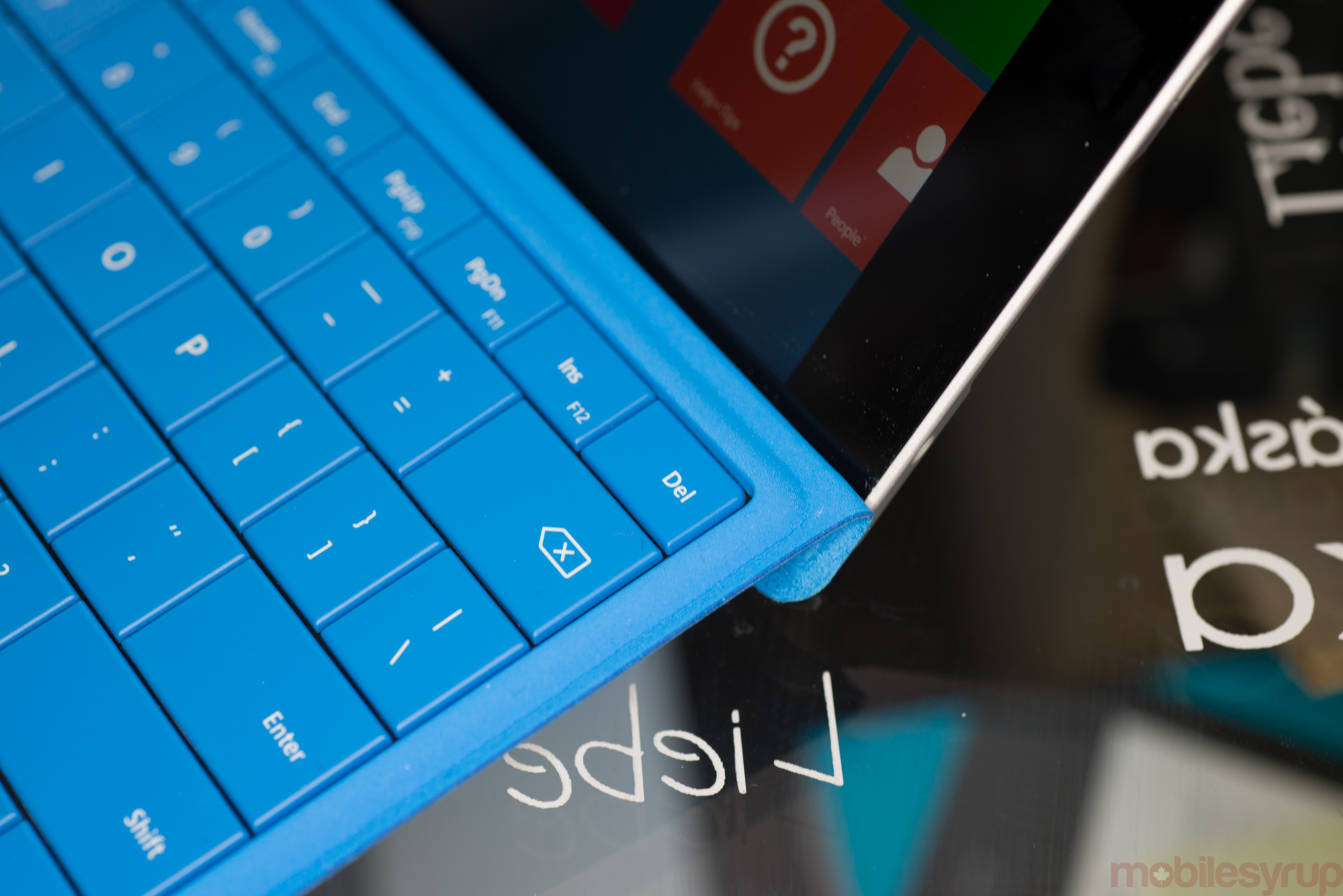 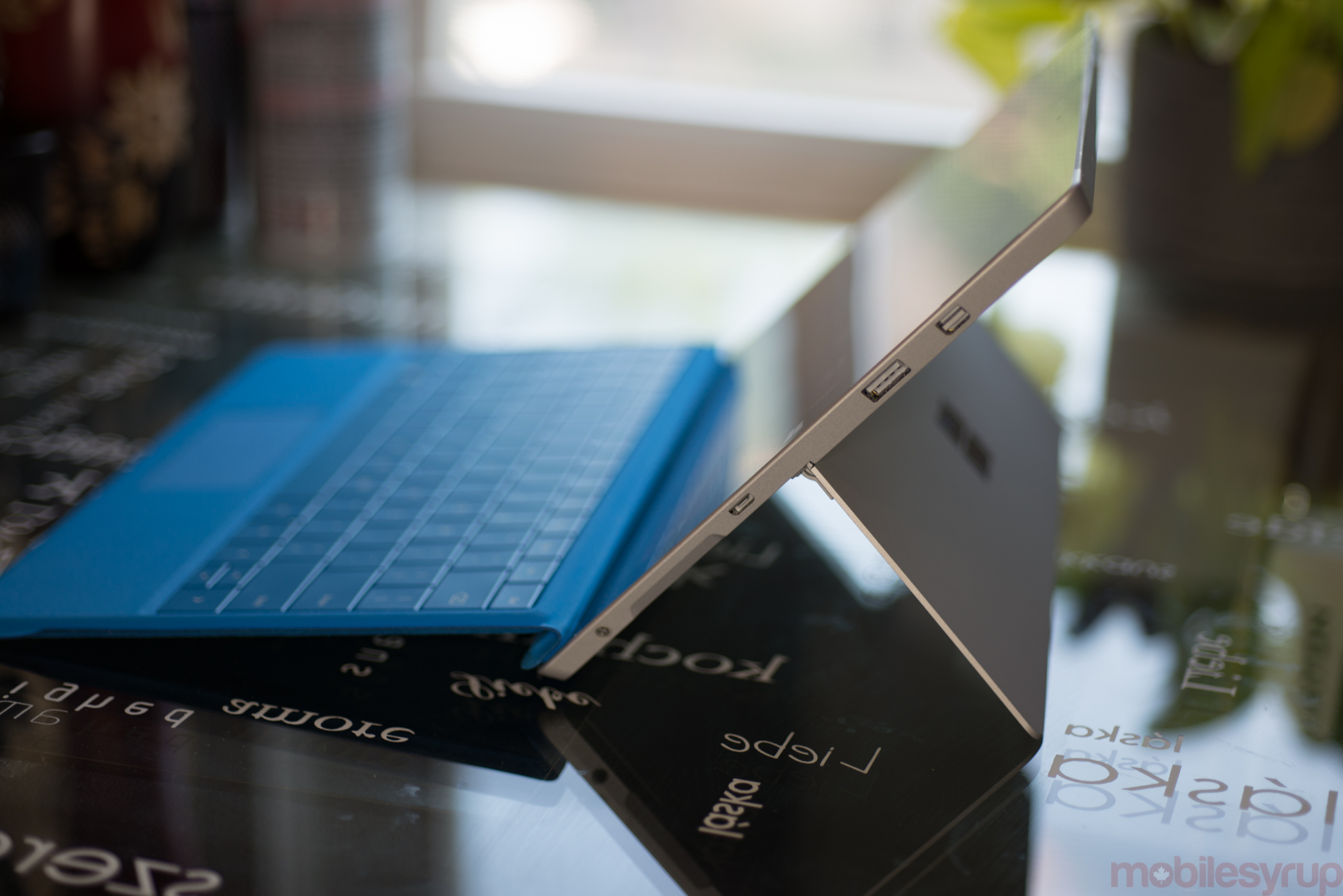 The Surface 3 is well-made and relatively light for its size, though it is no iPad Air 2. But that’s a good thing, because taken on its own the Surface 3 is far more of a desktop-class computer than anything released in the iOS or Android ecosystem in recent years.

Indeed, the Surface 3 is quite an odd duck. It runs Intel’s latest Atom processor, which finally matches the performance and energy efficiency of the latest ARM processors while ensuring legacy compatibility with older Windows apps. This ensures that while the transition to Microsoft’s Universal Apps platform continues, Surface 3 owners will be able to benefit from all the older apps not distributed through the Windows Store, such as Photoshop and Dropbox. 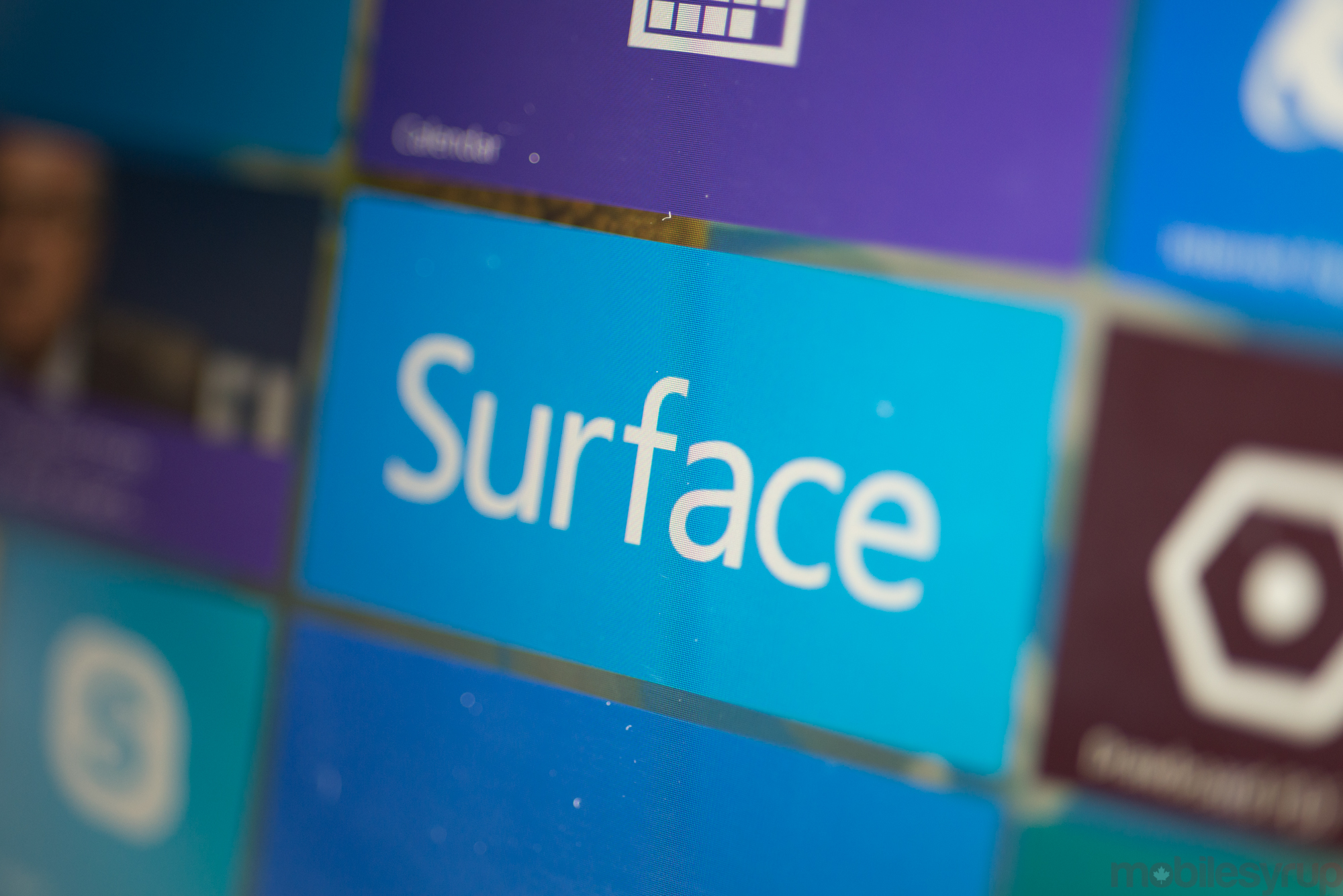 It also took three generations of smaller Surface tablet to finally get the form factor just right. A 10.8-inch 1920×1280 pixel screen is big enough to comfortably open a spreadsheet without squinting, but compact enough to hold in one hand while reading a book on Kindle or Kobo. The 3:2 aspect ratio, something the larger and more expensive Surface Pro 3 adopted last year, helps in this regard, ensuring that the tablet isn’t unnecessarily tall when held in portrait mode.

Like all Surface tablets, the third-generation one is made from a light but sturdy magnesium alloy. I’ve always adored the smooth, metallic finish of the Surface line, and this one is no exception. But the Surface 3 has wisely retained the advantages of its predecessors while eschewing their bulk; even with a Type Cover attached, the Surface 3, at 890 grams, is still lighter than the new MacBook, though it is thicker and denser. 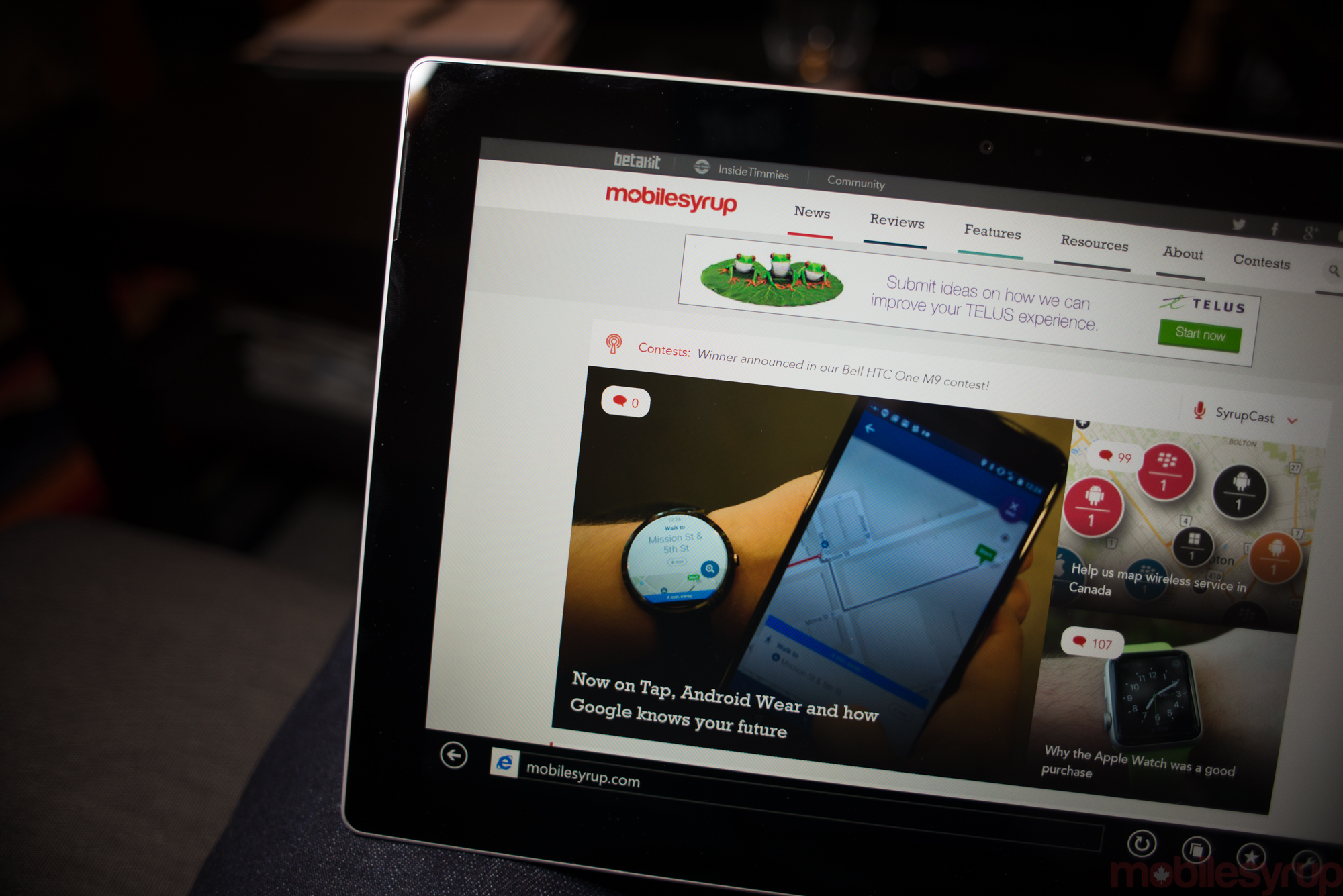 Where the Surface Pro 3 introduced a hinge of unlimited variety, the Surface 3 pares those positions back to just three, but they meet my needs for most situations. The steepest hinge is great for watching movies with the tablet propped on a table; the middle one is ideal for typing while on a desk; and the widest angle is perfect for resting on a lap.

From a hardware perspective, I have few complaints about the Surface 3. It exists as a tablet when necessary, and has compatibility with Microsoft’s excellent pen, which is unfortunately sold separately with this model. I demoed the 4GB / 128GB model and found it had few performance issues, though the Atom chip is certainly not ideal for most desktop-like applications; don’t expect to quickly encode video or play hours of demanding games on the Atom chip’s anemic graphics chip. 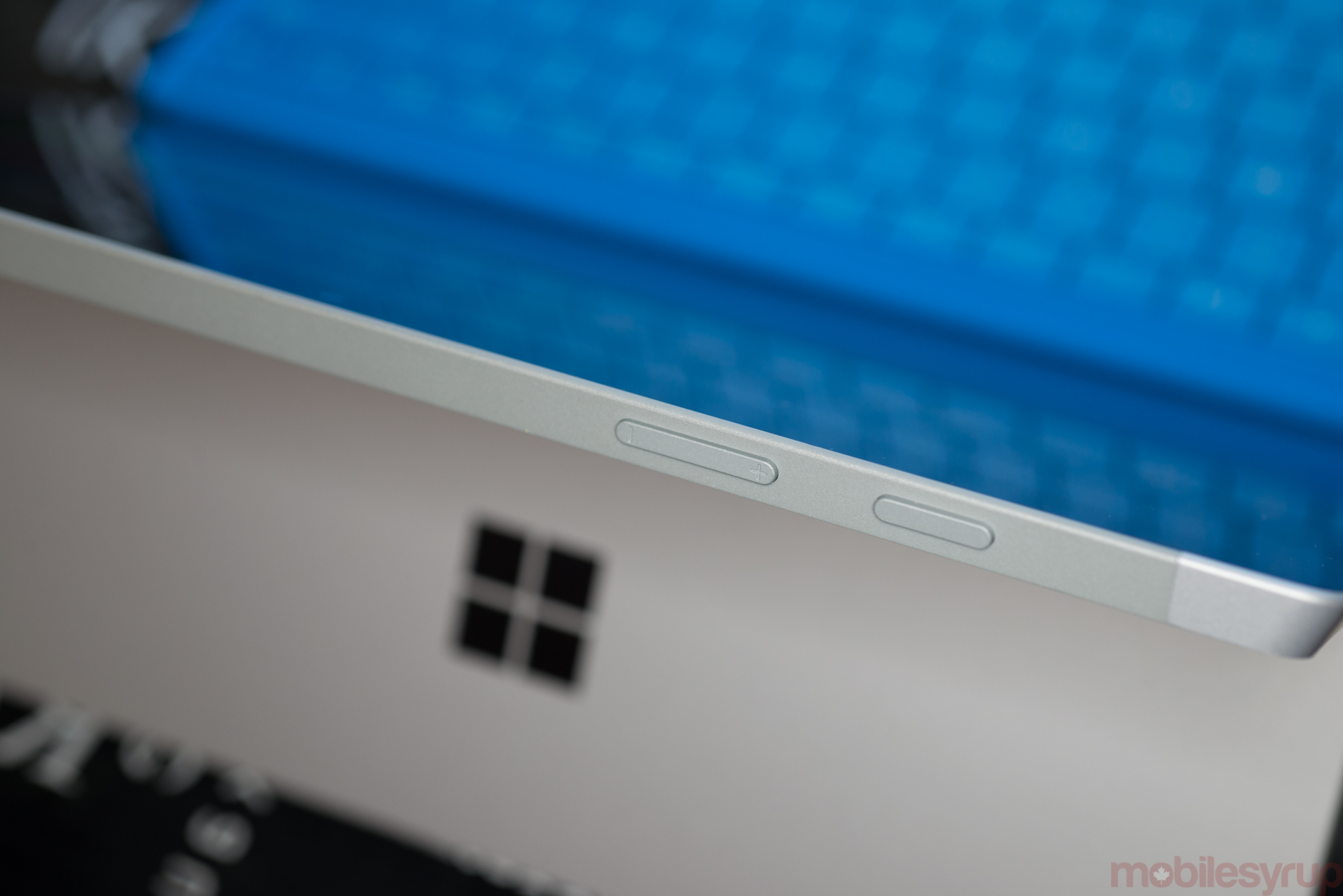 But if viewed as an iPad competitor, the Surface 3 delivers in spades. The problem with the Microsoft Store’s lack of app selection is troubling, but the glut of excellent desktop apps, combined with a capable web-based experience through Chrome, Firefox or even Internet Explorer, should make up most of the difference.

Coming from a MacBook Pro, I rarely noticed performance issues, and even attaching a 4K monitor to the included DisplayPort (the device also has a USB 3.0 port and charges quickly via microUSB, a first for the Surface line) didn’t yield substantial performance drops. 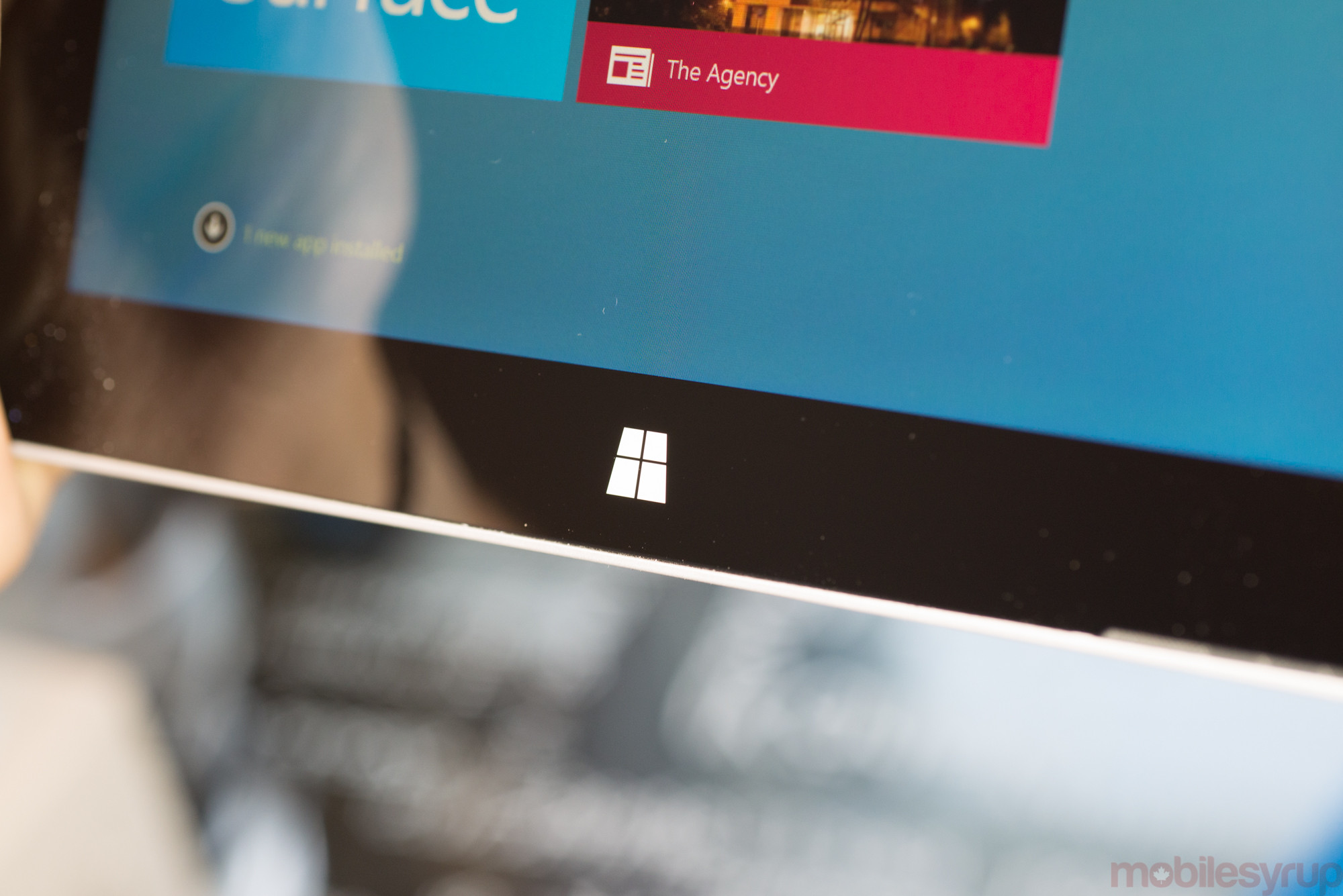 Here’s the thing, too: as reviewed, the Surface 3 is just a decent computer. That’s due to the awkward marriage of desktop and touch support in Windows 8.1, which has been languishing while the company iterates on Windows 10. When that new version gets released on July 29th as a free update to all Windows 7 and 8.1-based computers, the Surface 3 and its ilk will greatly benefit from its new mouse-and-keyboard optimizations.

On the battery side, the Surface 3 lasted as advertised: I got about 10 and a half hours of moderate usage from the tablet, with what I would consider a pretty typical use cycle of work, Netflix and light gaming. 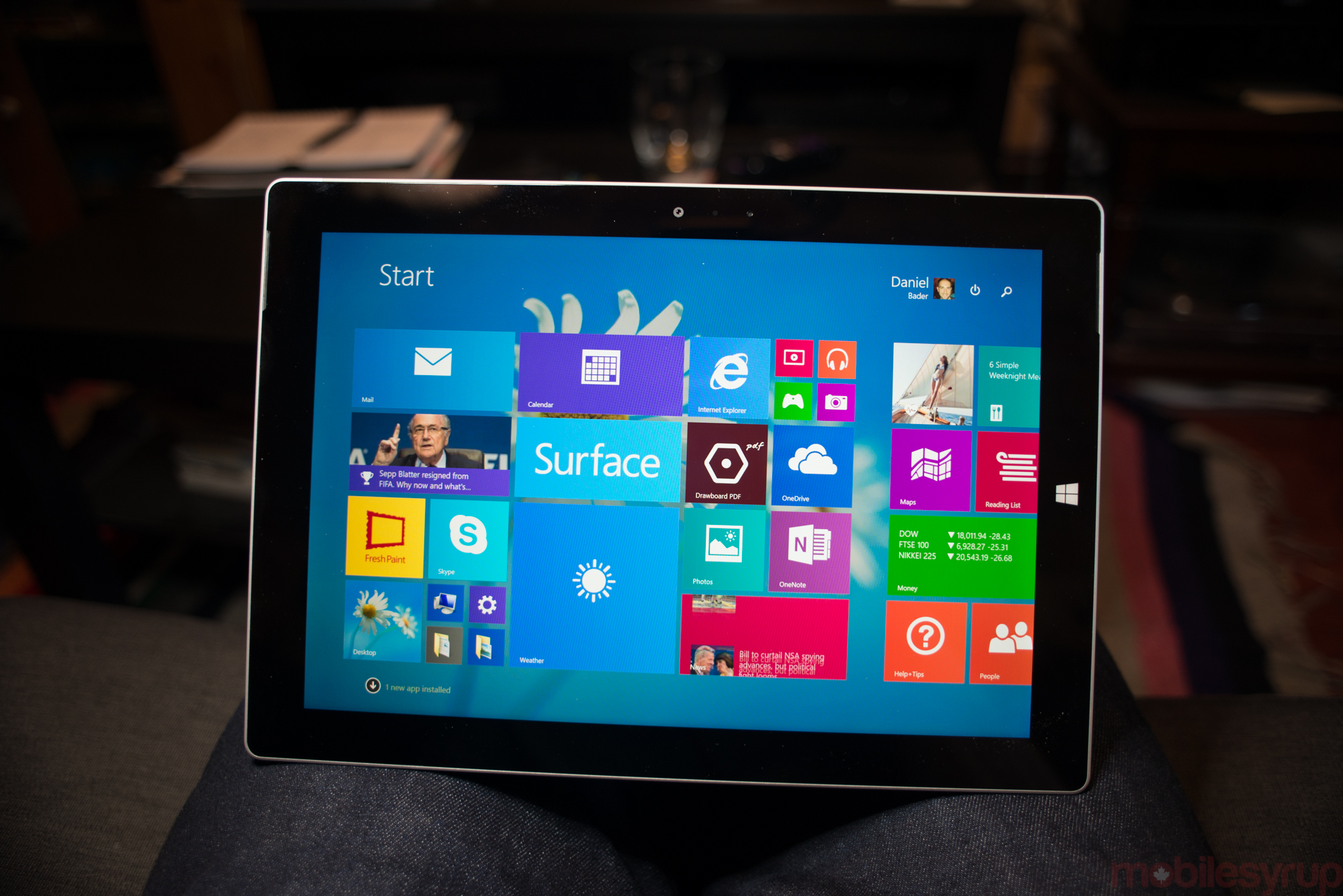 The Surface 3 is expensive. The 2GB RAM / 64GB storage entry level model, which due to the sizable install footprint and memory requirements of Windows 8 and 10 I wouldn’t recommend, costs $639 CAD, and that’s without the much-balihooed Type Cover. The next model, which swaps in 4GB RAM and 128GB storage, costs an extra $130. Throw in a $160 Type Cover and you’re looking at a solution that, after taxes, costs over $1,000.

While the combination of a higher-end Surface 3 and Type Cover makes for a potent combination of tablet and laptop, its app store is under-served in the former role and its hardware under-powered in the latter. Many of the arguments for the purchase of a Surface 3 over its Pro kin rest on its success as a tablet, but that’s where I’m stuck. Any modern iPad or Android tablet runs circles around the Surface in what we would traditionally consider large, flat touchscreen use cases, such as browsing, gaming and communication. Aside from the sheer number of apps and games missing in the Windows Store, likely indefinitely, the Surface 3, shed of its Type Cover, is encumbered by the fact that for all of its touch optimizations, Windows, and therefore the Surface itself, is just not that useful without a physical keyboard.

Microsoft wants you to buy the Surface 3 with a Type Cover, but also wants to advertise it as a tablet that doesn’t need one. The truth is that I’ve never seen anyone use a Surface primarily as a tablet, nor do I think most prospective buyers are looking to do so. The Surface 3 comes close, but it will be up to Windows 10 and the growing number of Windows developers looking to create great Universal apps, to make the Surface 3 as tantalizing a tablet as it is a laptop.

The other issue with the Type Cover is that it just isn’t a great input solution. The keyboard is mushy, with inconsistent travel and a spacebar that never quite satisfies. And the mouse is even worse, with painfully slow refresh rates, poor multitouch support and native drivers that don’t offer nearly enough customization. While the Surface 3 itself has a great touch screen, being forced to rely on it creates an awkward hybrid input model. Adding a wireless mouse improves the situation somewhat, but the Surface 3 rarely feels as self-contained as Microsoft wants it to. 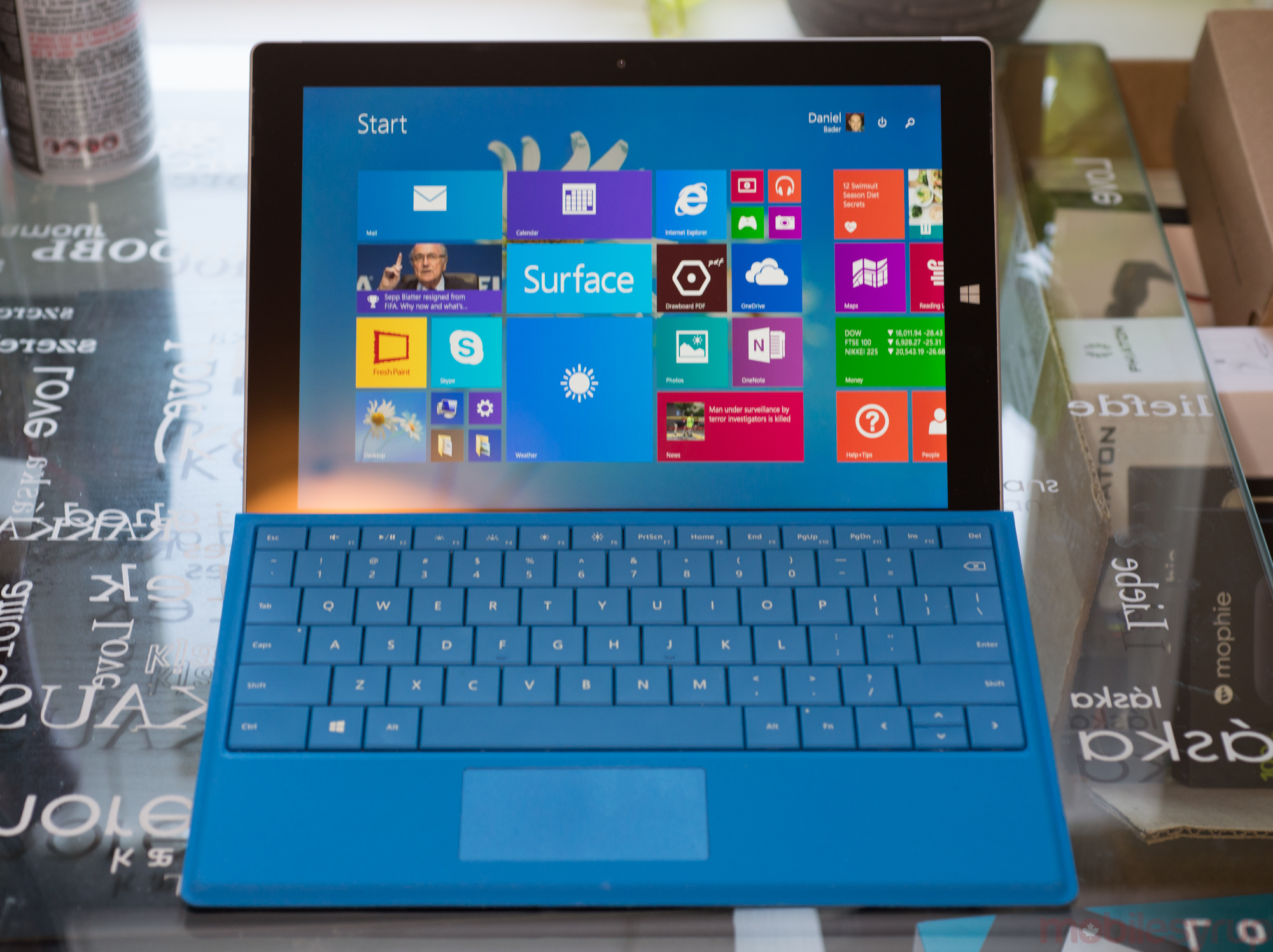 So, should you buy one?

The question I so often get asked about the Surface is whether it is the best way to use Windows. A few years ago I would have assented, even with the less accessible hardware. But competitors like Asus, Acer, Lenovo, HP and Dell have thoroughly narrowed the gap between tablet and laptop, and offer what I consider to be better tablet-like experiences that cost only a bit more than the Surface 3 itself.

On the cheaper (and significantly less desirable) side, Asus’s latest Transformer Book T100TAM lacks the latest-generation Atom chip and high-resolution screen, but for around $500 CAD comes with a pretty decent keyboard, a year of Office 365 and a full Windows 8.1 experience.

Lenovo’s entry-level Yoga 3 tablet costs $799 CAD, but comes with a more powerful (though lower-clocked) fanless Core M chip with a proper (if still underpowered) Intel HD graphics chip, 4GB of RAM and 128GB of SSD. The Core M has been criticized as a stopgap solution between today’s Broadwell-Y, which provide small if meaningful improvements over Haswell, and Skylake, which should more capably scale to lower speeds than today’s Core series.

One advantage of the Surface 3’s Atom chip over the Core M is its heat output; because it is rated at 2 Watts compared to the Core M’s 4-6 Watt output, the Surface 3, even under load, rarely gets hot, and doesn’t throttle nearly as badly. On the other hand, Atom chips lack the Core’s many instruction sets, as well as Hyperthreading, though part of that loss is made up by having four cores rather than two on the Core M.

Ultimately, the Surface 3 fits into a pretty small niche, but promises to deliver a much better experience, both as a tablet and a laptop, when Windows 10 emerges in July. Until then, it’s worth shopping around to consider whether the Surface Pro 3 may be a better investment, or even a Nexus 9 with one of its fancy cases and an external Bluetooth keyboard.