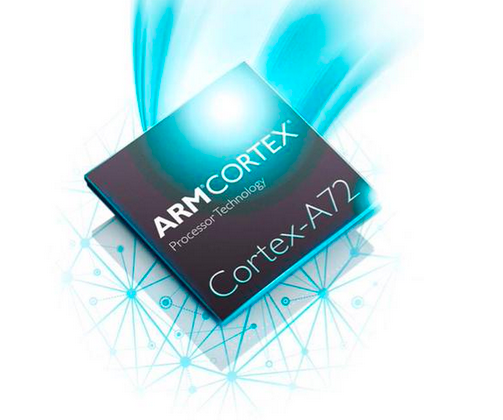 ARM today took the cover off of its new 64-bit processor and a new graphics core that should start appearing in smartphones and other small form factor devices next year.

Dubbed the Cortex-A72, we don’t know a whole lot about this processor just yet. The company combined the A72 unveiling with the announcement of a new integrated GPU, the Mali-T880, as well as a new CCI-500 interconnect. ARM has yet to publish much in the way of information on today’s announcements, including specifics on performance increases.

What we do know from the announcement itself is that the A72 is an ARM v8-A 64-bit chip and will supposedly consume 75% less power while delivering 3.5 times the performance compared to devices based on the Cortex-A15. Those are some massive savings in power consumption. The graphics processor promises “console gaming quality” or 1.8 times the performance of the Mali GPU in current generation smartphones.

Reduced power consumption, a bump (okay, spike) in performance, and higher quality graphics performance aside, for the average consumer, PCWorld reports that these chips will also mean 4K video capture at 120fps. ARM is also targeting the IoT industry with the A72, a smart move if our phones are to become the hub through which we access and communicate with all of our connected devices.

ARM says it has already licensed its new technology to ten partners and that the first chips based on these new designs will come out next year.