BlackBerry CEO confirms the company is working on tablet concept 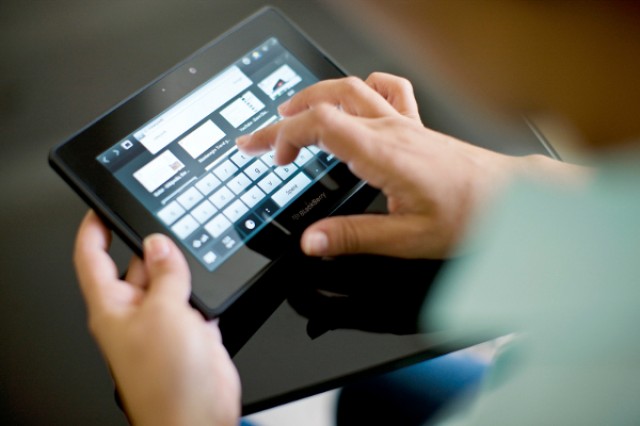 Buoyed by the numerous positive headlines and a sell out launch of the Passport, BlackBerry has already confirmed that it will be experimenting with one whacky device every year. We also know that there will be a Passport 2 that is easier to use with one hand.

Beyond that, we don’t know an awful lot about BlackBerry’s future hardware plans. However, CEO John Chen this week gave us a little tidbit of information to tide us over on the smartphone and tablet front. N4BB points to a video of Chen’s appearance at the MIT Enterprise Forum in Hong Kong where he reveals that the company is actively working on tablets. He also talks about BlackBerry’s maximum size for phones with physical keyboards.

“I would love to have a tablet. I don’t want to build just another tablet, there are enough tablets out there,” Chen told the audience at the MIT Enterprise Forum. “If we’re going to build a tablet, we’re going to build something, I hope, reasonably attractive. No doubt, we’re working on it.”

When someone asked about making a tablet, and then also making a larger 5-inch phone, Chen answer both questions in one, finishing with a hint that BlackBerry has a design that would allow for a physical keyboard on a tablet.

“You know, the tablet with physical keyboard is a huge challenge, right? So that’s something we want to think about. We do have a five inch phone, like Z30, but they don’t have physical keyboards,” Chen said. “When you put a hardware keyboard … to make it physically manageable, the largest size you’re going to see is the Passport,” he admitted. “At least in physical dimensions. But we are working on a concept that may solve both of your questions [tablets and a 5-inch phone]. I do agree with you. Wouldn’t it be nice, to have a large enough screen, to also have it be touchscreen, and to also have a physical keyboard, but you cannot make it so awkward that you can’t keep it anywhere.”

There have been rumours of a slider design for a tablet in the past (and obviously a slider phone is nothing new), but it would be interesting to see if that’s the path Chen is considering pursuing. BlackBerry is launching a concept device at Mobile World Congress next year so we should know more about the company’s hardware plans then.