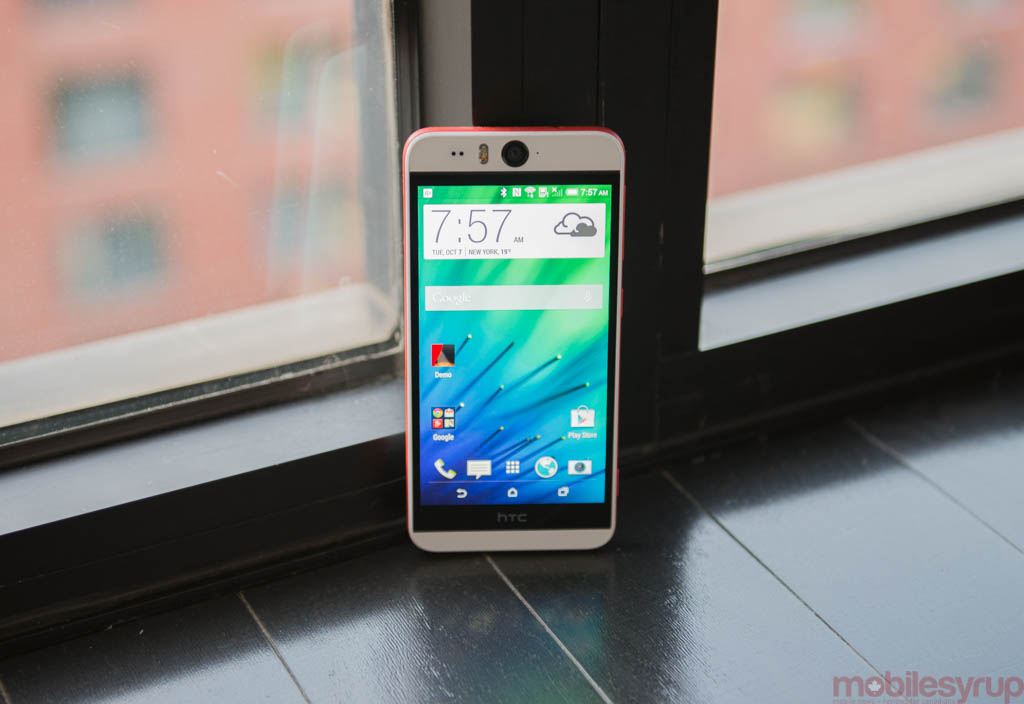 HTC has a new phone on the market, and it’s nothing if not interesting.

With the guts of the One M8, the body of the Desire 820 and the cameras of, well, nothing before it, the Desire Eye doesn’t quite fit into the company’s traditional device strategy — and that’s by design.

The Desire Eye, aside from being a beautifully-crafted piece of polycarbonate, has two 13MP cameras, front and back. In fact, the sensors are identical. The front-facing module even contains the same dual-toned flash as its rear counterpart. 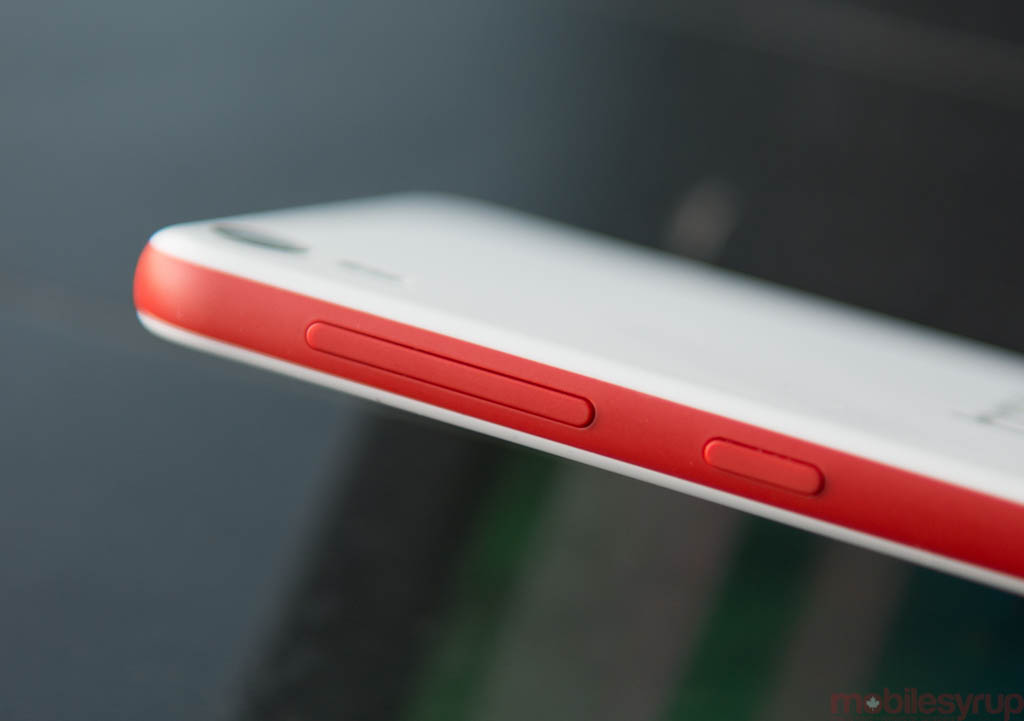 Why do this? Well, selfies for a start. HTC wants to be the premiere supplier of vanity-friendly imaging solutions, and with the rise of high-resolution front sensors from Sony, Nokia and others, HTC sees a market need.

In other areas, the Desire Eye is quite a typical HTC Desire product. It uses high-quality polycarbonate that obscures the seams normally found on mid-range devices, and the squared body with rounded corners feels very comfortable, with rubberized sides for easier one-handed use. The 5.2-inch Full HD display doesn’t have the superlative colour balance and endless viewing angles of the One M8, but it’s nonetheless an excellent panel.

The 2.3Ghz Snapdragon 801 chip may not be the fastest on then market, but it’s considerably better than most Desire products of the past. There’s 2GB of RAM and 16GB of expandable storage, too, along with BoomSound stereo font-facing speakers and three microphones for noise cancellation. 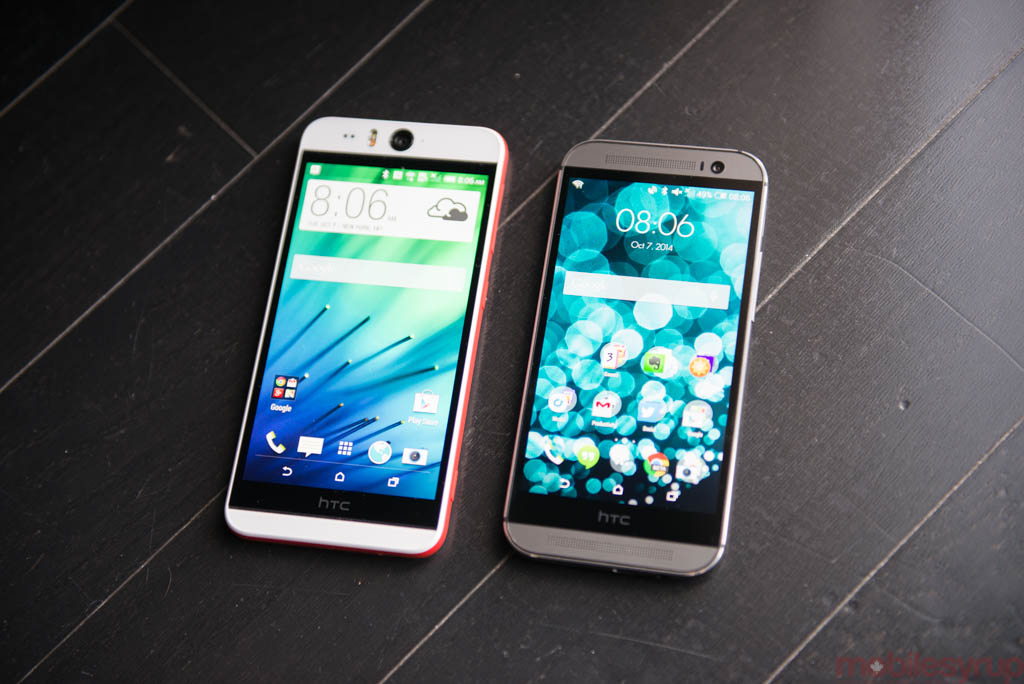 It’s nominally bigger and less aerodynamic than the One M8, which HTC says is due to Asia’s love of large-screen phones, a market on which the company intends to focus the majority of its marketing efforts with this product.

The front-facing speakers, front microphones and earpiece are beautifully integrated into the slight bezels above and below the display. It’s an attractive design consideration, and one of many small changes that makes the Eye stand above most products in its category. 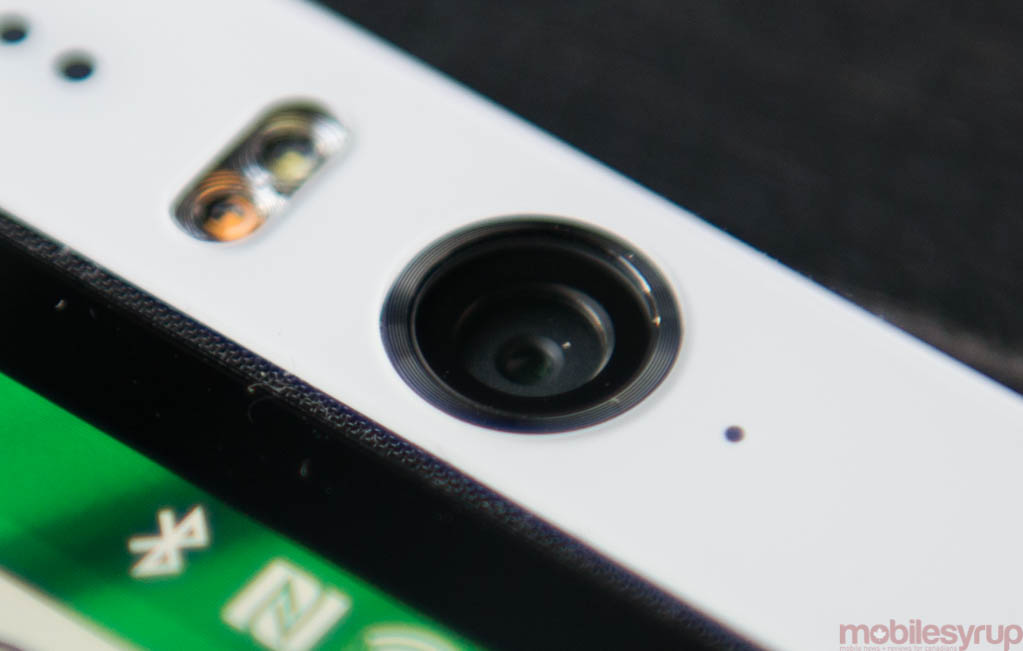 But certainly the main selling point of the device is its 13MP front-facing camera and accompanying photo options, which HTC is calling the Eye Experience.

With a dual-toned flash up front as well, HTC is promoting both detail from the high resolution sensor while augmenting low-light shots with a skin tone-friendly light. 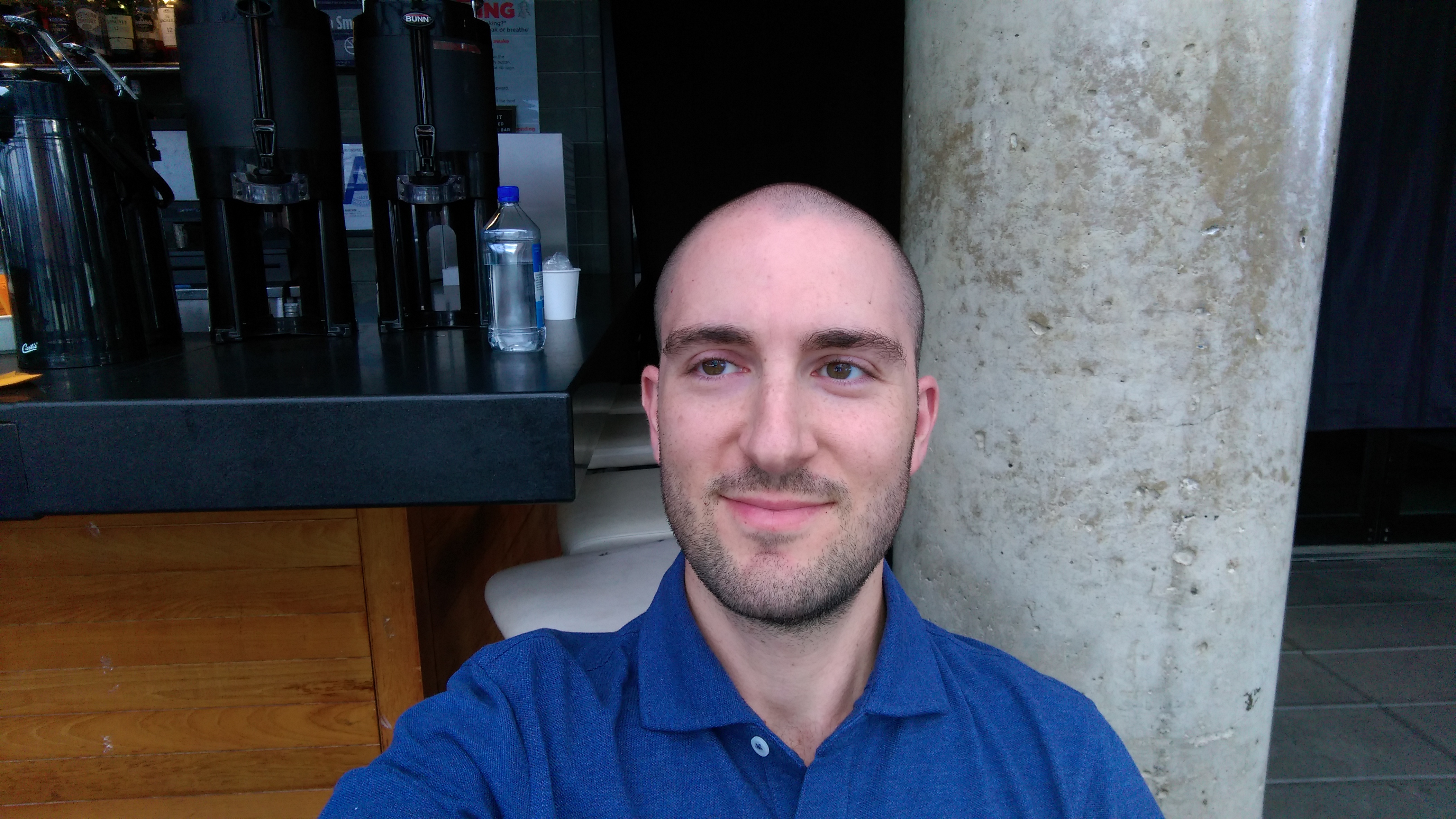 In addition to regular Selfie mode, which has been augmented with Smile and Voice Shutter (smile and the shutter goes; say “Smile” or “Say Cheese” and the shutter presses), there are now three front facing-optimized features for added self-promotion. 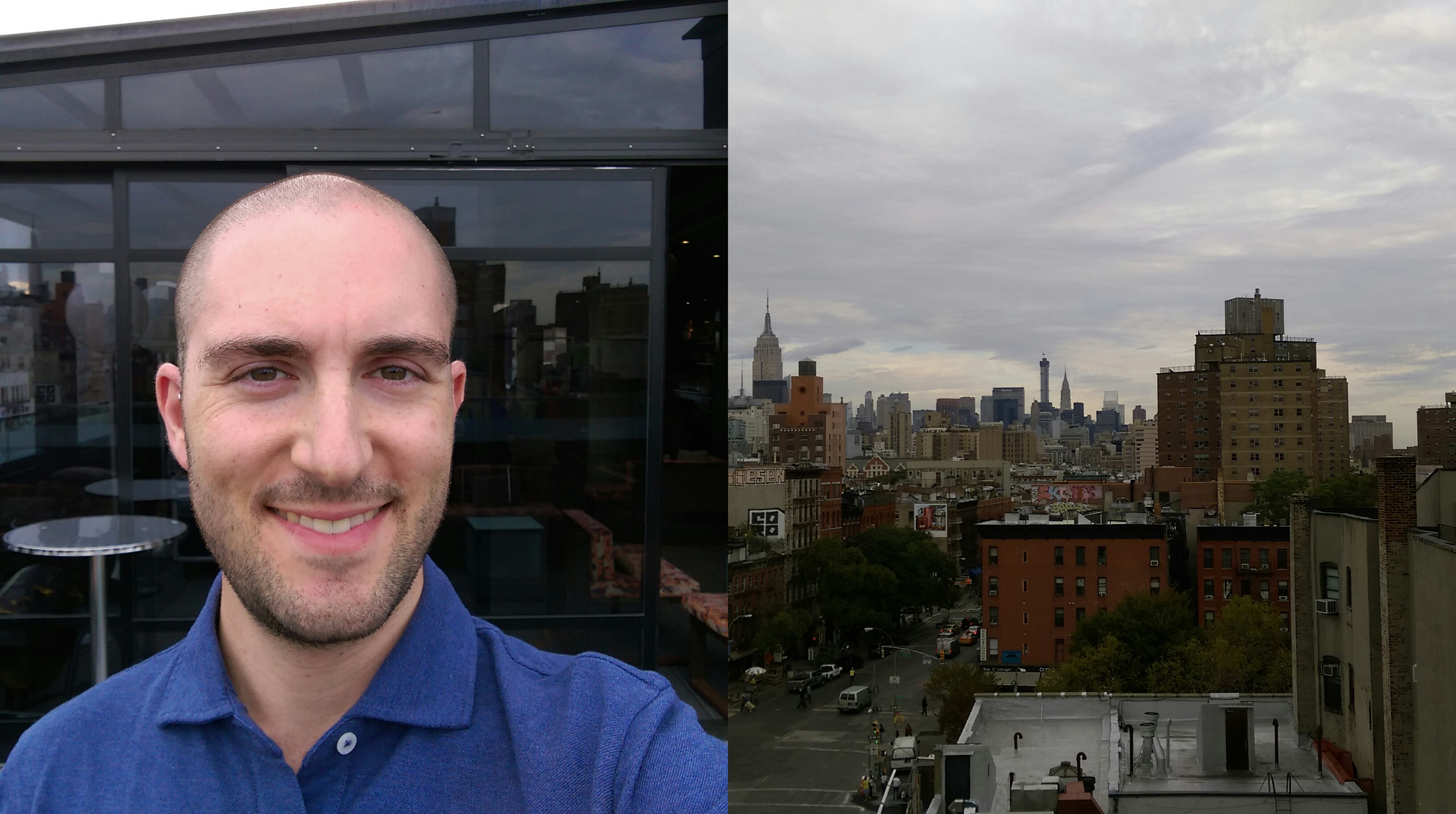 “Split Capture” is much like Frontback: it takes a photo with the front and rear cameras simultaneously, capturing the scene and one’s reaction to it.

Normally this would end up with half a grainy photo, but the Desire Eye manages to create the perfect compromise because no detail is in the process. 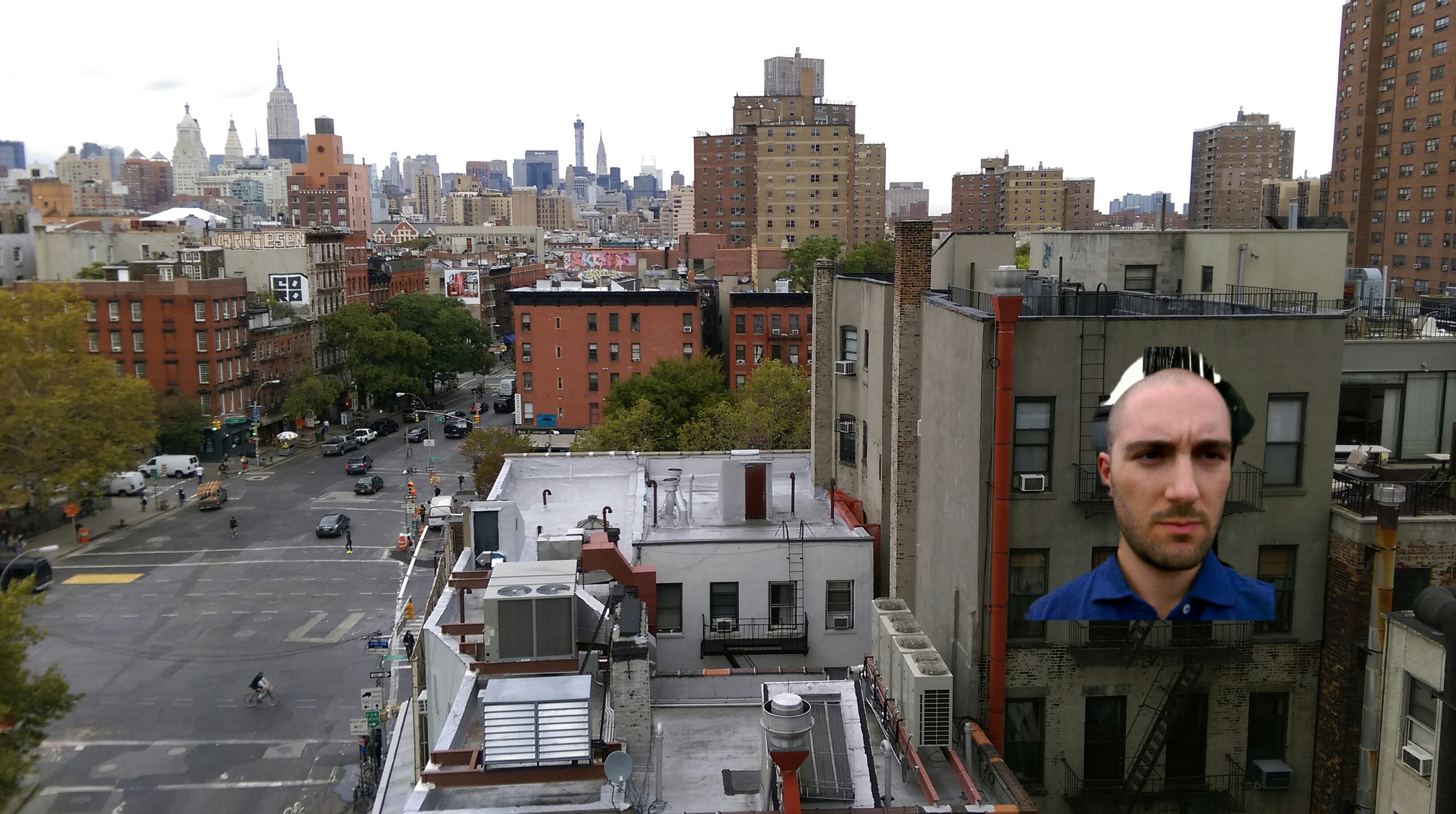 Less interesting is “Crop-Me-In,” a way to dynamically take ones disembodied head (the software detects it and attempts to cut the rest of the detail from the front camera) and insert it into the rear viewfinder.

It’s an awkward and often hilarious solution to a non-existent problem, but is fun nonetheless. 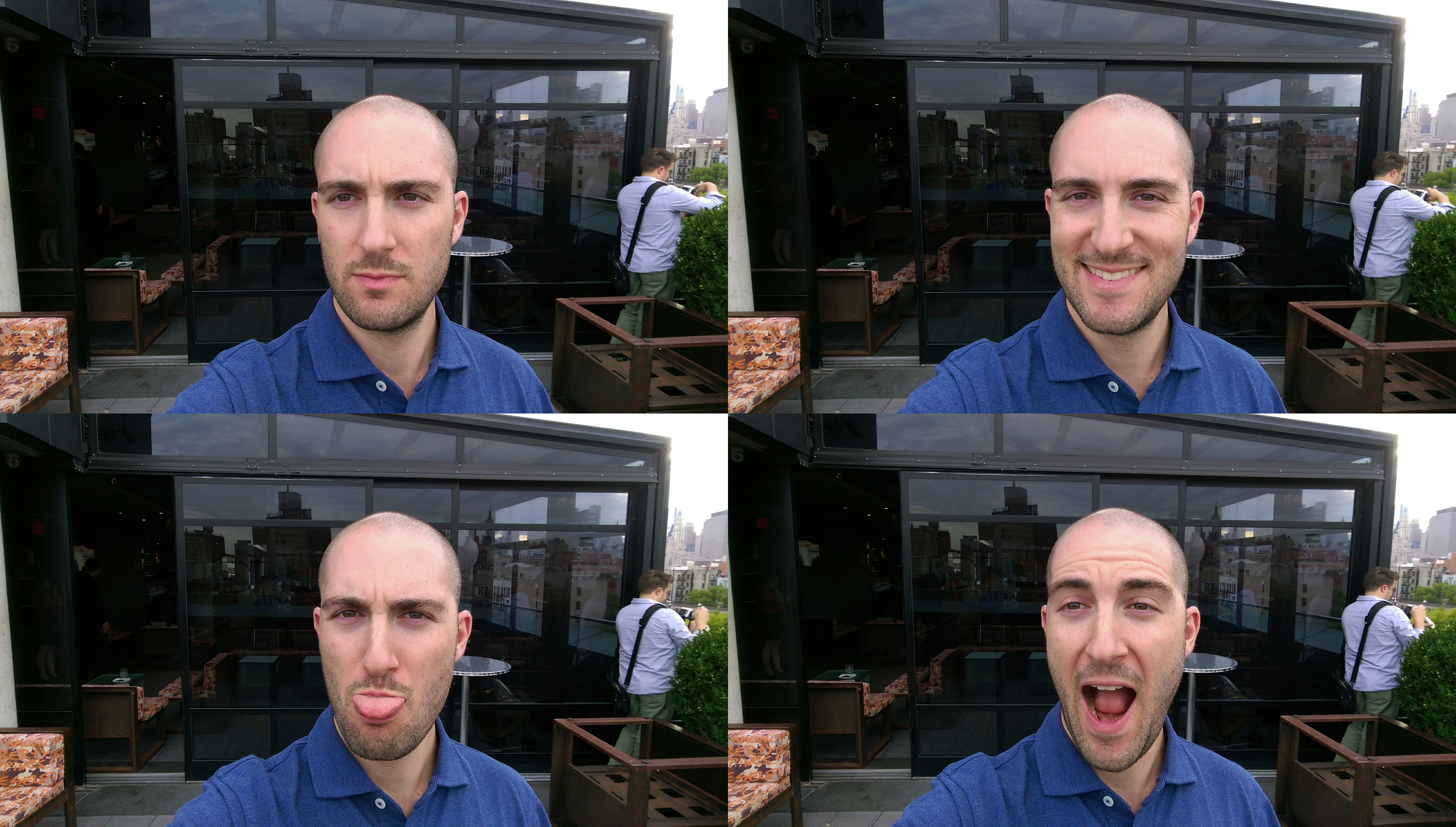 “Live Makeup” softens facial blemishes, which makes one’s face look like a living doll (and it’s on by default, so beware), while “Photo Booth” takes four photos in a row and arrays them in two rows of two. I think groups are going to love this feature, especially when paired with social networks (like HTC’s own Zoe). 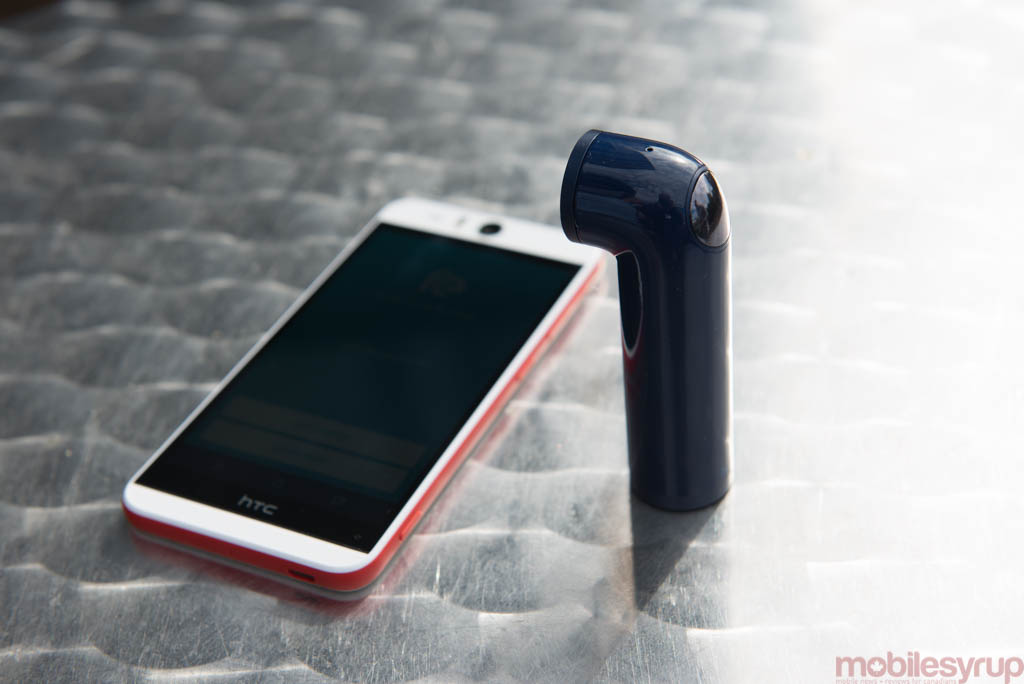 With a dedicated shutter button and IPX7 water resistance up to 1m for 30 minutes, the Desire Eye also positions HTC for the first time as a truly great outdoor camera. In our testing, though, the two-stage shutter took too much effort to depress, often resulting in the phone’s left side rising slightly from inertia, ruining the shot in the process. Holding the camera with two hands fixed the issue, but it’s not an ideal solution.

Our experience with both the front and rear sensors (they’re identical, with different lens compositions and focal lengths) was hit and miss. It’s the same 13MP sensor found in the HTC One Mini 2, capturing far more detail than the 4MP UltraPixel sensor in the One M7/M8, but low-light shots are virtually unusable. Autofocus and capture times were excellent, but overall fidelity was considerably lower than the 13MP photos taken from the LG G3 or OnePlus One.

Still, augmenting the same manual controls and amazing camera app UI from the One M8 with a decent 13MP sensor makes the Desire Eye one of the best camera experiences on Android, period, right up there with Sony’s high-end Xperia line. 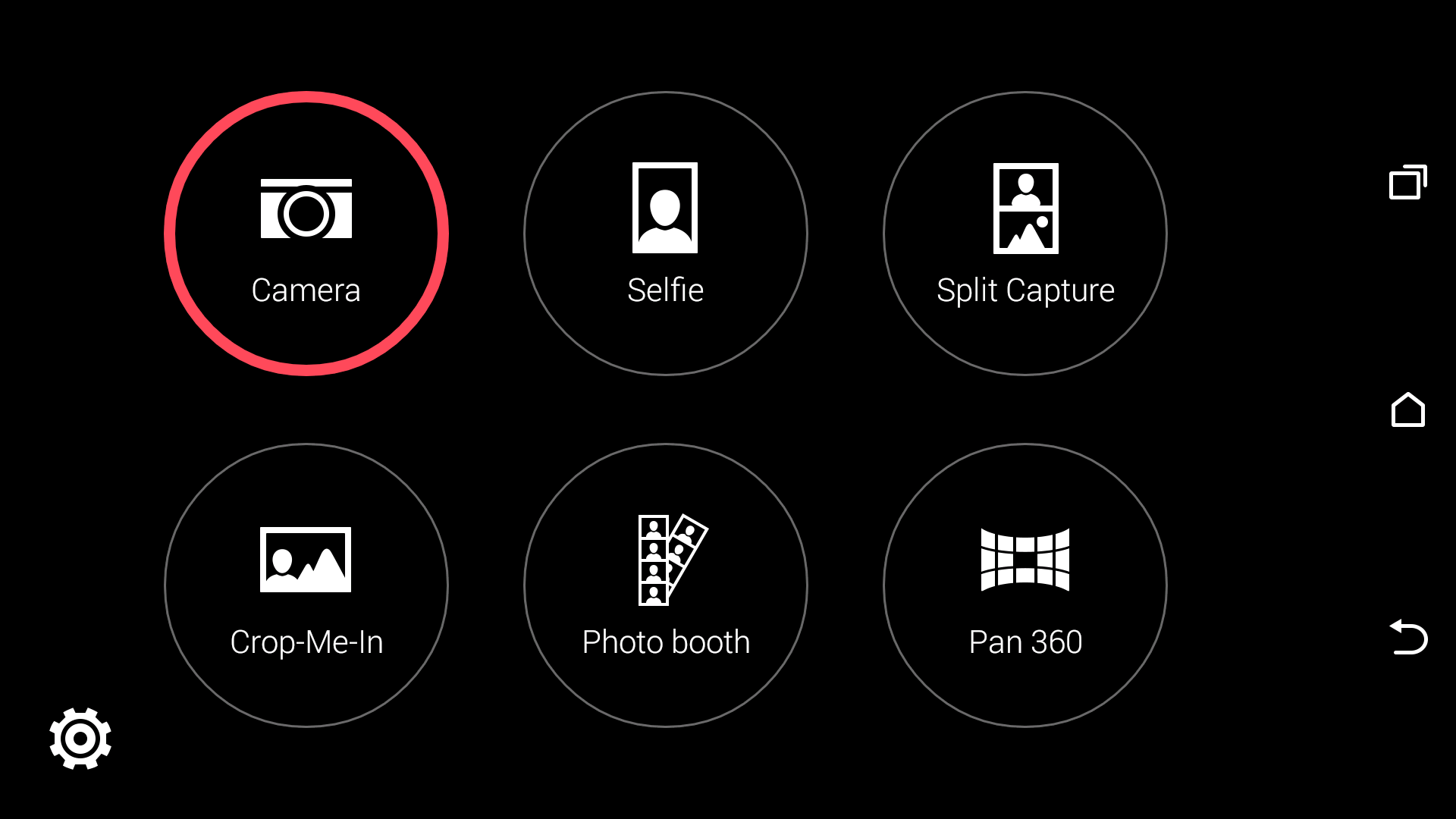 Something we didn’t get to try was a new face-tracking feature HTC has built into a number of conferencing apps like Hangouts and Skype. It uses its wide-angle front-facing lens to track up to four faces at once, isolating their mugs for conversations that are easier to follow.

The consumer-facing features of the Eye Experience are mainly better implementations of features other OEMs have implemented, but HTC’s focus on simplicity and design raises them above mere mimicry. 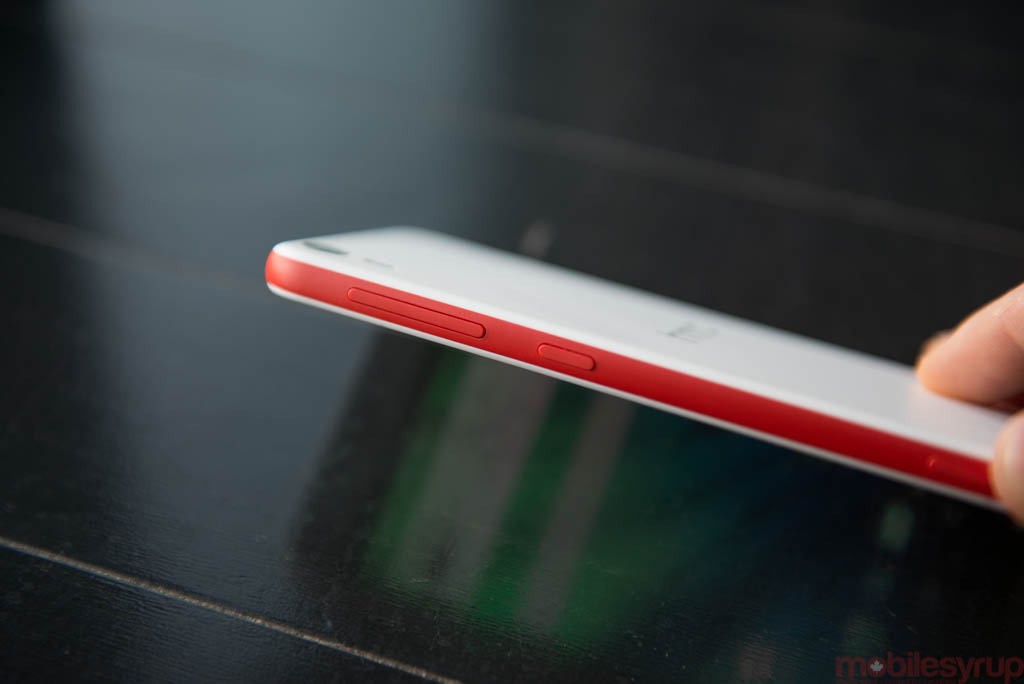 The Desire Eye is a very good smartphone, but HTC isn’t really sure how it will fit into its ever-changing product portfolio.

Meant to replace the One E8, a polycarbonate version of the One M8 that did away with the Duo Camera/UltraPixel setup, the Desire Eye needs to simultaneously boost the Desire series beyond its low-end and mid-range branding without alienating the premium One line. 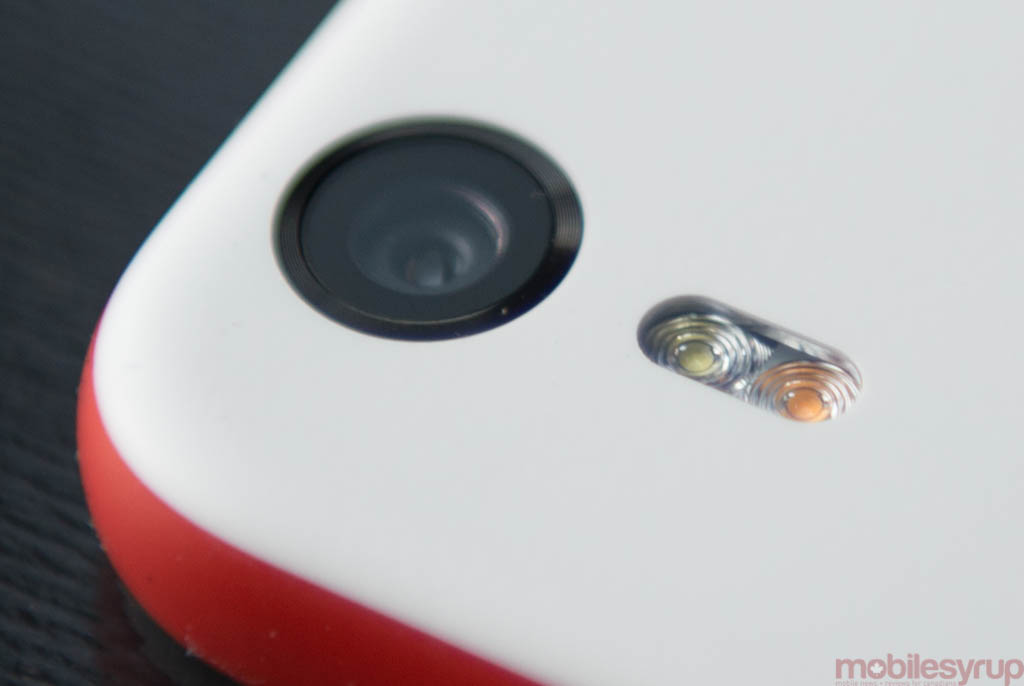 Indeed, with the Desire Eye, the line between Desire and One is now solely a materials thing (keeping in mind HTC wants us to forget the E8 ever existed).

The One line will continue to use premium materials like aluminum and stainless steel, while the Desire line, from the entry-level 2/3 series to the mid-range 5/6 line to the high-end 8 line and now Eye, track plastic. 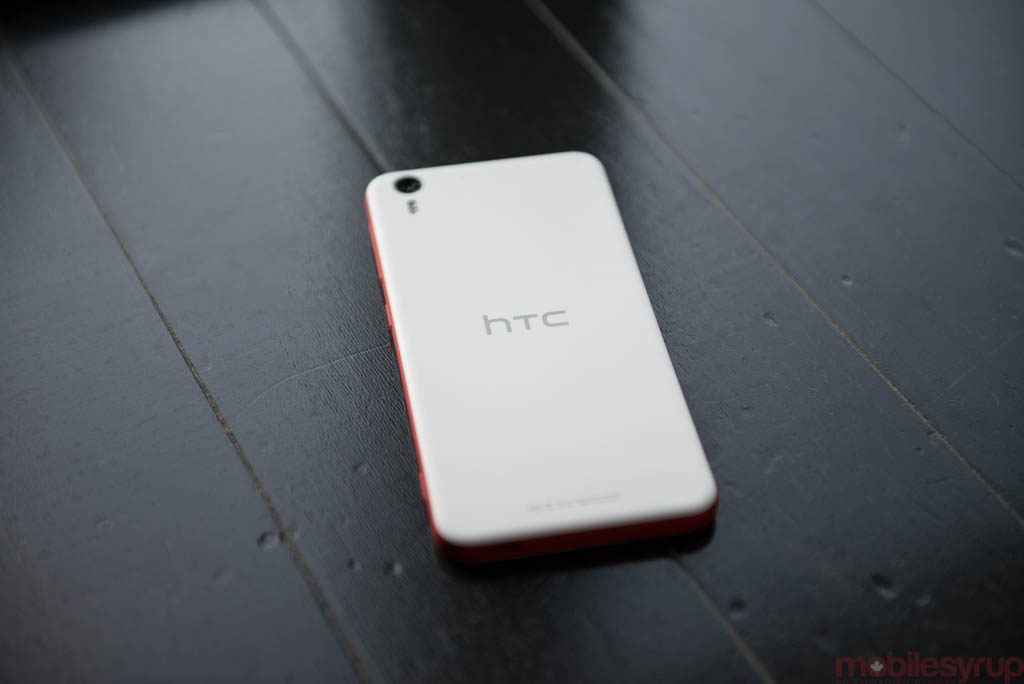 The Desire Eye, which will not be coming to Canada anytime soon, promises to have a simple proposition, according to HTC’s lead industrial designer Claude Zellweger: beautiful photos from the front and back, in any condition.

With a 2,400mAh battery, Android 4.4.4 and LTE bands suitable for Canada, the Desire Eye would likely do quite well on a carrier like Virgin Mobile. Unfortunately, as an AT&T exclusive for the time being, it doesn’t look like HTC is focusing on North America as its breadwinner for this device, which is a shame.

We noticed few software tweaks from the current Android 4.4.3 build on the HTC One M8, though BlinkFeed appears to have been spruced up, and apps like Dialer and Messages have a new Material Design-inspired coat of paint. 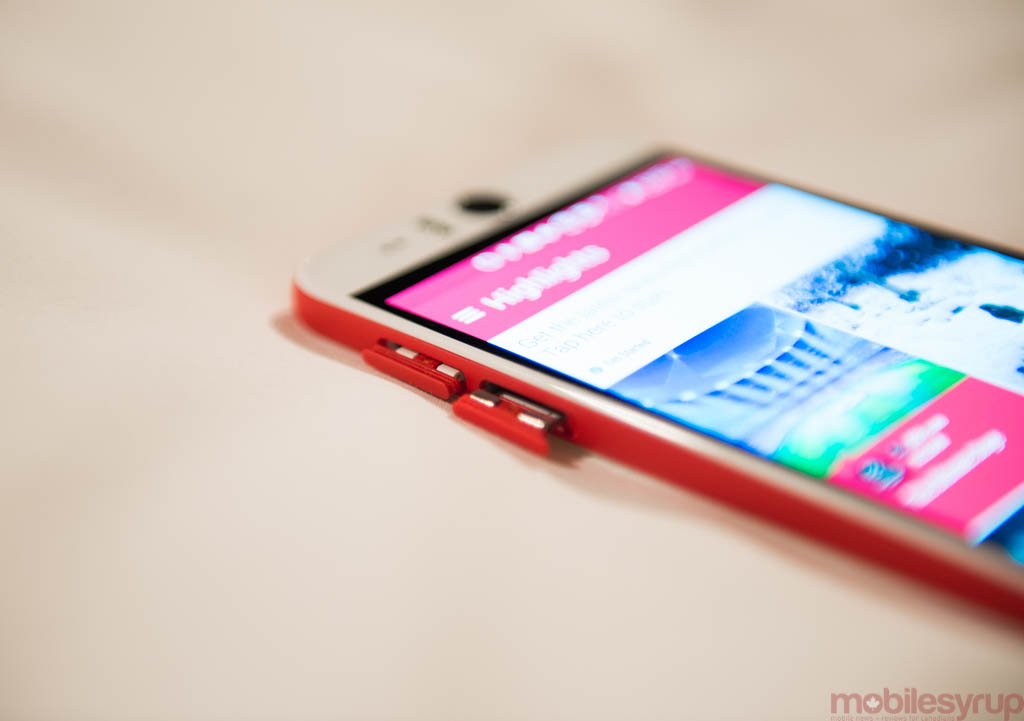 The Desire Eye is an intriguing example of what happens when the market pushes OEMs to an impossible place, to continually innovate while driving down costs. HTC’s position in that market, at once nimble design upstart and lamentable underdog, forces them to make sacrifices — like using a relatively underwhelming 13MP camera sensor — to drive margins, but those decisions also lead to unique devices like this one.

There is some good news in this story, though: all those HTC Eye Experience features seen above will come to the One M8 through a future software update, so consider this both a hardware and software preview.

While the HTC Desire Eye is not coming to Canada in the near future, we’ll keep you updated on the product as it becomes available in other regions in the hope that HTC will reverse its decision.