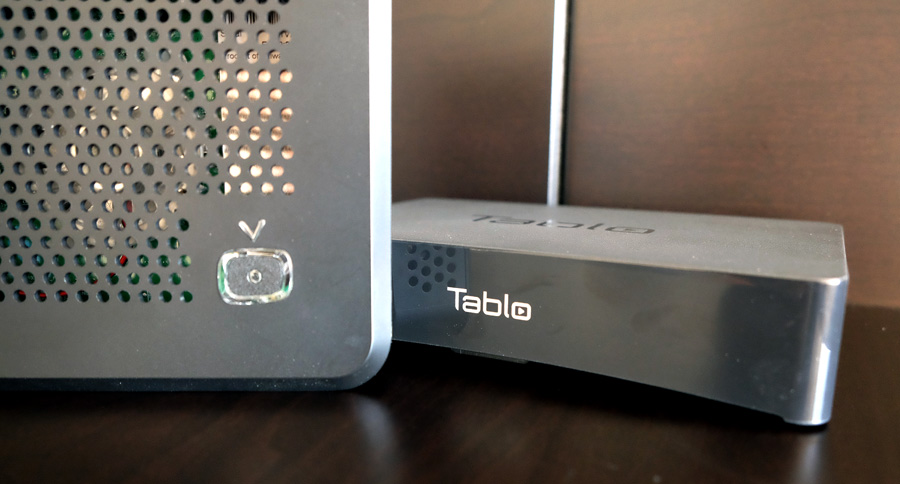 Consumer enmity towards cable and satellite subscriptions, coupled with the growing influence of online video streaming, has made cord-cutting a burgeoning trend. Over-the-air (OTA) TV broadcasts continue to be free, and there is a bevy of content available through those channels that can be streamed to smartphones and tablets. Two particular devices, Ottawa-based Nuvyyo’s Tablo and the Simple.TV 2, are set top boxes that essentially offer the same features, including PVR capabilities, though differ considerably in certain aspects of performance.

The whole concept of cord-cutting is about money and access. The old model of subscribing to hundreds of channels to gain access to the dozen or so you actually watch is arguably broken beyond repair, leaving a vacuum that is being filled by services like Netflix. The Tablo and Simple.TV 2 are designed to complement that by basically taking a live TV signal from a digital antenna and streaming it around the home, and remotely.

Watching a movie or show on a smartphone or tablet through Netflix is easy enough, so why not include the convenience of watching live TV or recorded shows on the same device? I certainly did, and here’s how these two devices match up. 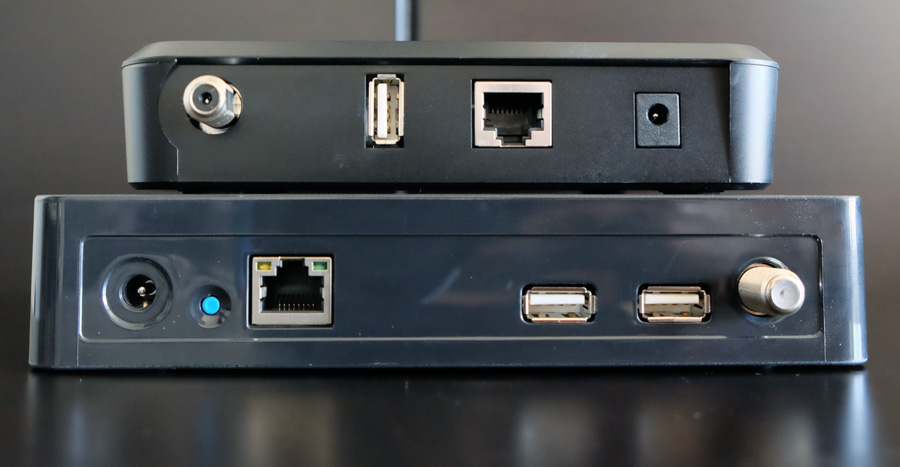 Neither the Tablo nor the Simple.TV 2 are complicated in that there isn’t much to unboxing them, nor anything really to assemble. They each come with power adapters, Ethernet cables and a quick start guide.

The Simple.TV 2 is smaller, shorter and lighter than the Tablo with a grill at the top exposing some of the internal components. This proves to be a bit problematic, which I’ll get to a bit later. Both are still small in stature with the Tablo about the size of two Apple TV 3s side-by-side. On the back, they are also about the same — a coaxial input, Ethernet and USB ports and reset buttons to go with the power input. The one difference is that the Tablo has a second USB port that effectively gives the unit dual-tuner PVR functionality (there is also a four-tuner model). The Tablo also has Wi-Fi built-in (Wireless-N, not AC), which is something its competitor doesn’t.

The irony in setting up either unit is that neither actually needs to connect to your TV, nor is there a need for a remote. The digital ATSC antenna goes straight into the coaxial input, which is actually ideal because it means you can set it all up where it’s most optimal for the antenna. Even if your main TV is in the living room, you could set it up in the bedroom where line-of-sight to incoming signals is clearer.

Despite there being no Wi-Fi on the Simple.TV 2, a wired connection in another room can be done using a powerline adapter or Wi-Fi bridge. In fact, I preferred to do that with the Tablo, too, since a wired setup decreases latency and helps ensure smoother recording. 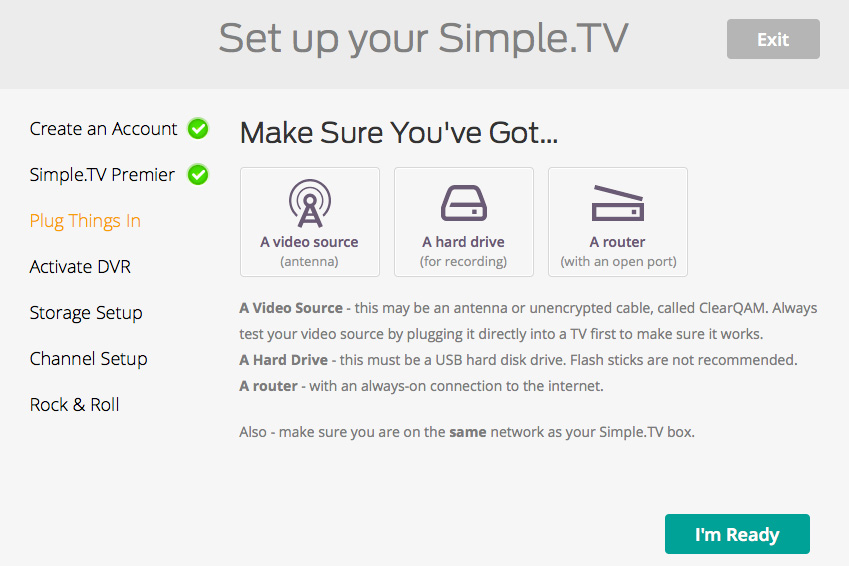 They can be set up using their respective tablet apps (iOS and Android) or through a browser on a computer (except Firefox doesn’t seem to work with the Simple.TV 2). I had a smoother time getting the Tablo going than I did Simple.TV 2, which seems to be more sensitive to the actual order of instructions. In other words, my haste to plug it in right off the bat seemed to confuse the process, forcing me to unplug it and start over again to have it up and running.

In either case, setup isn’t long or even tedious. Upon scanning and pulling in the channels — CBC, CTV, CityTV, Global, and whatever regional and American networks it can catch — it then goes to work aggregating all the content they have scheduled over the next 14 days. Similar to how other online streaming services work, the visual layout helps you identify shows and movies with names and artwork, not necessarily the channels or times they air on. Tap a show or movie and you can see the scheduled time, though this won’t matter much when it comes to recording — something I’ll touch on a bit further down. 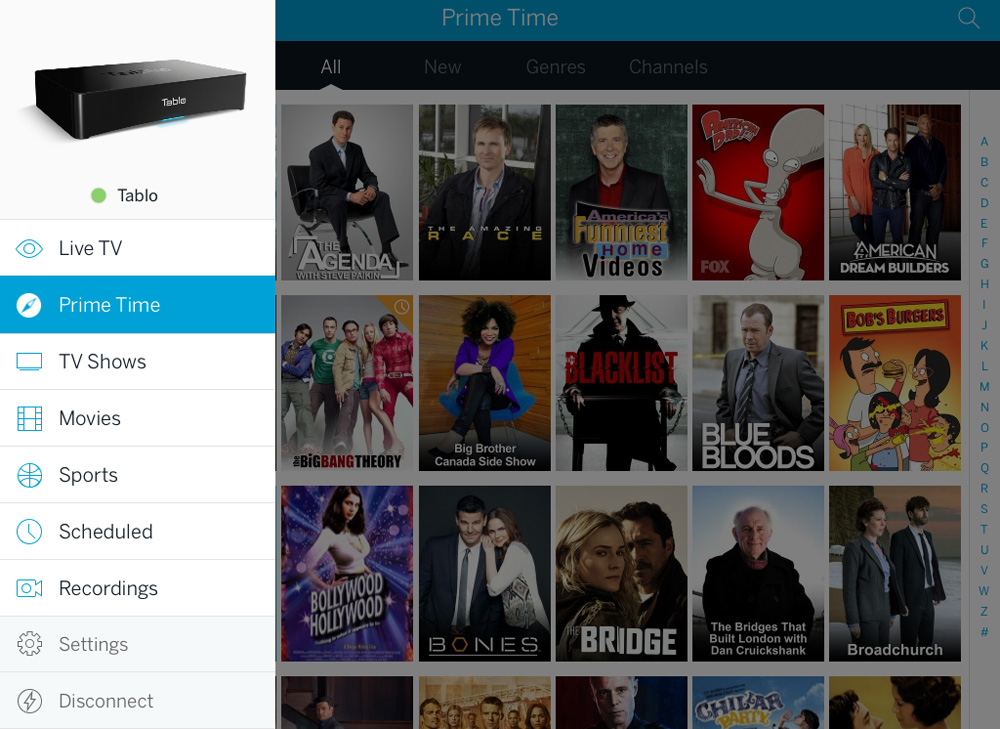 The PVR functionality is one of the key features to both boxes, though neither has built-in internal storage, relying on external hard drives plugged into their respective USB ports in the back to store recorded content. The BYO or “bring your own” storage leaves it to you to get a drive to handle the content you want to record. In either case, the connected drive has to be formatted to work with the respective units, meaning that you can’t just plug in a drive that already has existing content on it, unless you’re fine with overwriting it. Just the same, you can’t record to that drive and then playback that content on a computer or other set top box, like a Roku, for example.

Tablo’s two USB ports are limited to reading up to 2TB in capacity each. It can also only support one at a time, so there is no way to overlap from one to another, or to choose which connected drive a recorded show should go to. Nuvyyo has indicated it’s working on a firmware update to unlock dual-drive support, but there’s no word on when that will actually happen. 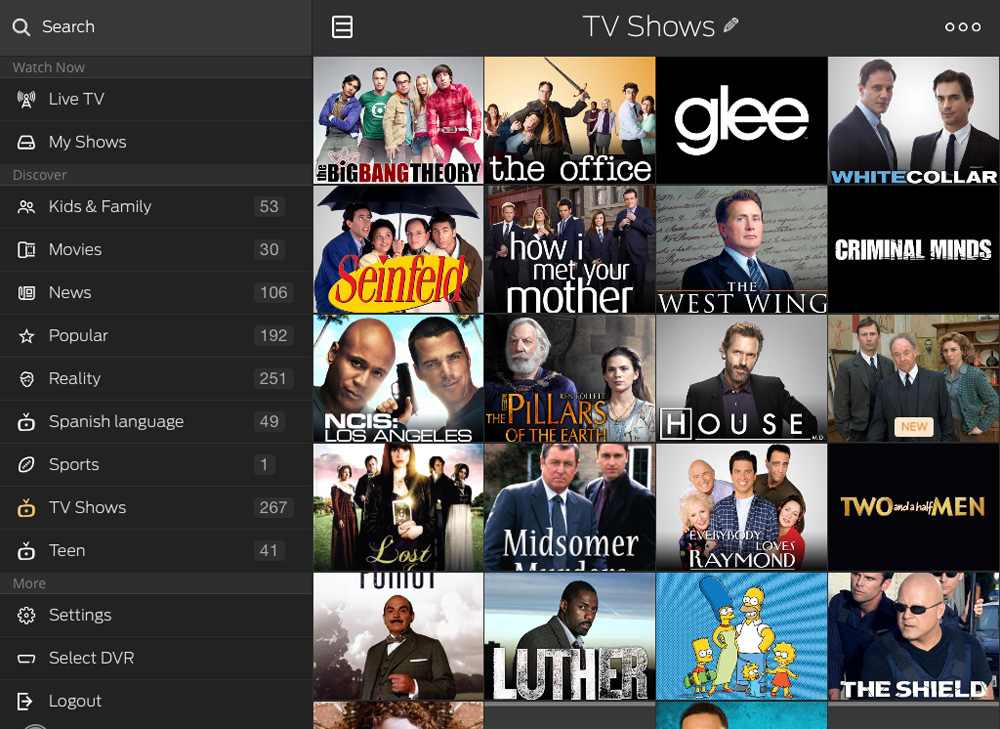 The Simple.TV 2 also has two tuners, with just one USB port. The extra tuner makes it possible to watch one show while recording another, or multiple users can watch the same live TV channel simultaneously. The USB port doesn’t appear to have the same storage limitation, at least on paper, but in practice, a drive larger than 2TB may still not work properly.

Given that the channels are in HD, recording quality is already high by default. On average, each hour amounted to between 2-4GB, though quality settings can be toggled in the settings of either unit’s app or via a browser. You can choose to record a show by episode or for a full season, the latter of which you would have to pay for via subscription. 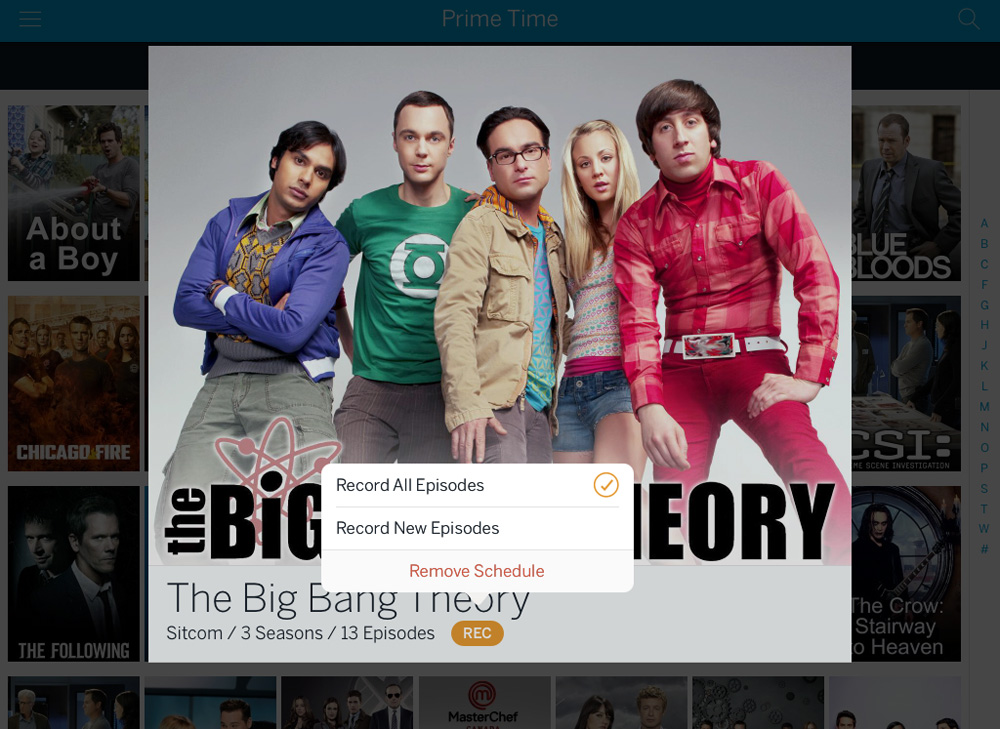 Streaming at home, and on the go

The Tablo has dedicated apps for the iPad and Android tablets, but not for smartphones, nor for BlackBerry or Windows Phone. The box, recorded shows and your account are still accessible through an HTML5 Web browser on any of those devices, but it’s puzzling that Nuvyyo wouldn’t develop iPhone and Android phone apps, at the very least. On the tablet side, compatibility is also limited to Android devices with screens 7-inches or larger, and running Android 4.1 Jelly Bean or later. It also runs on Amazon’s Kindle Fire tablets.

Streaming at home can also be managed through the Roku, Roku Streaming Stick, Chromecast and Apple TV, via AirPlay from an iPad. I was also able to stream from a laptop using AirParrot, and use a dedicated Plex channel that wasn’t developed by Nuvyyo. Naturally, PCs and Macs are fully supported, with Chrome edging out the others as the best browser experience.

In contrast, Simple.TV has dedicated smartphone apps for iOS, Android and Windows Phone, along with tablet versions for the same platforms, plus the Kindle Fire. There is browser-based support as well, much like how Tablo does it, except it won’t work with Internet Explorer. Support for Roku, Chromecast, Apple TV and Plex are pretty much the same, too.

Remote streaming video quality on the Tablo (what is called “Tablo Connect”) ranged from 500kbps to 4Mbps (or “full quality” beyond that). The “automatic” mode is greyed out because Nuvyyo hasn’t enabled it yet, so I just settled on 1.5Mbps. Whether it was a good Wi-Fi connection or solid LTE and 3G, performance was fine, albeit a drain on a monthly data plan, just like any other high-quality video streaming app would be. Nuvyyo smartly included a 30-second fast-forward button to zip through commercials, and a 20-second rewind in case you need to go back a bit.

Despite consistently similar performance, Simple.TV oddly doesn’t have these options in its app settings. I wasn’t able to change streaming quality while watching at home or elsewhere, though I did notice the app would adjust on its own depending on the bandwidth I was working with.

Either way, streaming live TV was a drain on the battery. A full episode of Law and Order: SVU took about 15% of the charge on an iPad and Android tablet. I noted better battery life when watching a recorded program from the PVR.

Despite a better overall look and feel, Tablo’s lack of smartphone apps is a head-scratcher for me. If a user were to commute to work in the morning and wanted to catch the previous night’s episode of The Daily Show with Jon Stewart, he or she really shouldn’t have to go through a browser. Understandable if it was a BlackBerry or Windows Phone, where app support lags behind, but inexcusable for iOS and Android.

Simple.TV has an edge in that recorded shows can be downloaded to a mobile device, except it needs a computer as a go-between, meaning it effectively has to transfer twice. First to the computer and then to the tablet or phone, negating the timeliness and convenience such a feature is intended to offer.

Another gripe is that the Simple.TV box’s fan is far louder than the Tablo ever seems to manage. The Tablo worked quietly, no matter what I was throwing at it, whereas the Simple.TV unit would spin rapidly, even when it wasn’t actually in use. This discrepancy was even worse when the room was quiet. 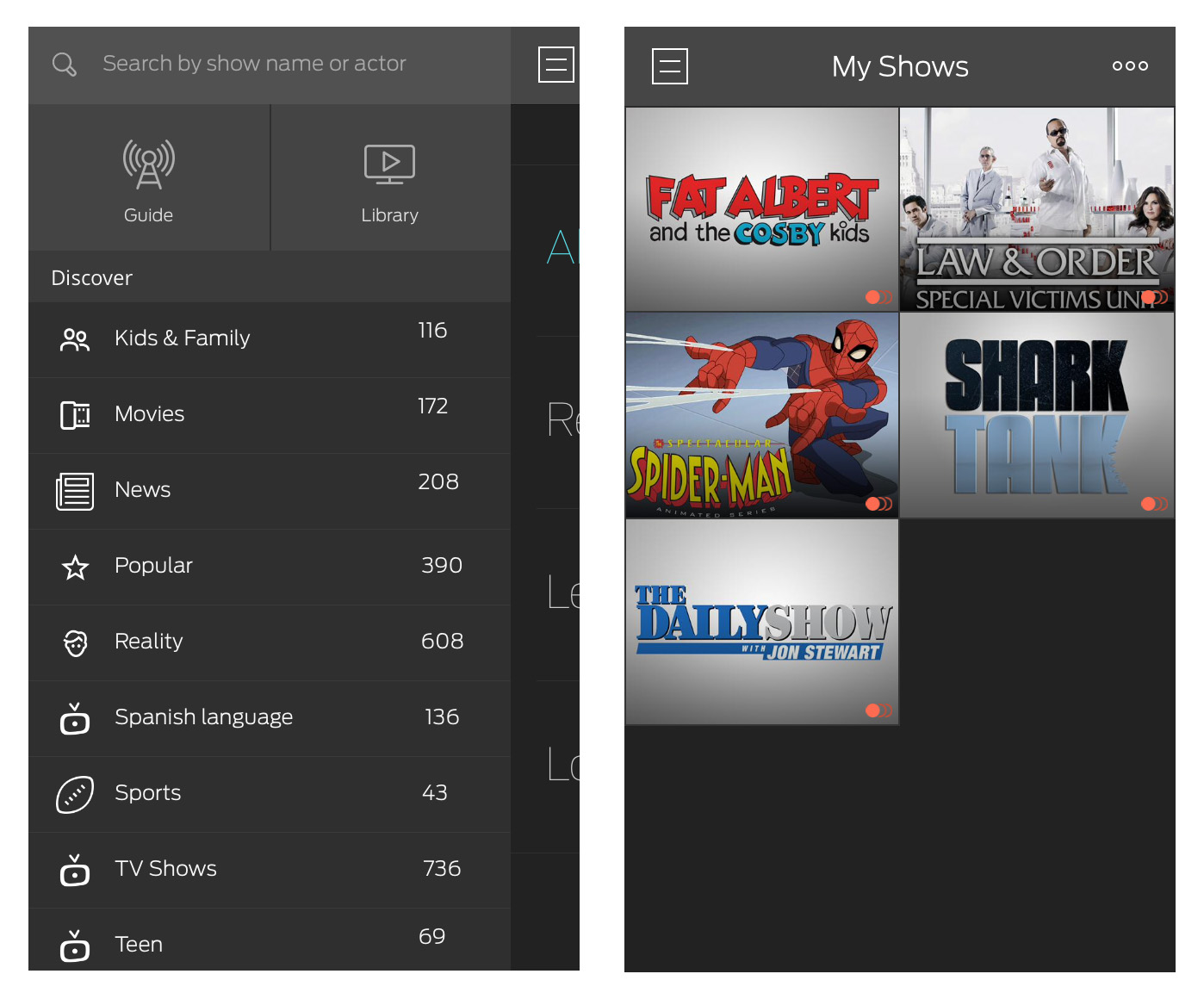 Both the Tablo and Simple.TV 2 have free and premium services, and each offers a 30-day trial to get used to them. What it boils down to is that subscribing beyond the trial keeps the door open to remote access viewing and recording, along with a detailed 14-day programming guide. Without a subscription, you’re limited to only recording what you’re watching and having no guide to schedule anything else.

A Tablo subscription costs either $5 per month, $50 per year or $150 lifetime. Simple.TV doesn’t offer a monthly subscription, instead charging $60 for an annual one, or $150 for life. 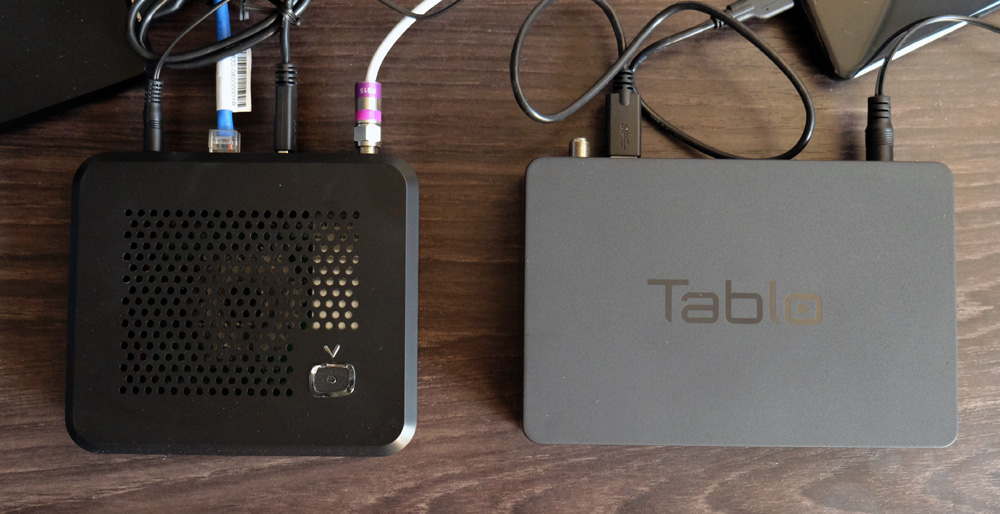 Both Nuvyyo and Simple.TV extol the virtue of their devices as cord-cutting tools, and in many respects, they are. I’ve never experienced quite the same freedom and convenience in watching free OTA TV, especially when I don’t have to actually be tethered to a TV. The Tablo can handle up to six simultaneous streams, while the Simple.TV can handle up to five. That’s impressive.

On the other hand, the price of entry for both is actually higher than their respective prices. The Tablo is $250 for the two-tuner version and $330 for the four-tuner model, whereas the Simple.TV 2 is $230, or $270 direct from the company with a one-year Premier subscription thrown in. Unless you already have them lying around, adding the cost of an external hard drive, plus a digital antenna, can easily raise the cost of entry above $400.

That’s a fairly expensive upfront proposition for products that are intended to save money. Ultimately, they do help save money, just that the savings pay for themselves after a period of months. Coupled with Netflix and other online streaming solutions, the Canadian-made Tablo is the better choice between these two, though the gap between them isn’t very wide at the moment.