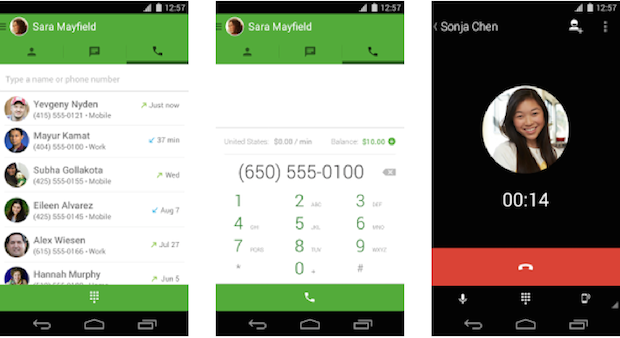 Google has announced an update to its Hangouts messaging application that will bring voice calling to the Android version of the app. Previously only available for iOS and desktop users, the announcement follows confirmation of Google’s plans to integrate Google Voice SMS and voicemail into Hangouts.

Hangouts users will be able to call each other for free, while calls to the US and Canada mobile and landline numbers are also free of charge. As part of today’s announcement Google is also lowering its international calling rates for certain countries.

To make calls, users will need to install the Hangouts Dialler app as well as the new, updated version of Hangouts version 2.3. The most up to date version of the app until today was 2.1.317. If you want the update right away, you can always sideload the APK yourself. (It’s possible to download the Hangouts Dialler without installing the new version of Hangouts, but it won’t do anything. Attempts to launch it will prompt you to download Hangouts 2.3, and then you’ll be booted to the Google Play Store, which will tell you whether or not the update has been rolled out to your phone yet.)

What you’ll notice when you install (aside from the obvious calling functionality) is that Google has also overhauled the Hangouts design to bring it more in line with Android L’s Material design. It’s a bit more cluttered, given Google has to squeeze an extra tab for the calling feature, and it adds a lot of green that wasn’t there before. Whether it’s an improvement is personal preference.