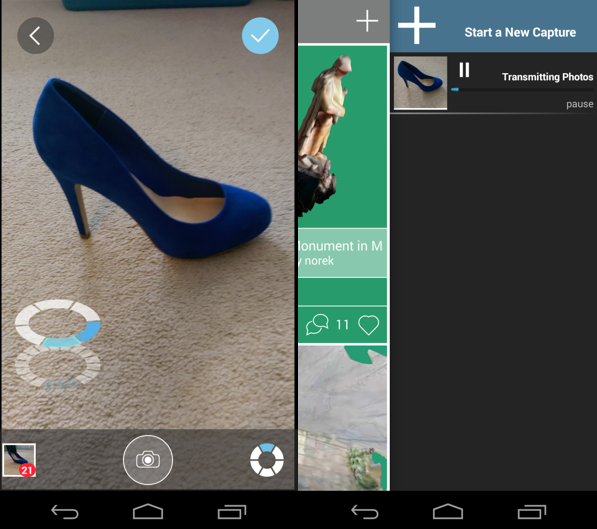 Autodesk has announced the long awaited arrival of 123D Catch for Android. The app has been available for iOS, Mac, and PC since 2012, and Autodesk said today that it has had ‘overwhelming requests from Android users’ to bring the 3D modelling application to Google’s mobile operating system.

123D Catch was originally launched in 2011 and allows users to take photos of people, places, or thing and turn them into 3D models, called ‘Captures’. In the Android version, the user captures an object or person from multiple angles using their device’s camera and a built in Photo Compass. The resulting interactive photo can then be shared with friends over social networks, or exported and used to create 3D models for printing.

The app is free to download right now. To process Captures, you’ll need to register an account with Autodesk (email and password required for registration). Once that’s done, the app will give you points on how to take the best Captures. Your images are then processed and combined for form a 3D model of your object.

The app says you can create models of people, but keep in mind that you’ll be taking between 20 and 40 photos of your subject, so human subjects will need to remain very still throughout the process.

The launch of 123D Catch for Android comes just a couple of weeks after Autodesk’s release of a brand new version of Pixlr for OS X and Windows. This brings the popular mobile tool to desktops and Autodesk promises these versions are also optimized for tablets.