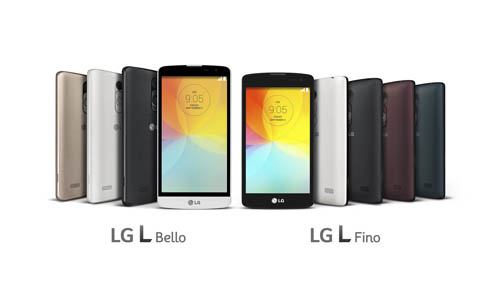 LG recently announced plans to bring the G3 UX to all of its mid-range and high-end smartphones released in the second half of this year. Just a few days on from that announcement, the company is announcing two new mid-range smartphones as part of its L series of budget phones. The last L-series phones we saw were the L40, L70 and L90 back in February.

Both devices feature same rear buttons for volume and unlock as the flagship LG G3 and are compatible with the LG’s QuickCircle cases. They ship with 4.4.2 KitKat and, true to LG’s word, some of the same customizations we saw on the G3 when it launched earlier this year. These include Touch & Shoot and Gesture Shot in the camera app, and Knock Code for unlocking the device.

LG plans to show off both the L Bello and L Fino at IFA in Berlin next month, and is targeting 3G markets and young people with these budget phones. Unfortunately, the company has yet to spill the beans on pricing, which is the most important aspect of a device that compromises on specs in order to be more affordable.