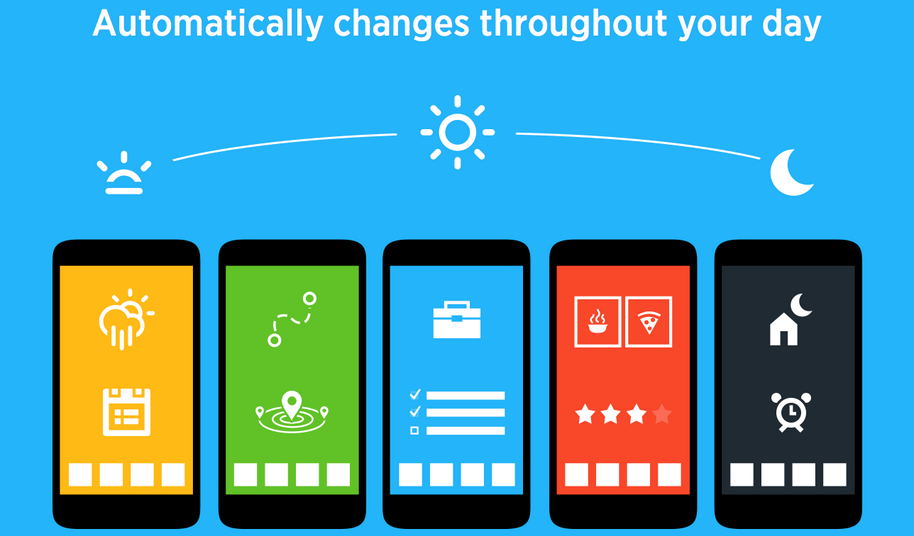 There’s something exciting about picking up the same old phone you’ve used for months, perhaps years, and seeing something entirely different and useful upon unlocking.

For a long time, Android launchers have been the means to accomplish such transformations, but it’s only in the past year or so that developers have been able to translate that traditional grid of app icons and widgets into something more useful. Aviate, which launched in invite-only alpha last year, offered users a way to make sense of a smartphone’s many secondary bits of knowledge: location; time; people.

By deemphasizing the traditional app grid, Aviate exposes space on the home screen that tends to get eaten by icons that are seldom used. It uses location and time as jumping-off points for various profiles, so the information seen at 7am is vastly different to that of 12pm and 9pm.

The company had been quiet since January, when it was purchased by Yahoo to diversify its Android portfolio and promote its previously-diminished presence on Google’s platform, but just before I/O last week launched a brand new version, replete with Yahoo branding, and lots of improvements.

I had a chance to speak with one of Aviate’s three founders, Mark Daiss, during the conference, who told me that the team is now well-integrated into Yahoo and is working with a few of their other acquisitions to further data acquisition. “Our team is now 30, compared with seven when we started [a year ago],” he said.

While the team has grown, as has the app’s scope, Daiss’s goal for Aviate remains the same: “It’s supposed to be simple.” But it takes a lot of hard, complicated work to create something that is both simple and functional.

“Users care more about the information in apps rather than the apps themselves,” pointing to the growing number that are installed and abandoned because users tend to find one that’s good and stick with it. Aviate’s three main home screens provide enough detailed information to negate having to too frequently open many apps. For example, when settled at a new place, Aviate will detect it by name and prompt you to check-in via Foursquare. When a new app is downloaded, it is automatically placed into a different category such as Music or Productivity.

When Aviate was acquired by Yahoo, it posted this as its mandate: “We envision homescreens becoming smarter, more personalized, aware of your context. Aviate helps us bring this vision to life. Aviate auto-categorizes apps on your Android phone and intelligently gathers them into ‘spaces.’ By using signals to understand your context – WIFI, GPS, Accelerometer, Time, etc – Aviate automatically surfaces information at the moment it’s useful. So whether you’re just waking up, driving, at work, or maybe out for the night, Aviate learns your habits and helps anticipate the information and apps you need – making your phone smarter.” 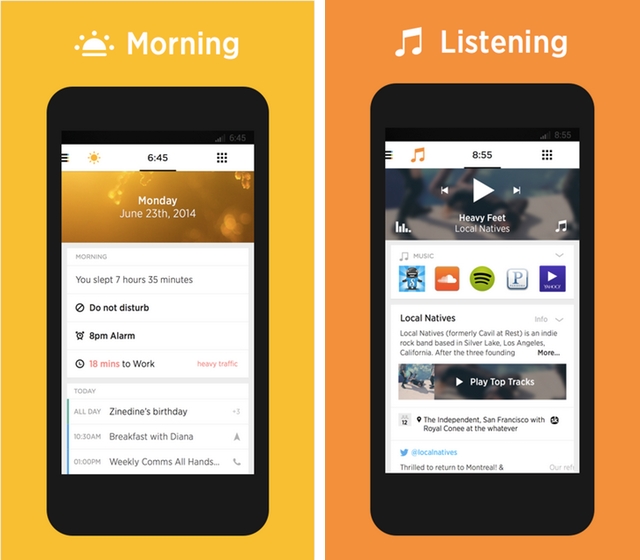 With the new version released last week, Aviate is one step closer to that ultimate goal. Over the past six months, the team, while growing, listened to user feedback and added three features that were frequently requested: Favourite people, accessed from a swipe up at the home screen; calendar support, including business features like direct conference call dialling; and “delights” such as sleep tracking, daily Flickr images, storm alerts and built-in support for Yahoo Daily Digest.

“We know that people will love Aviate once they stick with it,” said Daiss, noting that the team asks users to trial the launcher for seven days before giving up. “It’s a very different experience,” he notes, arguing it’s the change that is needed from Google’s stock launcher and its many iterations. Launchers like Aviate also give Android users the opportunity to switch away from those ugly, often-restrictive ones installed by OEMs and carriers.

“The biggest problem is teaching people that Android supports custom launchers,” he said, though awareness is growing among mainstream users. Yahoo is not the only company to have waded into the custom launcher game, either. Earlier this year, Twitter acquired Cover, a context-aware lock screen replacement, and Facebook experimented with its own Home launcher, which has reportedly been killed.

Still, launchers are big business, as successful paid replacements like Nova and Apex have shown over the years. And free alternatives such as GO Launcher and even Aviate see the home screen as a way to provide not only context but recommendations. Aviate, for instance, works with advertisers to “suggest” apps in certain app spaces like Music and Transportation, though it’s unclear how much the company has brought in to date with that mechanism.

Aviate’s growth also points to another important fact: Yahoo is finally taking Android seriously. After letting Flickr, Weather and many other apps flounder while its iOS ecosystem flourished, Yahoo has sought to make up the difference, revamping the aforementioned services to feature parity with their iPhone and iPad counterparts. Indeed, it appears that Aviate was waiting until Yahoo News Digest was released for Android before rolling out publicly.

It remains to be seen whether Aviate’s low-density, context-heavy interaction paradigm will catch on with users en masse, but its acquisition by Yahoo points to the fact that Android’s biggest differentiator, its customizability, is finally being seen as a revenue generator.