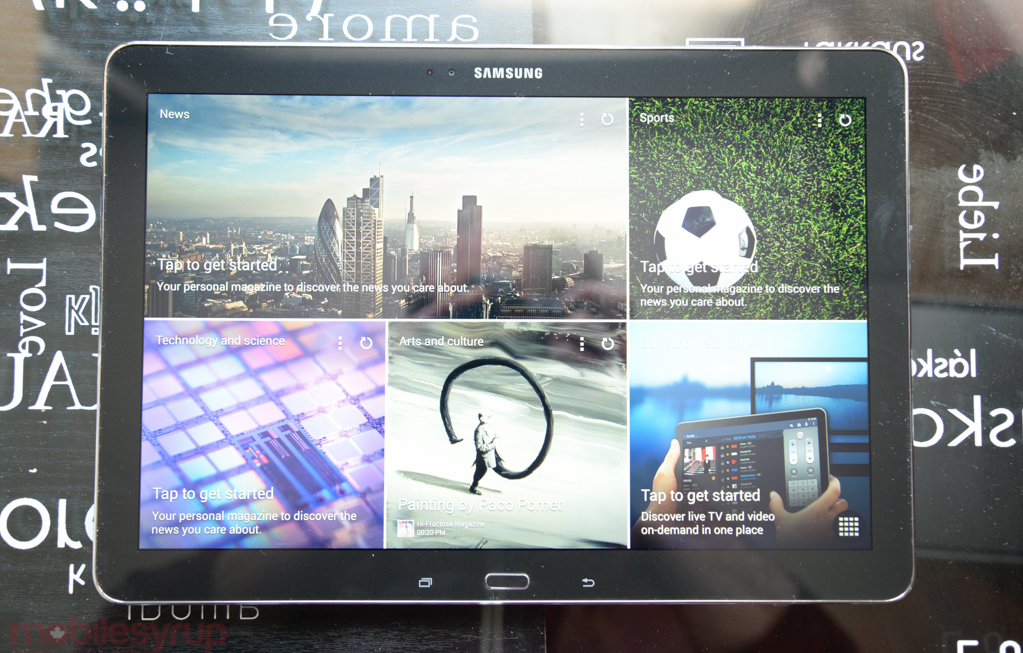 There were moments during my two-week period with the Samsung Galaxy NotePRO 12.2, the biggest and most expensive tablet on the market, when I thought, “Huh, this could probably replace my laptop.” What do I use my laptop for? Browsing the internet; playing music; taking notes; writing blog posts; playing games. Samsung’s newest tablet is generous on features and pre-installed productivity software; it could just work.

But the Galaxy NotePRO 12.2 is no laptop replacement, even with a Bluetooth keyboard and mouse. That’s because the company is trying to wedge Android’s open nature into a multitasking paradigm that it wasn’t designed for. It’s a good tablet, and an OK laptop, but at $769, it’s more expensive than either has a right to be these days.

The NotePRO 12.2 bucks the trend of commodification rife in the tablet industry these days: this is a device meant to be used for many years, and conveys an air of seriousness. Whether it hits that mark, with its $769 price tag and enormous screen real estate, depends on its use case. As a portable tablet, the NotePRO is impractical, even a burden. On paper, those extra 2.1 inches don’t sound like a lot, but the device is significantly larger than its 10.1-inch counterpart, and feels better on a table than in a bag.

That being said, at 750 grams, it’s relatively light for its size, and under 8mm it doesn’t take up too much room. Indeed, it’s a matter of your workflow: is the NotePRO a primary device — a laptop replacement — or a secondary one, like many tablets are today?

Though the NotePRO comes with a number of productivity apps, like Hancom Office, Samsung’s own e-Meeting software, and a Remote PC application, to close the gap between Android and Windows or OS X, it doesn’t feel good enough. Multi Window, Samsung’s still-superior multitasking solution, has also been expanded here to four apps, many of which can transfer content between them, but it still feels like a hack, a stopgap until Android becomes even more extensible. Samsung is pushing Android hardware and software to its absolute limits here, and if there’s something to be achieved on Android, be it in content creation or consumption, rest assured the NotePRO 12.2 will do it better than most. 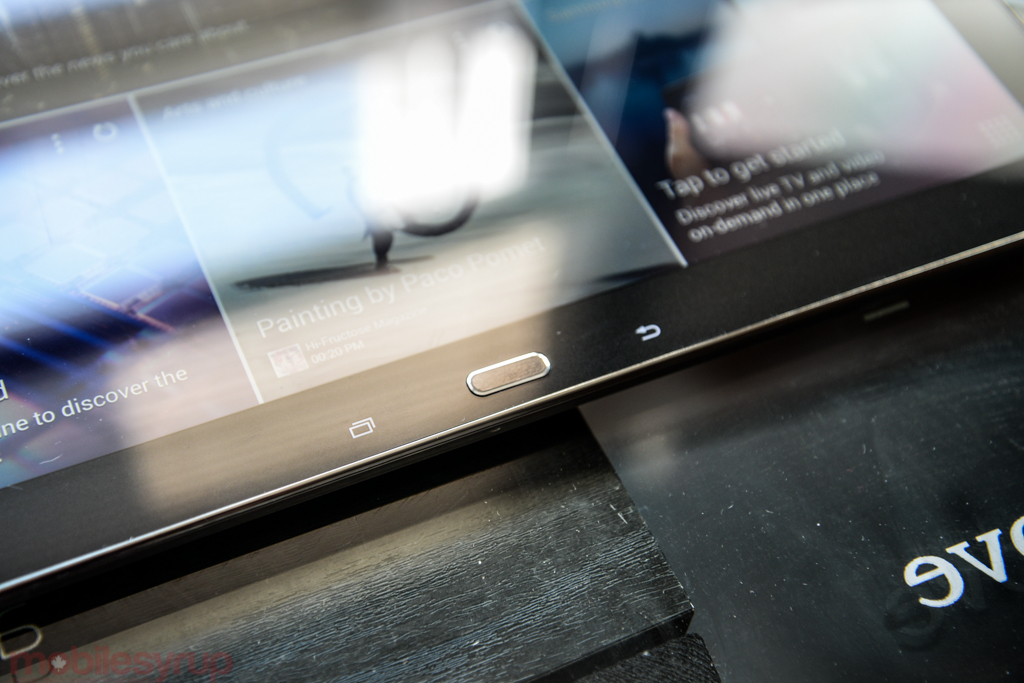 Many of the improvements are holdovers from the Galaxy Note 10.1 2014 Edition, which has since been replaced with the TabPRO 10.1. The hardware still sports horizontal-oriented hardware buttons, which make more sense here than on a smaller device, since using the NotePRO 12.2 in portrait mode is a recipe for comedy.

The hardware, as stated, complements the software quite nicely. Though still of plastic construction, the NotePRO feels much more sturdy than Samsung tablets of past, and we’re finally coming around to Samsung’s choice of faux-leather materials on the back. On the sides, a ribbed, glossy plastic reminds us that the company is still cutting costs — the beautiful Xperia Z tablet this is not — but it’s slowly improving.

The S Pen is the best thing to happen to a tablet this size, and may singlehandedly justify the price increase from the TabPRO 12.2 (which happens to be an even $100).

With so much screen real estate — and the high-resolution panel truly shines here, even with a slightly lower pixel density — creators have a truly blank canvas to work with. Samsung hasn’t messed with a good thing, either: S Note still integrates with Evernote, and there are myriad ways to draw, paint, note-take and scribble. Samsung finally seems to be getting a grip on good software design, and along with improvements to its TouchWIZ UI as a whole — the drop-down notification menu is much more tasteful, for example — its first-party apps are not just usable but pretty. 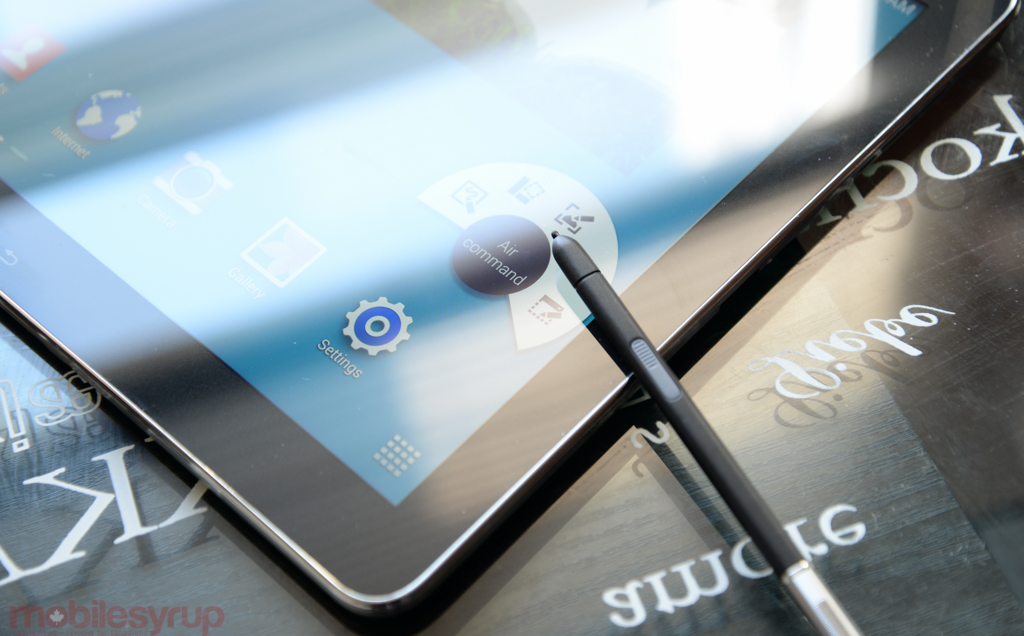 For a device this powerful — it has a modern Exynos processor, the latest radio chips with support for WiFi-ac MIMO, 3GB of RAM, and the latest version of Android — the NotePRO is clunky.

It seems like Samsung still can’t remove the cruft from its Android skin, as screen transitions, app loading times, and various menial tasks still stutter and fault. It’s not as bad as it was in the Galaxy Note 10.1 2014 Edition but it’s still present, and there’s no excuse for that. The 9,500mAh battery, while enormous, does not exceed the uptime of its smaller counterparts, partially owing to the massive number of pixels but also due to Samsung’s constantly-updating software features. 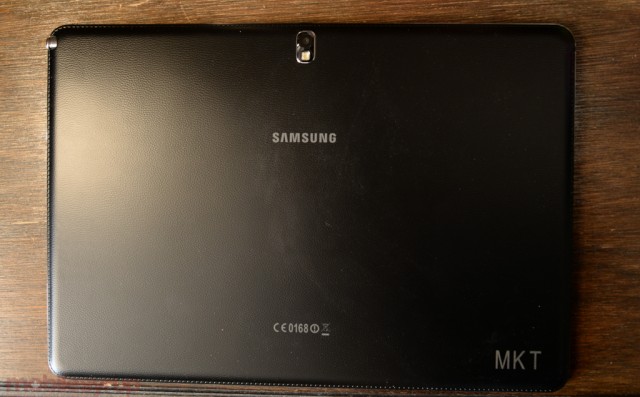 To that end, TouchWIZ has a new suffix: Magazine UX. It’s not an entirely new feature, but instead of being accessible from a vertical swipe on the homescreen, a la Note 3, it’s integrated into the launcher itself.

Combining a number of large-area Flipboard widgets divided by category, like News, Sports, Technology and Science and Arts and Culture with productivity widgets that reproduce calendar and time information is pretty, but not especially useful. Google reportedly pushed back at Samsung when they saw the first Magazine UX prototypes and convinced the Korean company to default to a more traditional Android home screen, relegating the widgets to a horizontal scroll, and we’re glad they did.

Samsung also provides a number of value-adds to its consumers, including free trials of BusinessWeek magazine, Evernote, New York Times, LinkedIn, Dropbox, Sketchbook, Blurb and more, but many of them are too short to be useful. There’s also the matter of the upfront price of the tablet being far too high for the average consumer, though it’s clear that Samsung, which is offering an optional Bluetooth keyboard and mouse, is gunning for the enterprise customer with this particular model. 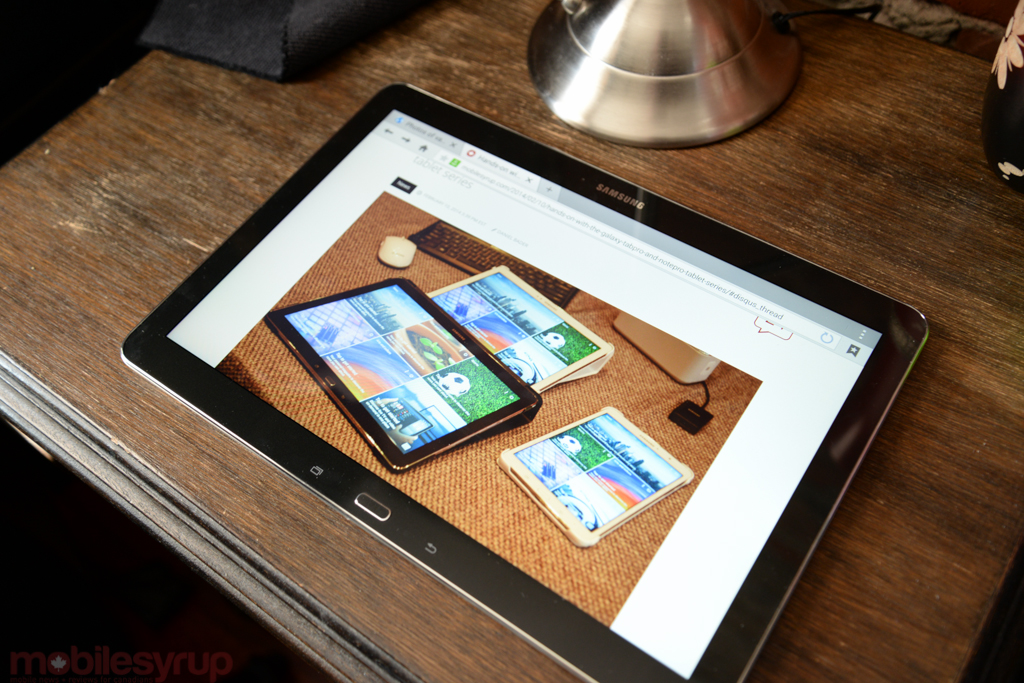 As useful as the Samsung Galaxy NotePRO 12.2 has the potential to be, it’s too big, too clunky and too expensive to be a viable purchase for the average consumer. As the company’s flagship tablet, it’s a beautiful technology demo, showcasing many of the hardware and software advantages that entice consumers to return again and again.

But given that the S Pen-free TabPRO 10.1 is $519.99 and offers largely the same specs in a more compact form factor (not to mention the superlatively sharp TabPRO 8.4, which costs a more reasonable $419.99), that average consumer may still stay in Samsung’s camp, and that’s a win for the company.

I’d love to see Samsung continue to offer a 12.2-inch tablet in the future while eliminating any excess size and weight — cutting those bezels down and thinning it out slightly — but the mere size of the screen will continue to put off many tablet buyers, even those with large budgets.