Talon for Android wants to steal the third-party Twitter crown 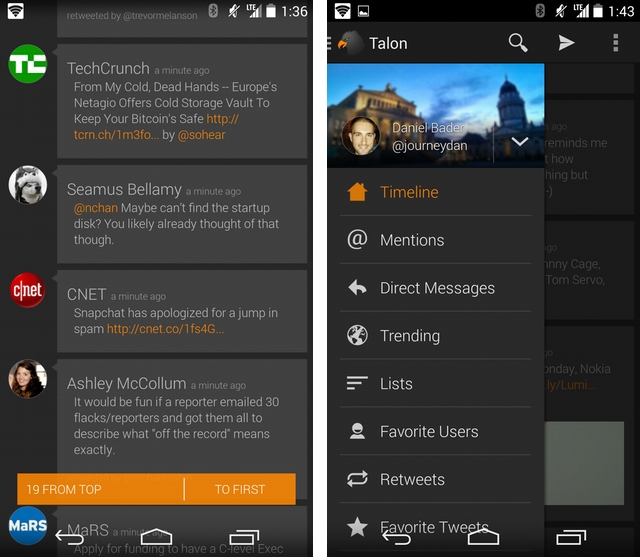 There’s a new challenger in the third-party Twitter app ecosystem and this one, Talon, is from popular Android developer, Luke Klinker.

Klinker made a name in mid-2013 with Sliding Messaging, an intuitive SMS replacement that iterated quickly, adapting to Google’s Cards-based design guidelines before most developers knew what they entailed. Now, his company is back with two apps (the other, Evolve SMS, we’ll talk about soon), one of which is a paid Twitter app called Talon.

With Falcon more or less out of commission after running up again Twitter’s token limit, Talon is primed to attract early adopters, especially the 1.4% of users running Android 4.4 KitKat. The app takes advantage of the operating system’s new fullscreen APIs, which allow the app to extend past the menu UI at the top and bottom of the screen. Even without these advantages, Talon is well-designed, with smooth scrolling and easy navigation — swiping between timelines and a left-side hamburger bar for quick access to lesser-used areas like Lists, Favourites and Trending Topics. 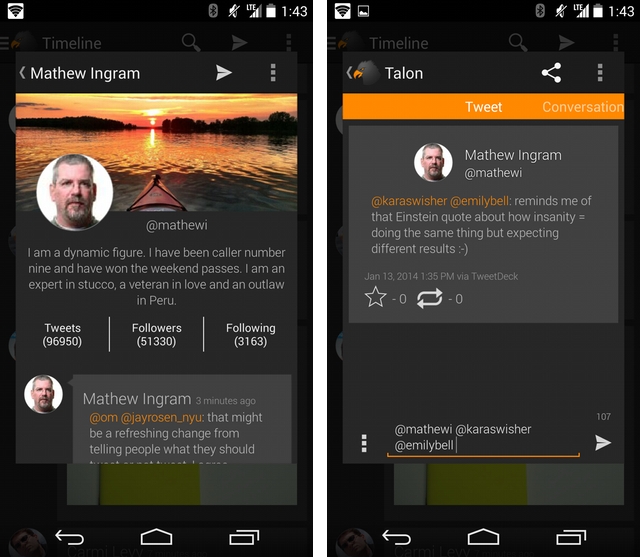 Klinker also developed a service called “Talon Pull” that uses Twitter’s Streaming API to “simulate push notification functionality.” While Falcon and Plume both boast a similar claim, Talon Pull ostensibly uses less battery, and features a right-side Interactions Drawer. Traditionally, third-party Twitter app developers have limited streaming to WiFi, since it keeps a data connection open at all times, but Talon’s developers seem to have found a way minimize power consumption; after six hours of use, the app barely registered in my battery usage stats.

With dual-account support, a native tablet interface, excellent in-line images, a built-in browser, a “pop-out” mode to use the app on top of another (accessed via the notification bar), and lots of other features, there is a lot of potential here.

The app is not perfect, though: there are a number of outstanding bugs, incomplete features and spelling mistakes. But, once fixed, Talon promises to be a serious contender for the best Twitter app on Android and, potentially, the closest thing to “Tweetbot for Android” that platform users have been waiting for.