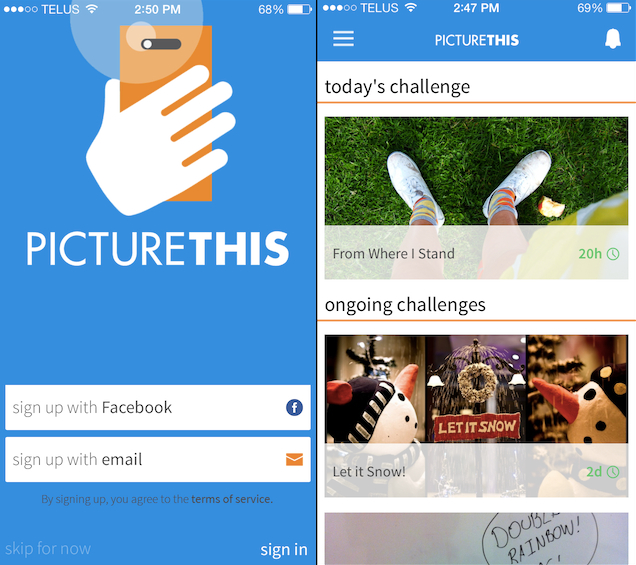 Update: Dandy has updated the Picture This app and made it available for Android devices. It works for those running OS 4.0 and higher. In addition, the company also stated that have opened up a beta program that aims to “change the way you experience events of all sizes; from small gatherings to huge festivals.” Download the app here via Google Play.

Waterloo’s very own Dandy takes an interesting approach to mobile app development: they crowdsource it. Just a year old, the startup has fostered a community of helpful individuals to build the highest voted mobile app ideas, for a share of the revenues.

Today, Dandy releases their first crowd-sourced app, Picture This, across BlackBerry, Android, iOS, and Windows Phone. The app runs daily photo-based scavenger hunts and was built (natively!) on all four platforms in 60 days. I had a chance to sit to speak with Dandy’s cofounder and CEO, Matt Scobel, as well as the Dandy community member with the idea for the app, Niger Little-Poole, as they prep for a busy CES to get the word out.

MobileSyrup: What was impetus behind the decision to crowd-source app development?

Matt Scobel: The big thing for us was that myself and my two other co-founders always had a lot of app ideas, and we always found that the resources or the technical skill you need to actually build a successful app is pretty astronomical. As idea people, we were looking for a solution that would allow people to share their app ideas and have the best ideas be vetted and built by a community of people. The inspiration behind Dandy was to solve this crowdsourcing problem and mitigate the risk that’s inherent in building mobile apps among a larger group of people.

MS: That’s interesting that you bring up mitigating risk, because project management can be difficult for small teams sitting right beside each other. What were some of the technical, logistical or human problems around building an app this way?

Scobel: Yeah, it is tricky. If you look back in history, there’s been a lot of companies that have attempted to do the crowdsourcing thing for software and it can create a lot of challenges, not only from the coordination and project management, but also in keeping people interested in the process. You start out super excited about a project and then a couple weeks in something else catches your eye and it’s like shiny object syndrome.

For us, the first thing was to help facilitate the process and make sure there was one person – or company, in our case – responsible for getting the app out the door. Dandy takes on that responsibility: we are the coordinators, the project managers, the people that make sure these apps get built. From our standpoint, most of the development team that came together to work on this was fairly local within the Toronto/Waterloo area. We’re lucky because Waterloo has a great pool of technical talent, so that helped us a lot. It was just about setting a target and getting everyone excited about a deliverable and going from there.

“Too many ideas get stuck in people’s heads because they’re afraid to share them, and they die in there.”

MS: Niger, what compelled you to participate in a project like this? To not only submit an idea but be part of its development.

Niger Little-Poole: Well I had the idea before I saw Dandy on the Internet, and I do have some experience in app development, but I’m a full time student at Columbia. I knew I really didn’t have the time or the resources to really commit to developing the idea, so I figured it would be better to give up the idea and let somebody else take a crack at it and see how that went. And since Dandy ensure that the people who submit ideas to the community get a share of the revenue generated it’s no loss to me – I could keep this idea to myself and never develop it or I could share it with the community and take a certain percentage of it, and that seemed like a better idea at the time.

MS: Is there anything the community did that kind of surprised you? Maybe in terms of what they were willing to participate in or roles that were more difficult to fill than others?

Scobel: We really didn’t know what to expect and this was a bit of an experiment with the first app to see how it goes. With Niger, it was interesting because we told him at the beginning: you can do as much or as little as you want. If he wanted to submit the idea and never hear from us again, then that’s part of the process. If he wants to be in there every day working with us, then that just increases his share in the app. So I think Niger actually ended up submitting a tagline we’re using and some features we ended up using. So a lot of his ideas have been baked into this app. It couldn’t have gone better from our standpoint – we didn’t expect the user that submitted the idea would have a chance to work with us as closely as we are. It was a big surprise and really exciting for us.

Little-Poole: Even after my app was chosen to be developed, the team was really good about keeping me up to date in the process and asking for my feedback, so I’ve definitely been involved. But they asked me how much I wanted to be involved.

If I had another idea I think is really good and don’t want to commit to developing it, I’d submit on Dandy to see what the interest is like. But definitely with this I’ve been way more exposed to the process, so if there was an idea I’d really want to commit to doing myself, I have an idea of what goes into it and could begin to try to do it myself. 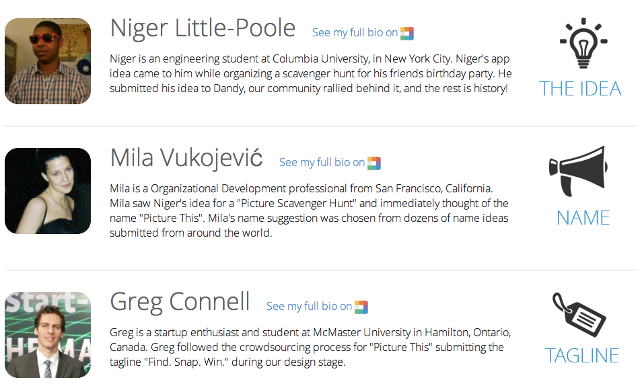 MS: It looks like you’re promoting the community behind the app as much as the app itself, so I’m wondering how important it was for Dandy to show that recognition.

Scobel: You guys cover a lot of apps, so you know: there’s over a million now on iOS. It’s hard to get attention and it’s hard for people to discover or see the cool project you’re working on, no matter how great the app. For us, what makes this very unique is the community we have behind it – when we’re here in Vegas, we introduce ourselves and then we introduce Niger and tell his story, people are instantly kinda excited about it. The bigger our community gets, the more active the users are, we think the better the apps will become, and the more people we bring along for this process just means the more people we have to help get us early traction and downloads when these apps hit the app store.

We had over 300 app ideas submitted for our 60 day challenge. There were a couple hundred people who were contributors overall to the app – and that could be as simple as going in and voting on the name of the app or making a comment and suggesting a feature. When you download the app, you’ll see a list of people who helped bring it to market.

MS: I think it’s really cool that the first app that the community chose was a community-focused app.

Scobel: That was important for us, too, because we wanted something that would be accessible to as many people as possible in our community. We had a lot of cool ideas submitted but they were focused on a specific vertical or issue. Picture This was the one idea we thought that literally anybody could pick up a phone and use.

MS: For prospective people that might be interested in joining the Dandy community, what’s the one thing you’d want them to know about the process?

Scobel: The cool thing about Dandy is that you can be involved as much as you want. We’re looking for people from all different walks of life and different skill sets: people with experience in marketing and branding, people that have done beta testing, developers, designers. Whatever your skill set is, if you want to contribute to building a mobile app, you can do that on Dandy.

If you have an app idea and have a way of getting it developed yourself, by all means we’d love to see that happen. But too many ideas get stuck in people’s heads because they’re afraid to share them, and they die in there. Why not get that idea out and share it with the world?