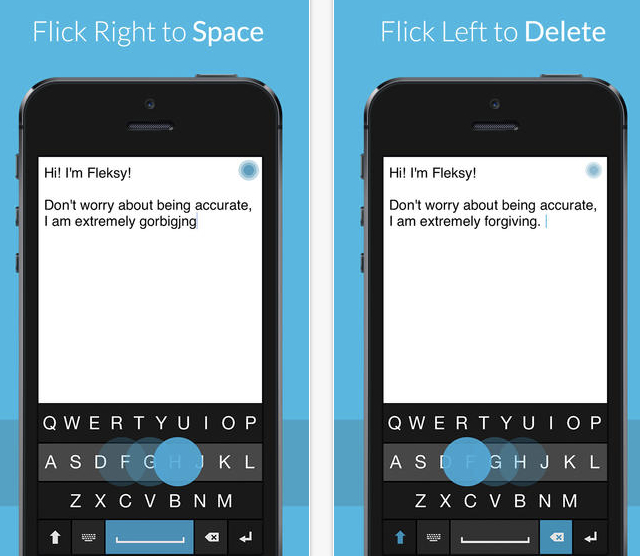 From the minute touch screens became the de facto smartphone interface, power users have looked for methods to replicate the superior typing experience of a full-QWERTY keyboard – some have been more promising than others. However, while Android features a handful of alternatives to its stock keyboard (SwiftKey, Swype, and Toronto’s own Minuum, for example), iOS users have been mostly left in the cold.

Apple currently forbids 3rd party keyboard applications from replacing the default iOS keyboard, leaving developers hard pressed to replicate their Android success. Fleksy, for example, operates as a standalone composition app on iOS with quick links to copy and paste, or share your words of wisdom via Messages, Mail, and select social networks. Fleksy’s text prediction engine works just as well, and the company claims over half a million iOS users, but mass adoption will likely remain elusive in such a limited format.

Today, Fleksy released its first SDK for iOS as an end run against Apple’s keyboard restrictions. The SDK lets developers to integrate Fleksy’s keyboard and text prediction engine into their application with a line of code, allowing users to toggle between the default iOS option and the more advanced Fleksy offering. Fleksy is currently limiting SDK access to approved parters to ensure a consistent experience, but it’s easy to imagine open developer access if things go well.

With the right app partners, things could go very well for Fleksy. Evernote integration could give the note taking service another feature to bolster its Premium account offering (with a revenue cut for Fleksy, of course); Facebook could integrate the keyboard to bolster its mobile accessibility (Fleksy, which promises a ’no-look’ typing experience, was initially tested by blind smartphone users to help improve its prediction algorithm) or combat  a deluge of messaging app competitors. It’s hard to imagine a popular iOS app that wouldn’t benefit from a better keyboard (ok, maybe not Instagram).

In a perfect world, success on iOS would eventually render Fleksy’s SDK obsolete by demonstrating a clear demand for keyboard alternatives, forcing Apple to loosen its restrictions (don’t laugh: it happened with in-app subscriptions). Until then, iOS users looking for a better typing experience will just have to wait.