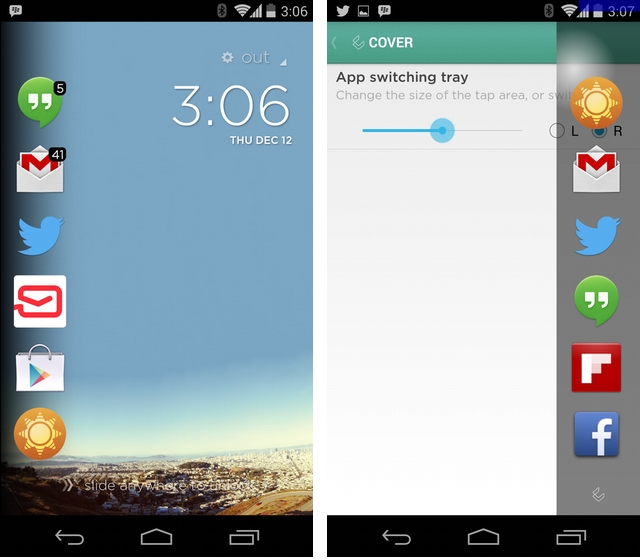 When we last talked about Cover, the contextual lock screen replacement for Android, it was in private beta and attracting a lot of attention.

Since then, the company has worked very hard on turning a compelling concept into a market-ready product that thousands, if not millions, of Android users would want to install. Now available in Canada as a public beta, Cover is nearly as good as it promises to be, and could turn into one of those products Android users install by default.

First, the app keeps apps in the fore based not only on external factors — what others use at a given time of the day — but on your own usage patterns. Various profiles — Home, Work, Car — offer what they consider to be the most useful apps, such as Google Maps and Songza when driving home from work.

Improvements in the back-end ensure that the app sips, rather than gulps, battery, and better detects when you enter a vehicle. And since the app was announced before KitKat was released, the team at Cover had to rework a few things to ensure it worked well with the Nexus 5 and Android 4.4. It even works well with ART, the new Android runtime that Google is experimenting with.

I found that peeking — the ability to swipe to quickly check what’s happening in an app — was not as fast on the Nexus 5 as the company’s demo videos, but worked quite well in practice. The onboarding experience, however, provides users with many tips and tricks to making Cover useful to their particular use cases, and advises a timer lock to prevent a pin/lock code getting in the way of peek too often.

Cover isn’t trying to be a launcher replacement like Nova, Go Launcher and Aviate, but it does perform many of the same functions. Its app switcher, which can be seen in the top-right photo, is useful in some situations, but doesn’t really do anything better than Android’s own multitasking menu.

Cover needs to continue improving on its battery usage while iterating on features that Android users actually want. Hopefully by the time the app is out of beta, likely in the new year, it will have worked out the majority of its remaining issues.