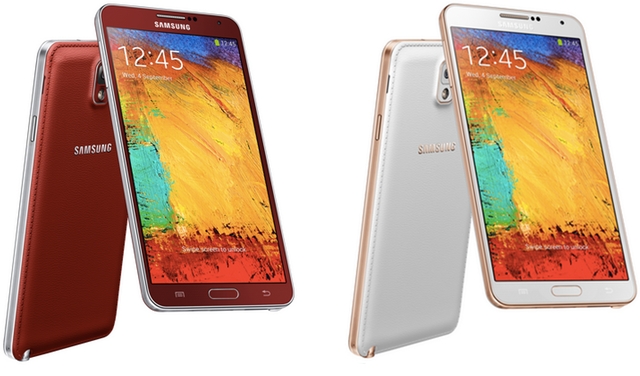 Like many Galaxies before it, Samsung is set to introduce new colours to its top-of-the-line Note 3 product in early 2014.

According to uploaded assets from Samsung Argentina’s webpage, the company will announce the Note 3 in red, a colour we’re familiar with, and, a few weeks later, Rose Gold, a brand new combination of hues.

There is no indication these are going to swim upstream to North America, but I wouldn’t be surprised to see carriers announce one or both of the newer variants as a way to differentiate themselves in the months ahead. Introducing new colours has been a very effective way for Samsung to keep their brands in the spotlight after hitting store shelves.

Though Samsung already sells a white version of the Note 3, the Rose Gold variant should appeal to customers who want something a bit more flashy. The red one, on the other hand, looks really nice, and would definitely be worth waiting for if you haven’t invested yet in a new device.

Update: Looks like the news is official this morning: Samsung has announced three new variants of the Note 3, Rose Gold White, Rose Gold Black and Merlot Red, in addition to the existing Jet Black, Classic White and Blush Pink versions.

No word on whether they’re coming to Canada, but you can bet one or two carriers will be offering some Merlot Red in time for Valentine’s Day.