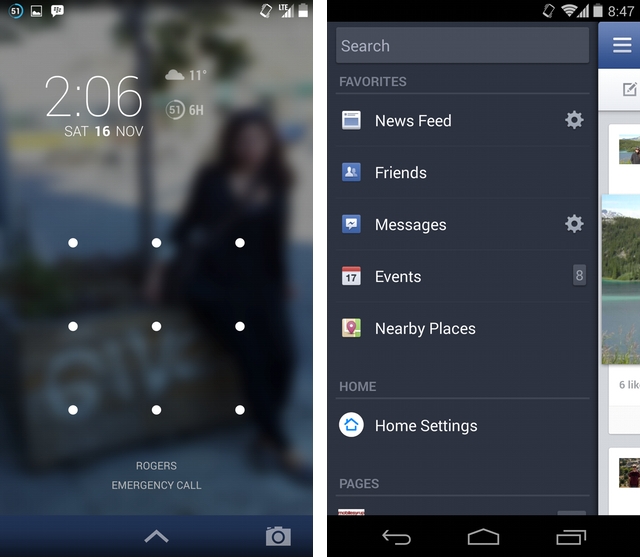 Specifically, the company’s strange Android launcher replacement, which adds friends’ photos and posts to your lock and home screens, has met with mediocre download rates and a tepid response from critics, many of whom didn’t appreciate Facebook’s heavy-handed approach.

Though the software is still in its early stages, and is limited to a handful of devices like the Galaxy S4 and HTC One, Facebook has been willing to experiment with the functionality. When users expressed disappointment that they were only able to swipe through Facebook friends’ photos, for example, the company added support for Instagram, Tumblr, Pinterest and Flickr. When users decried the lack of widget and icon dock support, Facebook readily added them.

Now, Facebook is attempting to give Home a wider appeal by integrating portions of the app into the proper Facebook for Android. As seen in the latest beta builds, it’s now possible to access certain Home features from the sliding menu. Specifically, Facebook has taken the lockscreen replacement and, in lieu of a full launcher replacement, added a live wallpaper to facilitate the same functionality on existing launchers. 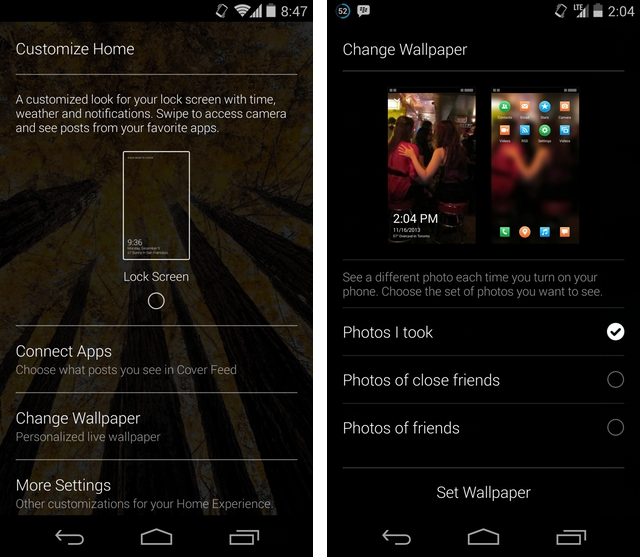 This allows Facebook to roll out the new features to millions of existing Android users without asking them to fuss around with launcher replacements; the settings are integrated seamlessly into the proper Facebook app, and I’d imagine the company will add a tutorial of sorts when it reaches the mainline version.

The most interesting thing about the integration is a new live wallpaper, which essentially sits on top (or behind, if you insist on being specific) an existing launcher and cycles through photos and updates from the services one previously linked — Instagram, Tumblr and Flickr included. While it’s not possible to interact with the wallpaper as with the full Home launcher, Facebook does install a shortcut to a Home “app,” which moves the lockscreen functionality into a sandboxed environment. Users can choose to look at photos they took, or ones their friends took, or both, and have them cycle intermittently through both the lock and homescreens.

If it all sounds a little confusing, it’s not just you; Facebook is clearly working out where Home works best, and how it will eventually manifest itself, both within and outside the Facebook app proper. It’s clear, though, that Home isn’t disappearing anytime soon, and in fact may be more visible than ever when it is more fully integrated.