Google releases Play Music app for iOS, but Canadians have to jump through hoops to get it 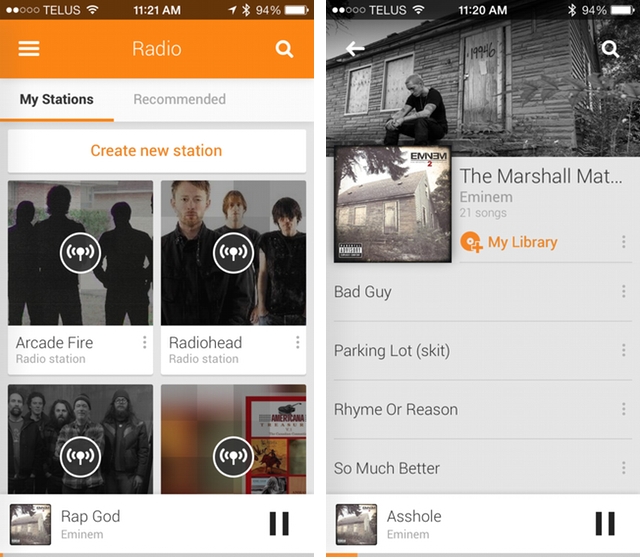 Six months after the service debuted on Android, Google has released a Play Music app with All Access for iOS devices.

Unlike the Android version, which comes preinstalled on most handsets in Canada, the iOS version is not available in the Canadian App Store, so those with existing Cloud Locker accounts will have to log in with a U.S. Apple ID to download it.

Once that’s done, though, you’ll find an app that looks and acts remarkably similar to its Android counterpart: it has a left-side sliding menu with a Roboto variant, Chromecast support, and various sections of music depending on your subscription.

While Play Music has been long rumoured to launch in Canada, at this time we’re limited to storing local music in the cloud — 20,000 songs — and even that is a little difficult to maneuver. The free service must be accessed via an American IP, either from within the country itself or using a VPN (though we’re heard that the service is blocked even with a VPN in Canada).

The prerequisite for downloading Play Music on an iOS device — right now, the app is limited to the iPhone, but iPad support is coming — is a U.S. Apple ID, which you can sign up for without a credit card. Once you’ve logged out of the Canadian and into the U.S. App Store, Play Music will show in the search results.

Apple is expected to launch iTunes Radio in Canada early next year, bringing some of All Access’ features to iPhone and iPad users. In the meantime, subscription services like Rdio, Deezer and Slacker are legitimately available, and feature excellent multi-platform ecosystems.