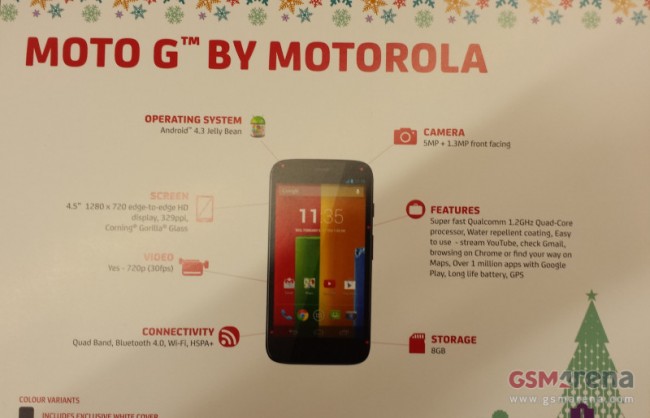 Yesterday, the first specs were revealed for the entry-level version of the Moto G, which was briefly leaked on Motorola’s own website earlier in the week.

The Moto G looks to share a visual design with the more expensive Moto X, but will use cheaper materials and internals compinents to lower the cost to around $200 CDN.

We’re looking at a holiday release date, perhaps mid-December, but it’s not clear whether the Moto G will come to Canada. It’s also not clear what will set the Moto G apart from the rest of the entry-level Android pack, since it appears to lack the X8 processor and AMOLED screen that facilitate the Moto X’s best features, Touchless Control and Active Notifications.

Like the Moto X, there will be both black and white versions of the Moto G, but it’s rumoured that the phone will sport replaceable colour back covers.