Though it wasn’t specifically mentioned during the keynote, Apple has updated its iPhones and iPads to iOS 7.0.3.

One of the major improvements is the ability to turn off those garish and too-long transition animations when opening and closing an app. Though they are still on by default, you can head to Settings/General/Accessibility/Reduce Motion to enable it. This not only makes older devices like the iPhone 4S feel faster, but the fade-in transition actually looks better. 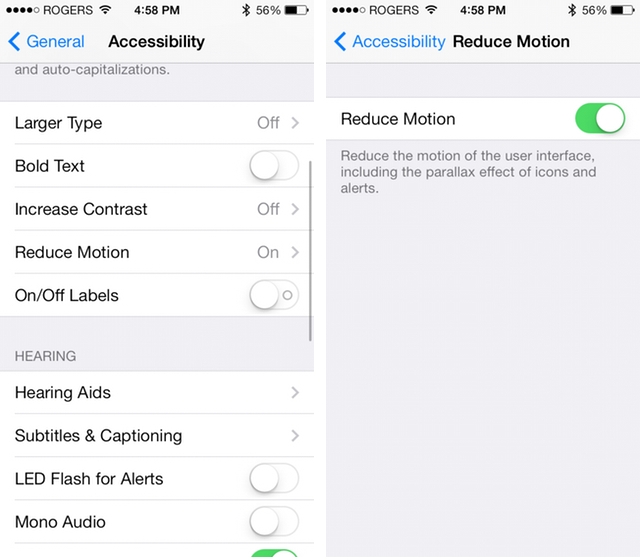 Apple has also added iCloud Keychain to iOS 7, which was promised back at WWDC, to correspond with the release of OS X Mavericks. This allows you to store account names, passwords, and credit card numbers securely, using high-level encryption, between devices. This is a great feature for those who use different passwords for various accounts and tend to forget them. Of course, a master password is still needed to access this data, but a Password Generator has been added to Safari so new passwords can be much harder to crack.

iOS 7.0.3 also adds back the ability to search the web and Wikipedia from Spotlight, features that were conspicuously absent from the initial iOS 7 release in September. There are also improvements to the iPhone 5s-specific Touch ID feature, making it more consistent even when fingers are not placed in the position in which they were originally read.

Lastly, there are bug fixes galore, including a lingering issue where an attacker could gain access to parts of the device from the lockscreen, even with a password in place.

Head to Settings/About/Software Update on your iOS device to initiate the 92MB download.