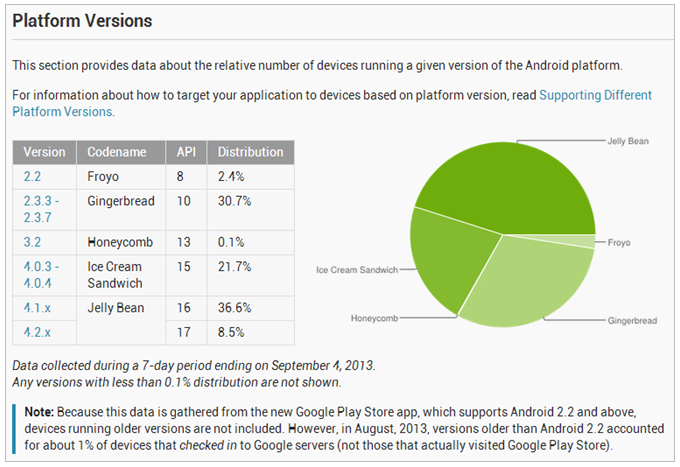 After a couple years of hanging on by a small percentage, both Eclair and Donut (Android 1.6 and 2.1) have both jumped ship from Google’s monthly Android distribution chart. The main reason for this is the new version of Google’s new Play Store app, which only supports devices running OS 2.2 or higher. Google does note that Eclair and Donut accounted for “about 1% of devices that checked in to Google servers.”

Digging deeper into the September numbers reveals Jelly Bean is on 45.1% of active devices, up from 40.5% last month. Android 4.0 Ice Cream Sandwich dipped by one percent to 21.7%. Missing from the list is the newly released Android 4.3 Jelly Bean, but since more devices will become available over the next few weeks we’ll certainly see this flavour make itself known.

Since Honeycomb has all but vanished, with less than 0.1% of devices, it’s safe to say that the remaining festering sore on Android’s record is Gingerbread. Android 2.3 still comprises 30.7% of all active users, with Froyo at a quickly-diminishing 2.4%. Many developers have cut off those pre-ICS Luddites, requiring Android 4.0 and above as a minimum, but until Gingerbread disappears, there will continue to be a division between modern apps — those that take advantage of Android’s newest and most effective APIs, and those that simply cannot. Most devices still running Gingerbread don’t support the newest versions of OpenGL, and lack GPU-based acceleration within apps. Gingerbread users also can’t interact with the camera, Bluetooth and NFC the way Android 4.0+ devices can, so developers are forced to create apps with two separate feature sets, or omit functionality for newer users. It’s not pretty. The faster Gingerbread dies, the better the Android ecosystem will be.

We also wish Google would brake down these stats further, specifically on country basis.
What OS are you using now?