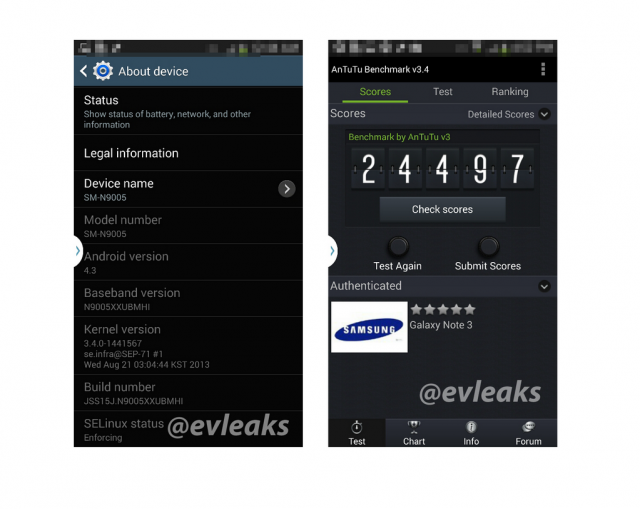 We’re only a couple days away from Samsung officially unveiling the Galaxy Note 3. This phablet is expected to sport a similar overall design as the Note II, with some enhancements that are familiar in the Galaxy S4. While several leaked images have pointed towards improved specs, such as a 5.68-inch display, the Note 3 has only make an appearance online in enthusiasts design renderings based on rumoured specs.

Today, with special thanks to reputable device leaker evleaks, a new set of specs has been confirmed for the upcoming Galaxy Note 3. EvLeaks reports that based on the ‘about screen’ and Antutu benchmarks we can expect the Galaxy Note 3 (model number SMN-9005) to come with a 2.3GHz quad-core processor, display that has a resolution of 1080×1920, pack in 2.5GB RAM and run Android OS 4.3 Jelly Bean.

Previous rumoured specs have the Note 3 sporting a 1.8GHz Octa-core Exynos 5420 processor, 3GB RAM, 13MP camera, LTE connectivity, 3,200 mAh battery, running Android OS 4.3 Jelly Bean. Finally, the Note 3 will come with the S Pen, but “stylus functionally the same as first two Notes.” Of course, nothing is 100% until Samsung reveals the truth about the device this coming Wednesday.