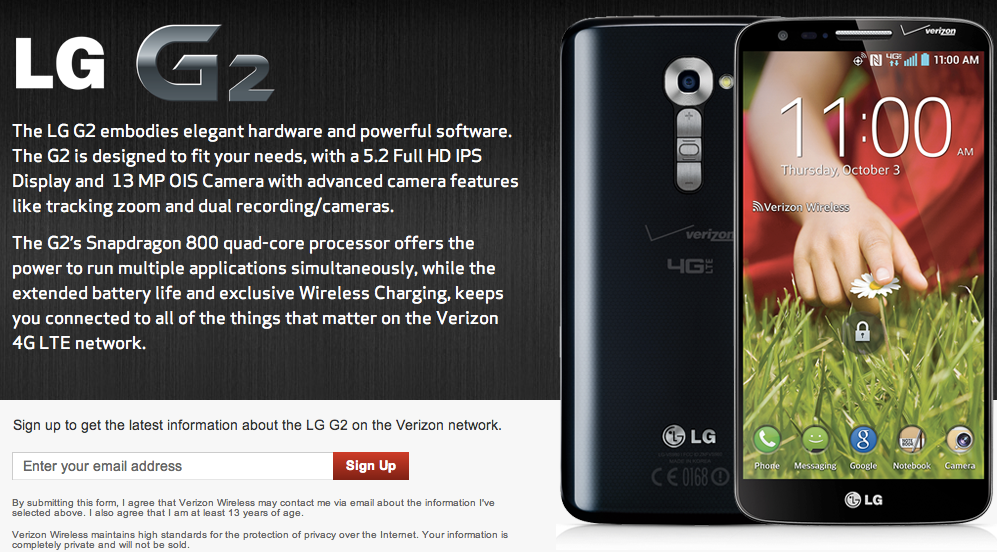 Some hardware vendors, like Apple and Samsung, can convince carriers to release an identical product. It may sting them, but it’s possible. Carriers love reasons to differentiate their products from the rest, especially in the land of waning exclusives.

Verizon loves plastering their smartphones with unseemly logos, even going so far as to include one on the home button of the Samsung Galaxy Note II. Now, that same carrier who recently deferred its purchase of Wind and Mobilicity, has announced an exclusive version of the LG G2 with Qi wireless charging. It may make the device slightly thicker and heavier, but it’s a great feature. And it’s not coming to any other variants.

The Canadian carriers announced in tandem today that they will be blessing our market with both white and black models of the G2, but ever since using the Nokia Lumia 920, which has Qi charging built in, as does the Nexus 4, I’m hooked. It’s one of those things that just works: place your device on a charging pad and a gentle vibration later it is charging at the same speed as with a microUSB cord.

The issue speaks more to the measures larger carriers will go to separate themselves from the pack, and Verizon, as the largest wireless telco in the US, has a lot of clout with the manufacturers. While it’s possible that a version of the LG G2 with wireless charging will come to Canada, it’s disappointing that the company’s new flagship is not universally available with the technology.

It was also recently pointed out to us that the South Korean version of the G2 comes with a removable battery and microSD slot, something that wasn’t even mentioned during the US launch last week.

All these carrier-specific variations have us scratching our heads, and slightly frustrated, but that’s the reality of smaller OEMs trying to make nice with the carriers on which they solely rely for retail distribution. That is, until Google steps up its Google Edition game.

LG unveiling its next flagship on May 27th