Forte.fm, an Rdio player for BlackBerry 10, proves that HTML5 is a viable app solution 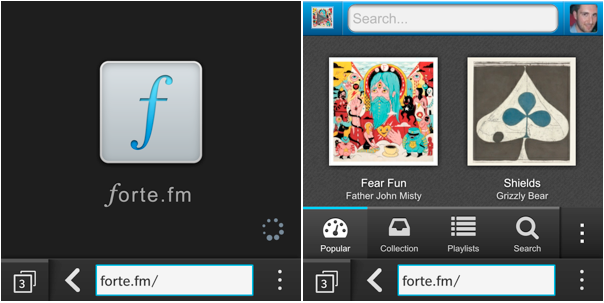 At this point there are a lot of iOS and Android favourites that haven’t come to BlackBerry 10. While it’s excusable on such a new platform to have a few missing puzzle pieces, there are certain features I’ve come to rely on when I invest in a new ecosystem, and Rdio is one of them.

The company has not confirmed it is working on a BlackBerry 10 app, though the spokesperson I chatted with seems to think it will come eventually, as Rdio “wants its service to be available to as many people as possible.” That said, there is a way to access Rdio on BlackBerry 10, and it’s actually quite elegant.

Forte.fm is a relatively new web app built in HTML5 that uses Rdio’s extensible and comprehensible developer API. It gives paying customers access to their Collection, Playlists, as well as the entire 20+ million song database. Non-users can listen to 30-second previews of each song.

The app’s greatest asset is its flexibility; it’s available to any browser with basic HTML5 support, including the Z10 and upcoming Q10, and because BlackBerry 10 supports background audio support, you can even leave the app and the music continues to play. You must, however, keep the tab in the fore of your browser to allow background playback.

The developer has made numerous improvements to the interface and performance, and while it doesn’t feel quite as zippy (nor as pretty) as Rdio’s native apps on iOS or Android, it’s a fantastic and comprehensive offering.

There are a couple of assets Forte.fm lacks: one is coming in the next release, and the other is likely impossible to implement. The app currently lacks a full track list when listening to albums, so while you can skip songs you can’t jump from beginning to end. Offline caching is also not available on the service, an example of HTML5’s limited caching abilities.

So while you wait for an official Rdio app for BlackBerry 10, rest assured you have access to a pretty fantastic alternative.