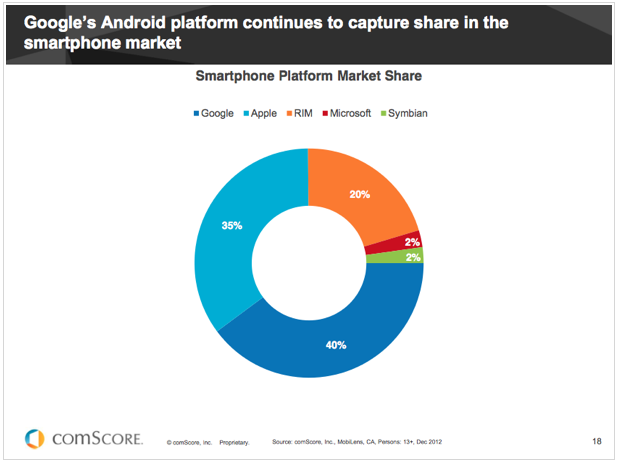 Research firm comScore has releases the “2013 Canada Digital Future in Focus” report today. There are some solid Canadian mobile stats in there and is based on “5,500 mobile phone owners in Canada.”

comScore states that as of December 2012 there were 22,076,000 wireless subscribers in Canada, an increase of 10% over last year. This number is vastly different that what the Canadian Wireless Telecom Association says with 2012 wireless subs reaching 27 million. Regardless, there’s still some good data. Apparently women account for 51% of all mobile subscribers, making 49% men. The average age of a wireless sub is between 35-54 with 35%, followed by 18-34 at 31%.

The report also indicated that 62% of Canadians own a smartphone. Google’s Android OS apparently has the most market share with 40%, followed by Apple’s iOS with 35%. BlackBerry is still dominant, but fell over the past 12 months, at 20% market share. Microsoft’s Windows 8 and Nokia vanished Symbian OS both represent 2% each. No word on the brands, or specific devices, that are making up for the 40% of Android’s market share.

According to the report smartphone users are accessing more data on their device with mobile TV and/or video jumping up 21 points (37% of users say they watch videos on their phone). Other notable actions users are performing are searching the web, using social networks such as Facebook/Twitter/Pinterest/Instagram, accessing their bank account and shopping online.

Check out some of the slides from the report below. 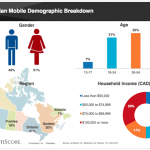 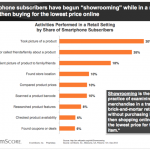 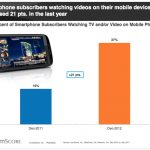 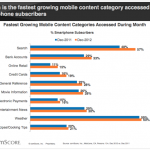