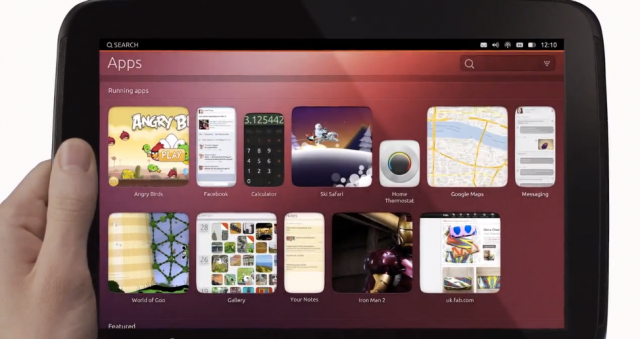 Canonical has introduced a tablet version of its popular Linux-based Ubuntu operating system, aimed at mid- and high-end ARM and Intel-based tablets. The interface is largely gesture-based, similar to the way BlackBerry 10 uses the outside edges of the screen and the bezel to initiate user actions.

The company is promising a true PC-like experience on the tablet, including an intuitive multitasking system that allows you to quickly switch between open apps, and use two apps side by side, such as watching a movie and taking notes at the same time, or collaborating on a document while on a Skype call.

Focusing on the ability to share content to multiple services, and with native and HTML5-based app support, there will be many apps available at launch. Whether these will be ports of BlackBerry or Android apps or mainly shortcuts to web services remains to be seen, but the company is advertising content like Ski Safari and World of Goo — ostensibly running natively — as well as web services like Evernote, Twitter and Facebook.

Ubuntu promises high-level security, with multiple account support, including a Guest Mode, and “world class encryption” for the enterprise market. All apps run in full screen, with controls activated via a bottom-up swipe. Similarly, all system settings can be accessed via a top-down swipe from within any app, allowing you to continue working in whatever environment.

The OS will support ARM’s Cortex-A15 chipset in both dual- and quad-core configurations, with between 2GB and 4GB of RAM and screens 7-10 inches in the low-end and 10-12 inches in the high-end enterprise space. Whether we’ll see these compete with consumer Android slates and Apple’s iPad remains to be seen, but it looks like a nice start for Canonical. Well-designed, easy to operate and, potentially, friendly to app developers, Ubuntu for tablets is another quality entry into the mobile OS space.