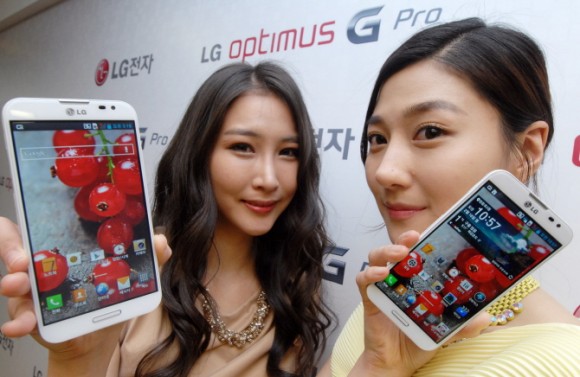 LG announced the international availability of its Optimus G Pro this morning, and promises to bring the 5.5-inch device to North America in the second quarter. While the company wouldn’t provide specific launch details, nor would it commit to any Canadian carriers, we’ll likely see the phone some time between March and May.

In addition to a 5.5-inch 1080p screen, which works out to a mouth-watering pixel density of 400ppi, the Optimus G Pro has a 1.7Ghz Snapdragon 600 chip, the successor to the company’s popular S4 Pro SoC. It also has 2GB of RAM, a 13MP back camera and 2.1MP front camera with the ability to do simultaneous shots (think of it as a panorama mode on steroids). The Optimus G Pro is the first product to ship with Qualcomm’s new Snapdragon processor, which promises a 40% boost over the S4 Pro.

The Optimus G Pro will ship with Android 4.1, with no word on an upgrade to Android 4.2.

We still think it looks too similar to the Note II for comfort, but that’s the way the industry goes these days. Copies of copies. We’ll bring you more when we have it.