Update: Bell and Virgin make changes to their cancellation fees, will now have “one consistent national policy” 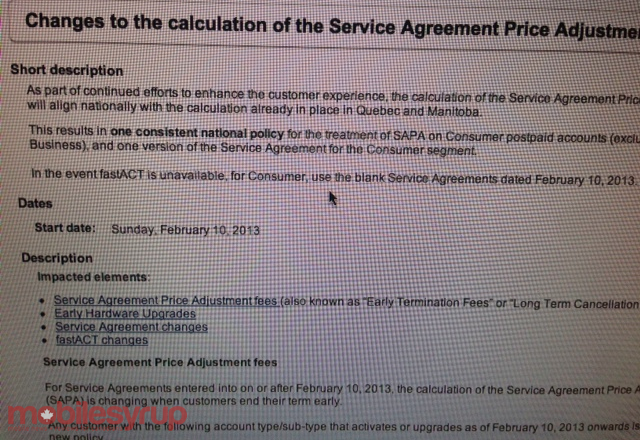 Similar to Rogers and TELUS, Bell will have “one consistent national policy” for their service agreements starting February 10th, 2013 – basically a new cancellation fee structure. According to the internal doc we received it states that “As part of continued efforts to enhance the customer experience, the calculation of the Service Agreement Price Adjustment (SAPA) will align nationally with the calculation already in place in Quebec and Manitoba.”

This “national policy” is on a similar track as Bill 60 in Quebec and Bill 35 in Manitoba that sees a customer pay out a calculated amount based on the number of months remaining on their contract. Rogers and TELUS adopted this structure and depending on the carrier there might be a fee attached. For example, Rogers has a “Service Deactivation Fee” that’s $12.50 on top of the charges. Taking a look a the Bell doc reveals there’s no additional fee, just a basic per month calculation.

Here’s how the breakdown looks:

Bell gave the example of a “customer received $250 in total device credits upon activation, and is cancelling their service 15 months into their 36 month term. Their SAPA would be $250 divided by 36 months (term duration), multiplied by 21 months (number of months remaining) = $145.82.”

In addition, for those customers that opted out of a subsidy but activated on monthly contract Bell notes that the “SAPA is 10% of their monthly recurring charges (MRC), multiplied by the number of months remaining (to a maximum of $50).”

Certainly a step in the right direction. Looks like the pending CRTC Wireless Code is making carriers listen to their customers and make the appropriate changes. Again, this new Bell policy goes into effect on February 10th. 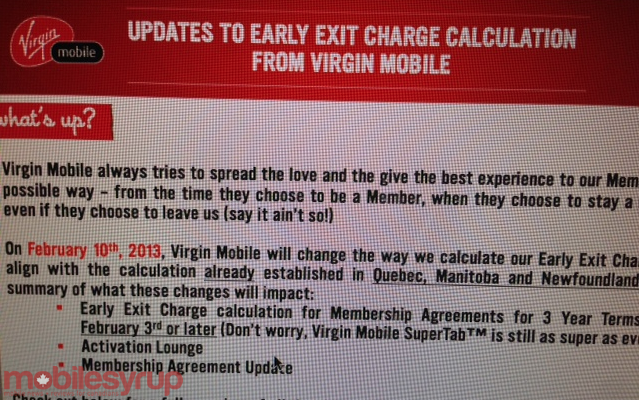 Update: We’ve been informed that these changes will also be implemented at Virgin Mobile on February 10th. Virgin’s changes impact their “Early Exit Charge” (EEC) and according to their doc is the following: “Early Exit Charge = (Total Hardware Credits / Total Months In Term) x Remaining Months in Term”