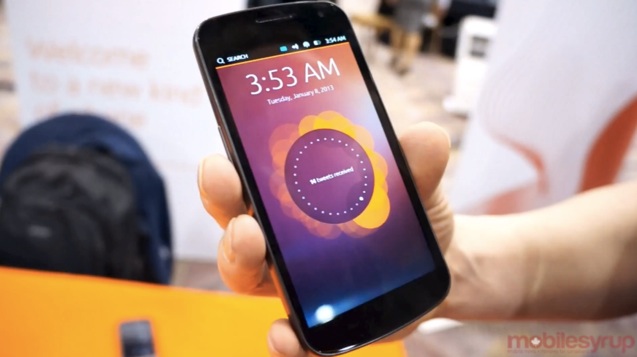 We were very excited to get a hands-on with Ubuntu’s upcoming phone OS, which will be available early next year on select handsets.

The demo was done during the Digital Experience showcase, and Canonical, the company behind Ubuntu for phones, was receiving a disproportionate amount of media attention from the rest of the vendors. It speaks to the excitement the media has for something new and genuinely interesting, though Canonical is not going as far as to say Ubuntu for phones will rival iOS and Android even after it was released.

I had a chance to do a hands-off hands-on — I couldn’t use the testing device, a Galaxy Nexus, myself, due to bugginess and unfinished software — but what I saw was extremely smooth. While Android apps were shown off as examples, Canonical is not saying that developers will merely be able to port over existing Android applications to Ubuntu; instead, much of the software will be HTML5 and open standards-based, similar to the doomed webOS which debuted at CES three years ago.

In fact, despite the cautious optimism about Ubuntu for phones, there are a lot of functionality similarities to webOS. But the trend stops at usability; the software will be shared with vendors and OEMs free of charge, much like Android is now, which they can alter and tweak for their purposes. This will allow branded marketing opportunities with low-level app integration, something that carriers love, which is why Ubuntu really has a chance of being successful. There is no centralized app store in the cards, though Canonical will likely adopt its desktop software repository for mobile.

As for functionality, Ubuntu for phones looked and felt great to us. It ran smoothly despite a few hiccups from the gesture bars. Because the software was retrofitted onto existing hardware, the company says these early demos bear little resemblance to the finished product, which will be smoother, faster and prettier. Nevertheless, the demo shown to us  and many other media outlets caused a huge commotion. Watch the clip below to find out why.