Jelly Bean now running on 10% of Android devices, Gingerbread falls below 50% for the first time in a year 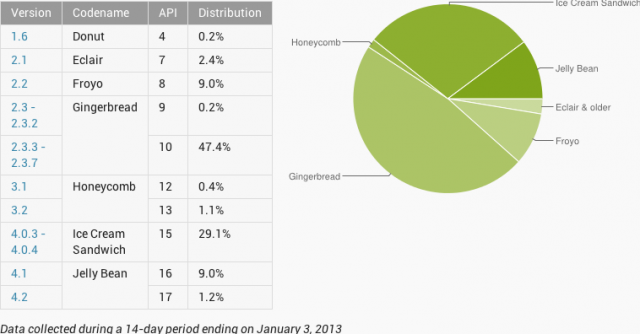 We knew it was coming today and, like clockwork, Google has released the latest Android distribution numbers. Good news for those looking for proof that users are readily upgrading their older devices. The number of Gingerbread users dropped below 50% for the first time in over a year. The big difference between now and a year ago is that Froyo is down to 9% from 30% and Cupcake, Donut and Eclair are barely blips on the radar any longer. Twelve months ago, too, Android 4.0 made up less than a percent of users.

Aside from the Nexus 4, there have been no smartphones launched with Android 4.2. The Nexus 7 and Nexus 10, along with a couple Asus tablets, run Android 4.2 natively, and there are a few thousand CyanogenMOD 10.1 users affecting the makeup.

Overall, though, things are looking relatively healthy for the Android ecosystem. Gingerbread may not be dropping as quickly as many users and developers would prefer, but it’s a slow and steady race to the top. This month also marks the first time that Android 1.5 Cupcake comprises less than 0.1% of the distribution chart; Donut should go next, and then hopefully Honeycomb.

For all the pertinent information, head on over to Android Developers.