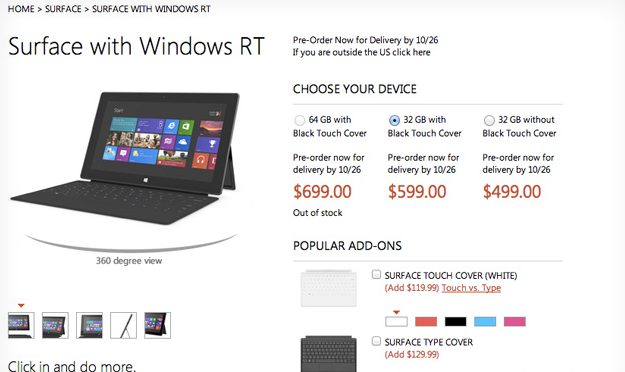 Microsoft has posted, and subsequently taken down, the pricing for its upcoming Surface tablet.

Microsoft is also selling the Type Cover, which is a thicker physical-key keyboard cover for $129.99. The Touch Covers look to come in a variety of colours, including white, orange, blue, pink and the default black. There’s no indication whether the Surface tablet itself will come in any other colours but black.

These prices are in USD, so it’s quite possible the Canadian pricing will be slightly higher. Many pundits, are potential buyers, were hoping that Microsoft would pull a rabbit out of a hat and price the Surface at below the entry-level iPad’s $499 price. Despite having double the default storage, this is going to seem like a loss for consumers, especially since the snap-in keyboard is, at minimum, an extra $100.

Microsoft released its first “Click in” ad for the Surface last night, and will be hosting pop-up stores on October 26th for the tablet’s, and Windows 8’s, release.