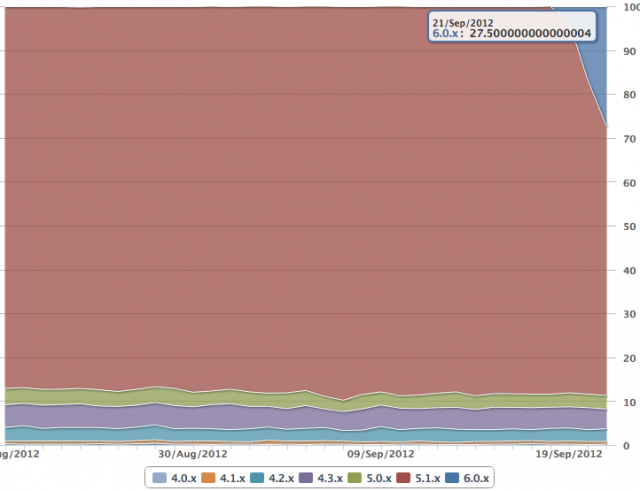 The iOS 6 train is not slowing down any time soon. Millions of customers upgraded, for better or worse, on Wednesday September 19th, and continue to do so at prodigious speeds. After less than two days on the market, iOS 6 now powers nearly 30% of devices, according to the developer of the universal app Audiobooks. While these numbers may skew somewhat towards the early adopter, the app is not demographic-specific nor especially specialized; in fact it would seem to appeal to a slightly older audience that prefers audio over visual books. Again, this is an inference, but seems plausible.

Nevertheless, the numbers jibe with those released from Chitika, which reported a 15% market share after only 24 hours. The app finds that the vast majority of users upgraded to iOS 5.1.1, the latest build before this current release, and that very few users are still on 4.x. It may be inflammatory to say this, but Apple knows how to update its devices.

Developers like it when users update their devices to the latest operating system, because there are usually new, more powerful and flexible APIs that they can plug into. Deprecating support of an older OS — in this case, iOS 3.x, allows developers to clean up vast amounts of errant and unused code, and focus on delivering the best experience to current users. This has been a sore spot for Android developers in recent months, as the nearly year-old Ice Cream Sandwich OS is still only running on one-fifth of Android devices. Due to the number of aesthetic and framework changes inside that update, developers would prefer to build apps specifically for that software, along with Jelly Bean, Android 4.1. Most software requires at least Android 2.2 or above, but there are a few (arguably better) apps, such as Chrome for Android, Boid for Twitter, and xScope Browser that are at a performance and feature advantage by limiting themselves to Android 4.x and above.

It’s impossible to compare ecosystems, however: Apple controls both the creation and distribution of iOS, whereas Google gives Android to OEMs for free to do with what they wish. iOS 6 being present on 30% of devices after two days would never be possible across the Android platform, regardless of how much power Google attempted to assert. Even its own Nexus devices are not updated at the same time.