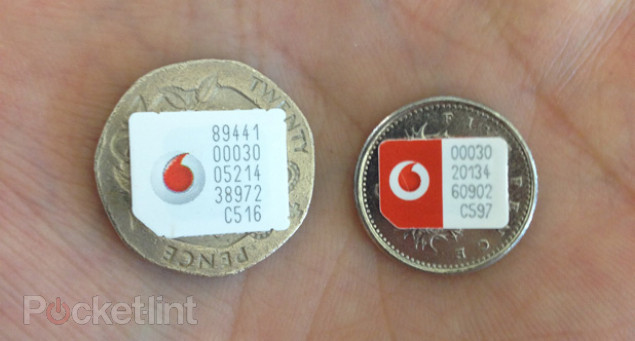 Vodafone UK leaked, and subsequently pulled, evidence of the upcoming nano SIM that will likely be used in the next iPhone revealed tomorrow. While the retraction statement issued to Pocket-lint states that the post was meant to (incorrectly, it turns out) detail the nano SIM slot inside the upcoming Nokia Lumia devices, it is more likely that the post was meant to show off a stockpile of cards meant for the iPhone 5.

It’s long been rumoured that among the many new features available in the iPhone 5, a nano SIM slot will be one of them. The standard was ratified earlier this year by ETSI, the European telecommunication body, and has a very similar design to the existing microSIM card. While it is pin-compatible with existing SIM cards, its actual size is some 40% smaller than the microSIM, giving phone manufacturers a modicum of more space for shrinking internal components.

Since the emergence and increased prevalence of the microSIM, a cottage industry has emerged fitting and “stamping” regular SIM cards into their smaller versions. But we’ve been told that due to the larger size of the contacts in the microSIM, it will not be possible to shave or cut it down to nano SIM proportions without damaging the copper. Obviously we can’t yet confirm this, but it seems likely that current microSIM owners will need to purchase new cards when upgrading their iPhones this week. That is, if the iPhone 5 is indeed equipped with a nano SIM slot.

All will be revealed tomorrow.