Here’s what the Samsung Galaxy Note 2 will look like 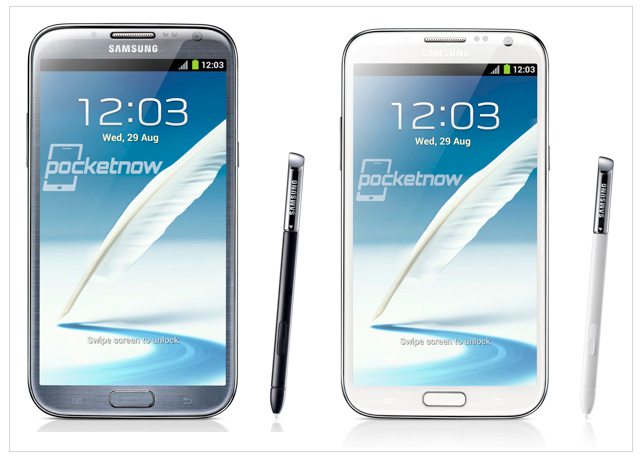 Samsung is only hours away from officially announcing the Samsung Galaxy Note 2, a follow-up to the highly popular Galaxy Note. PocketNow has scored themselves a couple press images of the phone/tablet, plus confirmed the following specs: 5.5-inch HD Super AMOLED display with a 1280×720 resolution (original Galaxy Note was 5.3-inches with a 1280×800 resolution). Samsung will outfit the Note 2 with a newly designed S-Pen, run Android OS 4.1 Jelly Bean, sport a 1.6GHz quad-core processor, 2GB of RAM, 8MP camera and a 1.9MP front-facing camera. In addition, we can expect the Note 2 to be thinner at 9.4mm than the original Note at 9.65mm. With it being thinner you’d expect a smaller battery, but Sammy has installed a 3,100mAh battery (the Note was 2,500mAh). Now there is a downside to the a bigger battery: it’ll weigh a bit more at 180 grams.

The S Pen seems to be getting a facelift. Apparently it’s longer and thicker, plus will come with a couple new features, such as “Quick Command,” “Screen Recorder,” “Popup Note” and “Air View” that “allows users to hover with the S-Pen over an email, image gallery, or video to preview the content without having to open it.”

The Galaxy Note 2 will be an LTE-enabled device, but no word on when this will be hitting Canadian soil. The report states that this will first launch in Europe this October in 16, 32, and 64 GB version. Finally, a couple colours: Marble White and Titanium Gray. No word on pricing, but that will reveal itself in a few hours.