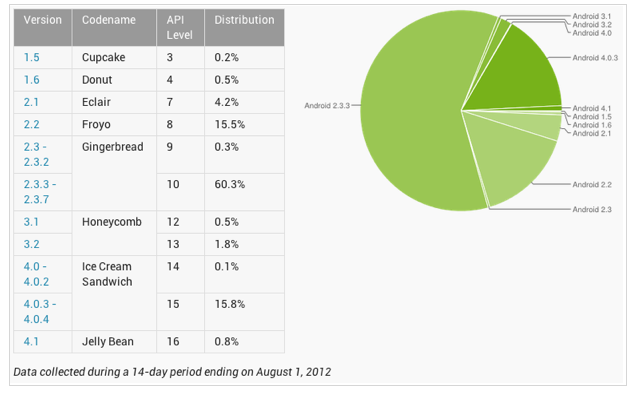 Google has once again updated the Android “Current Distribution” chart. For the first time they list OS 4.1 Jelly Bean – an OS that was officially announced on June 27th – accounting for 0.8% of all devices. This is a very good start. Ice Cream Sandwich (OS 4.0) has bumped up by a respectable 5% to 15.9%. Gingerbread is still leading the group and still powering 60.6% of Android devices, but dramatically declined by 6.1%. Cupcake and Donut stayed firm at 0.7%.

During Google I/O in June it was announced that there’s been over 400 million Android devices activated to date. In addition, Google Play has seen 600,000 apps with over 20 billion app downloads (1.5 billion downloads every month).

Where’s your Android device sitting at?