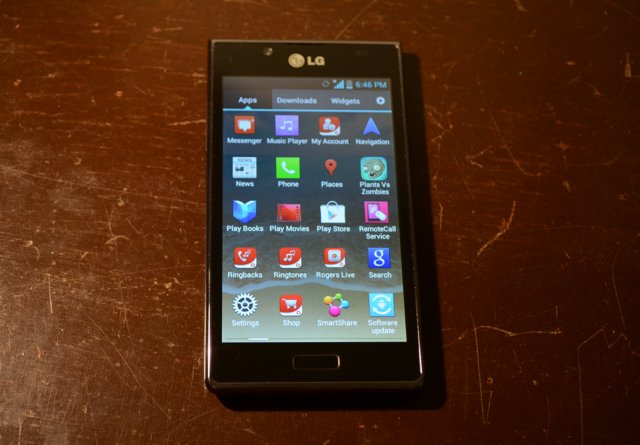 There is nothing like the feel of a new phone in the hand. You get to have a first impression, a quick take, as the tech moulds into your hand like second nature. The LG Optimus L7 is one such device that, upon first contact, feels much more expensive than it is. Made with premium plastics and a lovely textured backing, the phone is about as solid as you’re going to find in the sub-$300 Android market.

But while it excels considerably in the aesthetics department, it fails to pack a punch in terms of performance. Does style conquer substance with the Optimus L7? And how important a role does Ice Cream Sandwich play? Read on to find out. 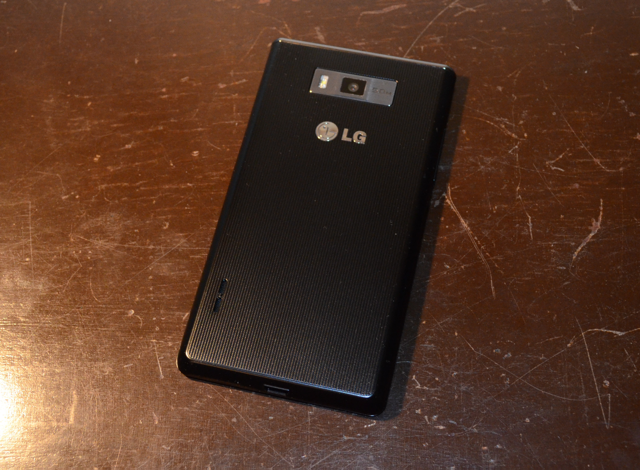 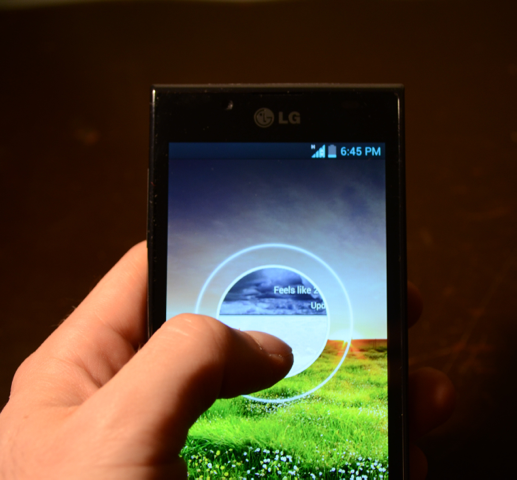 Using the Optimus L7 for a short period of time makes me really excited for LG’s lineup of flagship smartphones, the Optimus 4X HD and Optimus LTE 2. There is something clean and simple about the sloped edges and boxy finish. It is light without feeling insubstantial and extremely comfortable to hold. The power button is firm and easy to reach, though I’d have preferred it a bit to the left, and the dedicated home button has just the right amount of travel. It reminded me of the Galaxy S II home button — in fact, a lot of the Optimus L7 did.

From the bottom-centre microUSB port to the 4.3-inch WVGA display, the Optimus L7 looks a heck of a lot like the Galaxy S II. The dimensions are almost identical, and though the Optimus is slightly more curved around the edges, to most users they are dead ringers — until, of course, you turn on the screen.

The NOVA display does not measure up to its Optimus LTE counterpart, either in resolution or viewing angles. While the screen is pleasant to look at, and sharp enough, it suffers from poor colour saturation and terrible viewing angles. That the processor is too slow to respond to many screen presses on time doesn’t help either, but we’ll get to that.

There are better designed phones out there, but the Optimus L7 really does look great. It may have used an existing template in the Galaxy S II but which manufacturer doesn’t copy a little from time to time? More importantly, the device feels great in the hand. It just doesn’t work that well once turned on. 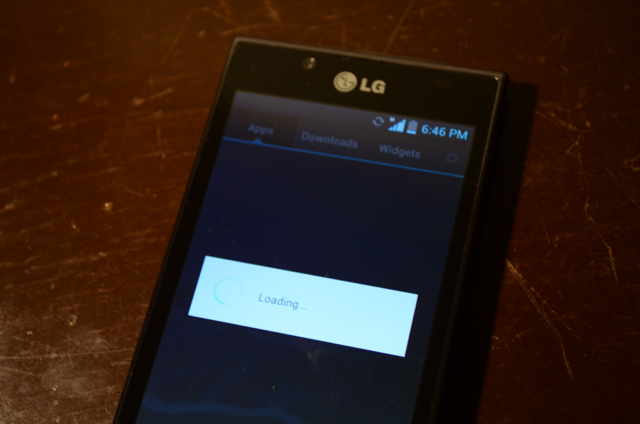 It’s a cruel fate to relegate an attractive device like the L7 to a bargain-basement chipset in the Qualcomm Snapdragon MSM7227A. Slower even than the Snapdragon S1 chip inside the original Nexus One, the 1Ghz processor is based off ARM’s aging Cortex-A5 design. While this ensures extremely battery-efficient usage the Optimus L7, even running Ice Cream Sandwich, is perhaps the most choppy Android device I’ve ever used. When we reviewed Motorola’s MOTOLUXE, which uses the same processor, I was aghast at some of the slowdown I experienced when scrolling through the home screens and operating system, but I chalked it up to Gingerbread just being Gingerbread. The Optimus L7 runs Android 4.0.3 and, at its best, is only a little bit slow. Mainly, however, there are one- to two-second waits between the most basic functions.

Opening up the app drawer nearly always results in a “Loading” screen; browsing a web page or loading up a list of songs in the Music app takes an unforgivably long time. Considering Sony was able to cram a 1Ghz dual-core Cortex-A9 chip into the Xperia U for the same price, I’m disappointed that LG didn’t have the foresight to do the same.

I did play through a couple rounds of Temple Run to get a sense of how the GPU held up and, to be honest, wasn’t particularly surprised to find myself dying more often that I otherwise would have. The game did run, and was smooth at times, but every few seconds the frame rate would drop to under 10fps, resulting in jagged discord. Whale Trail fared a bit better, leading me to believe that most 2D games won’t pose too much of an issue for the device.

Thankfully LG seems to have optimized its keyboard for performance, as I didn’t experience any of the annoying lag on the Optimus L7 as I did with the MOTOLUXE. I also had no issue streaming YouTube videos at standard resolution, though anything more intensive than the phone’s native res was too much to handle. 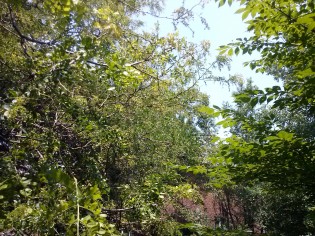 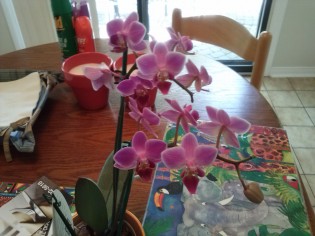 The 5MP camera on the Optimus L7 is nothing to tweet home about. It takes pictures relatively quickly with a decent amount of detail in the right lighting conditions. The interface is usable and clean, and provides all the requisite options you’d come to expect from a smartphone camera, including white balance, exposure and ISO, and includes a number of Scene Modes which seem to do little more than increase contrast and sharpness in lieu of photo quality.

The main issue with the photo experience of the Optimus L7 is that, like the rest of the OS, it is at times unresponsive. Loading the app usually takes several seconds, and though the shutter button will occasionally respond immediately, more often than not I was left waiting more than a second for the screen to respond, resulting in a blurry mess. 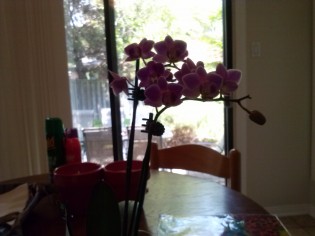 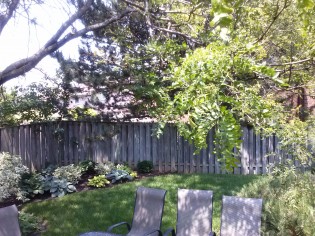 The rest of the details are unremarkable. Low light performance, as expected, was poor. The lens’s macro abilities were almost non-existant. It’s not impossible to get a good shot on the Optimus L7, but you definitely have to work at it.

And then there is video capture which is relegated to VGA resolution. Yes, in 2012 a smartphone is limited to shooting at 640 x 480. That’s just not OK. 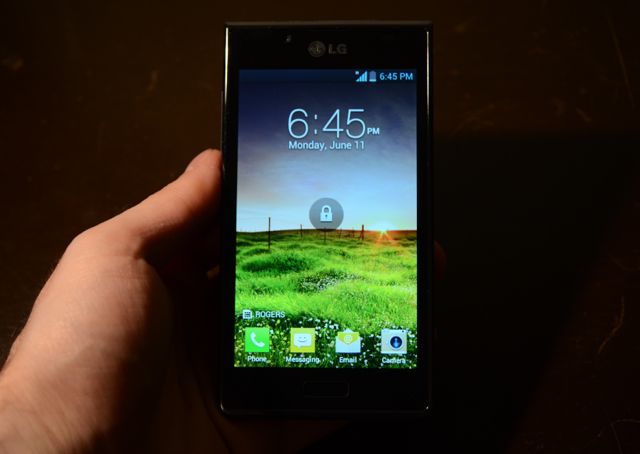 LG has prettied up Ice Cream Sandwich just enough to differentiate it from the rest of the pack, but also wisely left much of the functionality alone. You have a customizable four-shortcut lock screen and a cool “preview” view when you unlock the phone. Like TouchWIZ there is a five-icon customizable dock with an app launcher icon on the far right. The drawer itself is horizontal and divides your apps into “All”, “Downloads” and Widgets. You can also move and delete unneeded apps directly from the app drawer.

LG wisely included quick shortcuts at the top of the notification bar which can be quickly and easily edited to suit your tastes. We wish more OEMs would do this, to be honest, and hope Google includes it in Jellybean. LG hasn’t done much to skin any of the default apps, but includes its own DLNA player in SmartShare; Voice Control via Nuance; app discovery via SmartWorld; and remote tech support in RemoteCall Service. Rogers, too, has included its own suite of apps, including MyAccount, Rogers Live, Ringtones, Ringbacks, Shop and UrMusic. Some of these are more useful than others, as we’ve touched on in previous reviews.

Other than that, this is pretty much stock Ice Cream Sandwich, which is fine in my books. If it wasn’t for the performance issues, the interface would actually be quite enjoyable to use. 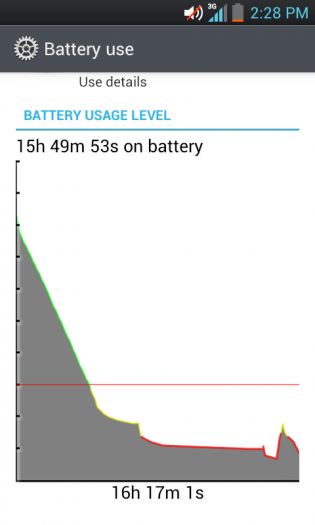 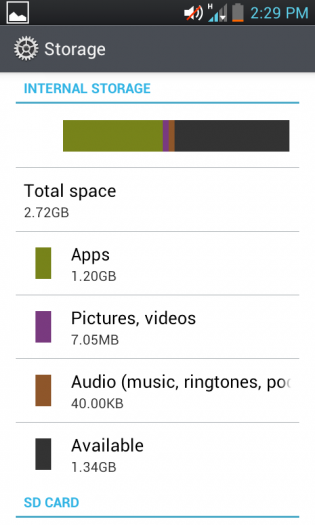 The Optimus L7 is equipped with a rather sizeable 1700mAh battery that had no problems lasting a day and then some. The processor inside the L7 is fairly power-efficient so we were happy to see the phone last over 16 hours on a single charge before finally falling into the red.

The device comes with 4GB of internal storage, but only 2.72GB is available to the user for apps and general storage. LG doesn’t ship a microSD card with the phone, either, so you’ll want to pick up your own if you aim to listen to music or watch any form of video.

It also comes with a baseband that supports up to 7.2Mbps in the downlink and 5.76Mbps in the uplink. I was able to consistently get 2-3Mbps over Rogers network, a number I’d be comfortable acquiescing to if it wasn’t for the fact that so many other low-cost devices are boasting basebands of 21Mbps or up. It’s rare the bottleneck these days is actually the phone hardware, but with the MSM7227A this is in fact that case. 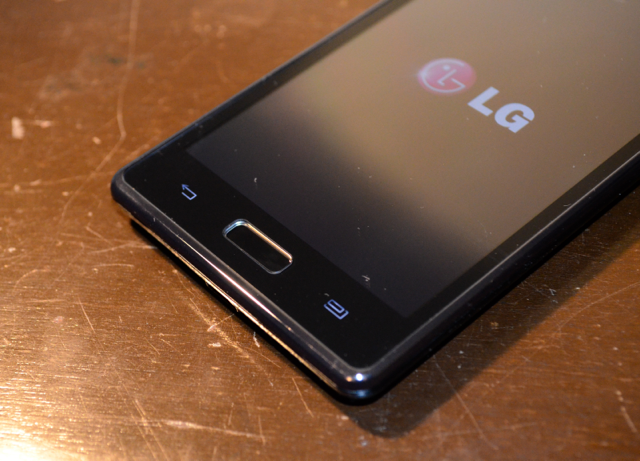 We had no issues with sound quality from either the headphone jack or the headpiece; calls came through loud and clear. More importantly, the phone was very comfortable to hold for long periods, something we can’t say about many of the oversized Android phones on the market today. 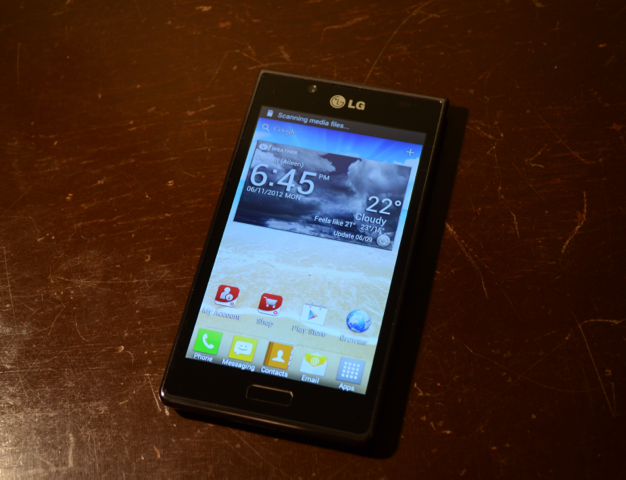 It’s no secret I was not enamoured with the LG Optimus L7. The best thing I can say about it is that it ships with Ice Cream Sandwich, and that its visual lineage bodes well for the rest of LG’s 2012 line-up. The rest of the story is a little grim: poor performance, inadequate network speeds and a generally underwhelming screen lack a compelling narrative at this price point.

Available on Rogers for 1c on a 3-year term or $274.99 outright, it’s certainly one of the cheapest entry-level Android handsets on the market, but we’d encourage you to look at other choices in the same category, particularly the HTC One V, Sony Xperia U and even the Nokia Lumia 710. 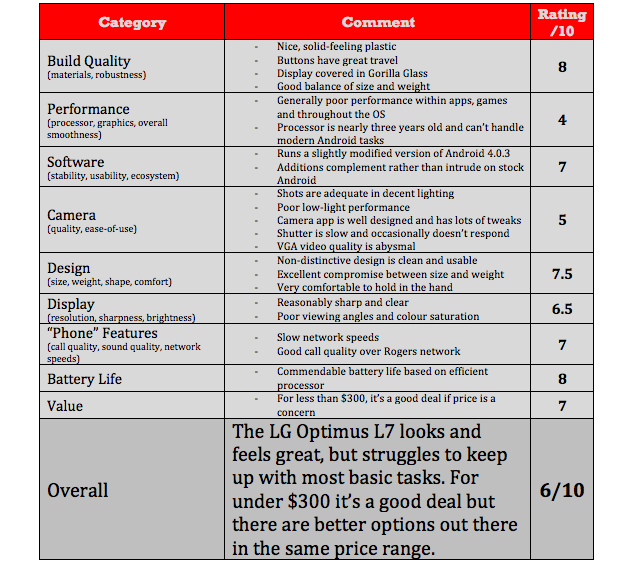