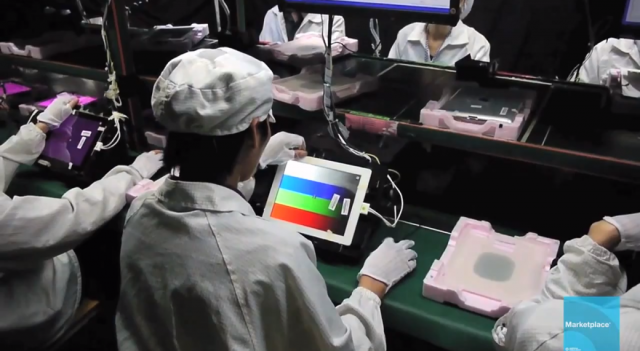 Foxconn’s manufacturing plants in Shenzhen, as well as many others around China, have been the subject of controversy in recent months since Mike Daisey, a freelance reporter and author, damned the company for poor worker conditions, knowingly poisoning its employees, and hiring underage workers.

Apple has been very forthcoming with its imperative to improve worker conditions among its many suppliers — even launching a campaign to promote it — and the company has allowed another journalist, Rob Schmitz, to record and broadcast a portion of the iPad manufacturing story. It aired in the second piece of a Marketplace segment titled From both sides of the gates of Foxconn, and shows the device going through testing near the end of the building procedure.

While it doesn’t show anything that would condemn either company — you can be sure it was heavily screened, edited and vetted by Apple — it’s the first glimpse the public has seen of the alien and unknowable places where thousands of Chinese workers spend their lives building devices many of them will never use. Check after the break for the video.

Source: Marketplace
Via: The Verge